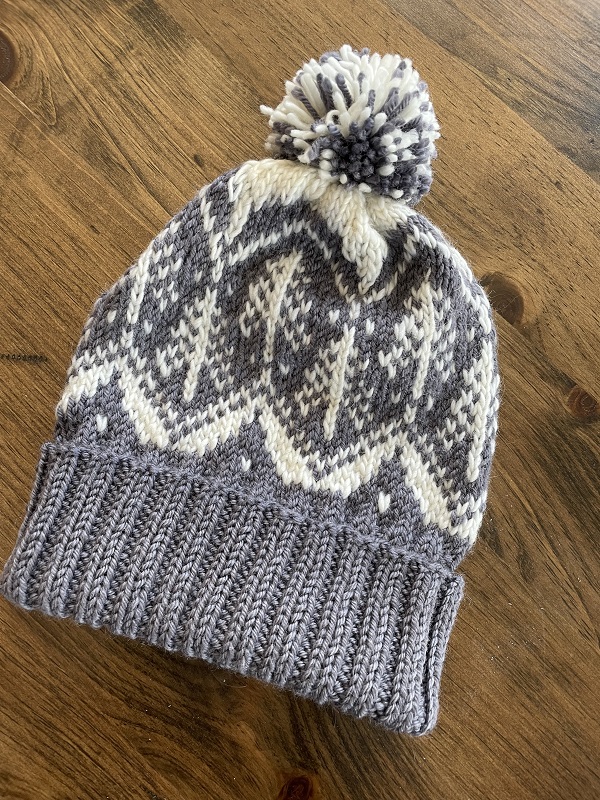 Today you get a little summary of what I’ve been knitting this winter!

Little did I know, all these years, that Paul would want a blanket to sit under while watching tv in the winter. He never asked and one day I just inquired if he would want one and I showed him this pattern – Big Cable by Marji LaFreniere (it’s free!). His eyes lit up and that was it – I was off and running to the yarn shop where I took some pictures of yarn and he picked out this heathered blue:

It is REALLY cozy – the cables give is a great squoosh factor.

Next up are these Hot Chocolate Mittens, a kit I purchased at The Spinning Room. Mirasol Ushuya super bulky yarn made these a quick knit.

I also continued with the hat theme that started this winter by knitting the Hiking in the Snow hat by Laura Aylor.

Laura Aylor is one of my fav designers and this is my absolute favorite-est hat of the season. I love it and it is very warm.

But there was another hat too. The Back Country Hat, which I knit with a skein of Periwinkle Sheep Merino Chunky (love!!!) in the “take time to rest” colorway:

Then there was the Candy Stripe Cowl, made with Miss Babs Kunlun yarn:

And the Abol cowl made with Queensland Collection Brisbane chunky yarn:

There were also a couple of impulse buys/knits including this knit-a-long with The Spinning Room for the Twindom shawl.

Super bulky yarn again, with super big needles (size 17) made this really quick to knit. I used 2 2/3 skeins. The pattern called for 2 skeins but I wanted to make mine bigger (it ended up 8 rows bigger).

Then there is my current knit-a-long project with The Woolly Thistle. They are doing a Colorwork KAL and I purchased a kit from them to make the Balvonie Bonnet (Ha! Another hat!) using Jamieson & Smith wool.

And, finally, I’m about to cast on for this other impulse purchase. Kristen In Stitches has a whole collection of yarn/patterns inspired by national parks. I had to purchase the Acadia yarn and pattern since Paul and I love, Love, LOVE Acadia.

Whew! So that’s the winter roundup of knitting.

Instant Pot Ramen was sooooooo good (enjoyed only by me since Paul is not a fan of Asian flavors):

And Whole Wheat Chocolate Oat Cookies from Smitten Kitchen were surprisingly yummy (and healthy) – I added flax seeds for crunch where it said to add wheat germ. Really tasty!

Last but not least, of course I have to add some pics of Moose and Smudge…

What have YOU been up to this winter?