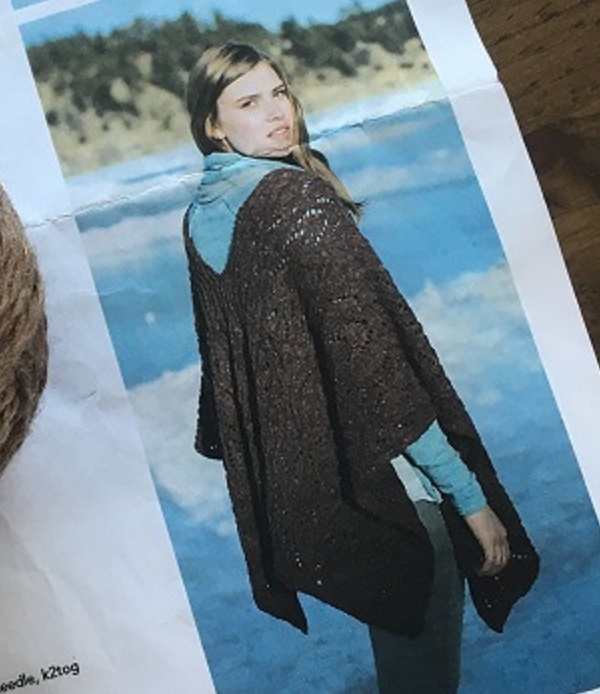 So, ponchos have been coming back into style lately. In fact, they’ve apparently been coming back since approximately November 1, 2018. That’s when I started the Elim Poncho, a beautiful pattern in the Winter 2018 Interweave KNITS magazine.

I loved it and got started on it right away:

I got about that far and put it down. I’m not sure why. HA! That’s a lie — I’m quite sure it was something to do with the next shiny-sparkly-eye-catchy pattern that distracted me.

But also, it was probably because it requires a lot of concentration. As you can see, there are several twisty stitches (cables). There were also two different charts, each with a different number of rows, so it took a little (a lot) of brainpower to keep track.

But it’s so pretty! And if you click on the pattern link up there you will see how REALLY pretty that lace pattern is (or you can look at the next picture, below).

Fast forward to about a week ago:

I frogged it. (For you non-knitters reading this “frogging” is when you rip out a project. It’s called frogging because you “rip it, rip it, rip it.” Get it? Say it out loud.) I picked it up to start it again, in my recent quest to finish up languishing works-in-progress, and within two minutes smoke started coming out of my ears because I couldn’t figure out where I was in the pattern (my scribbly notes were undecipherable), and I was asking myself what in the world made me want to start this?

So, knowing that this yarn, Plymouth Homestead, would still be great (nice and cozy) for a poncho, I went on Ravelry in search of another poncho pattern.

After three days down the Ravelry rabbit hole (really, about an hour) I found the University Poncho:

It was really cool (in a hip way, not a temperature way) because it has this asymmetrical cable pattern along the edges, but the rest of the pattern was pretty easy (and this was confirmed by several Ravelry users). So, I got going on that right away.

While it is a beautiful pattern, and it was in fact easy to knit, it just wasn’t doing it for me. I was on the fence about trying another pattern.

Then I saw a Facebook post by Marji who owns Marji’s Yarncrafts in Granby, CT. She had just finished The Comfort Zone poncho and it looked so comfy. I immediately went to Ravelry and realized I had passed on that pattern in my searches. The pattern pics were on a mannequin and it looked too froofy and elegant (or something) for my taste. Plus, I’m not big on turtlenecks. Plus there were 8,952 other patterns (seriously, 8,952 knitting patterns and 3,717 crochet patterns) on Ravelry to look through, so I kept on going.

But seeing it on Marji, in a different color, made me look at it differently. And when I clicked on the pattern page, I saw immediately that someone had made an adjustment to make a crew neck instead of a turtleneck. That did it for me.

So I’m going to start that one today!… After I finish the last few rows of my Halona shawl.

This is another long-time work-in-progress that I started in April 2015. I put it down because I realized that I would be running out of my main color (the green) and didn’t have more of it. I picked it up again the other day and realized I could easily just use one of the other two colors and it would look just fine. Funny how time (6 years) fixes those problems.

And I can easily get this finished up today. As long as this doesn’t happen again:

Plopped right down there, on top of my yarn and in the non-existent space between my needles and my pattern.

Notice I said “as long as this doesn’t happen again,” like I have no control over it. Ha.

I really can’t resist a warm kitty snuggle, though. Maybe he’ll be busy watching leaves blow outside the window.

Also, a tiny thought about spring came my way this week. My friend Lisa ordered her seeds for her garden and will be sharing her pink celery seeds with me! (the seeds aren’t pink, the celery is)

How cool is that? Who wouldn’t want pink celery? Anyway, since it is 7 degrees here today, it’s nice to think about gardening in the nice weather.

Have you knit any ponchos? Let me know in the comments what patterns you like (you know, in case I change my mind for the third time).

Have you heard of/seen/tasted/grown pink celery?