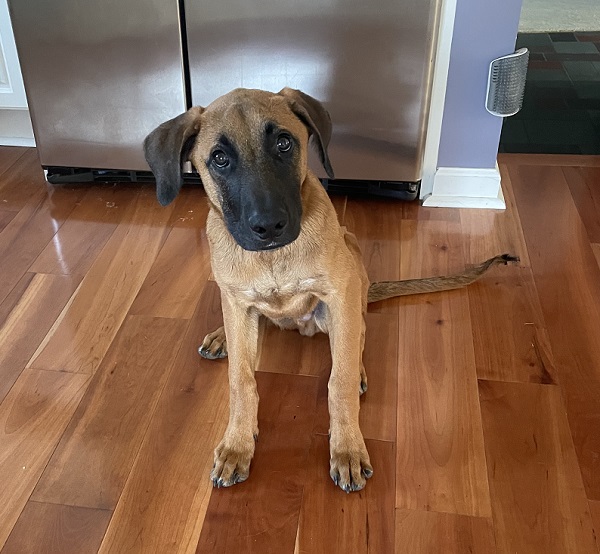 Well, just like that it’s fall so, today is a summer roundup post. There was a lot going on!

Did I mention we got a puppy? Ha! Moose is growing like a weed and has been the focus of our life these days.

We try to bring him “all the places” so he will love the car/truck. Including just out for drives…..

…. and to pick up some car dealership auction items that Paul bid on in Easthampton, Mass.

Moose was a very good boy that day.

We also went on vacation to Atlantic Beach, NC. It was a very. long. drive.

That is the 21-mile long bridge/tunnel/bridge/tunnel/bridge from Delaware to Virginia that we were stuck on for two hours. Notice the time on the car? We arrived at our destination at 11:30pm. It was a very. long. drive. (It bears repeating.)

There were some pretty views when we got there though!

And there was, of course, a trip to two yarn shops!

The Knit Knook was in Morehead City and The Salty Sheep was in Swansboro. (I forgot to get a picture of The Salty Sheep!) No pics of my purchases but let’s just say that on vacation I don’t usually hold back! You’ll see some of the items in upcoming knitting projects.

Also this summer, a friend commissioned me to make several dozen cookies to bring on her family vacation.

Chocolate with peanut butter chips, chocolate chip-Rolo, and confetti cookies. Paul enjoyed being the taste-tester. They came out great! And that was fun to do — who knows, maybe it will be my next side hustle….

We also went on a drag-racing trip to Cecil County, Maryland. It’s a yearly trip that we missed last year.

Pit-crewing and racing were done.

There was also the usual standing-around-the-engine-looking-and-discussing:

There is always LOTS of that. It was a beautiful day for racing and my first time out to be the pit crew chief since before the pandemic.

We also made a trip to the local yarn shop Vulcan’s Rest Fibers (before we even checked in to the hotel!).

Paul was a fantastic enabler as always.

Oh and my LYS The Spinning Room had a sale so I had to go there:

OMG I obtained a lot of new yarn for my stash. I better get knitting. And yes, I’ve been knitting but not as much as I’d like… did I mention we got a puppy? Next post will have some knitting updates.

One last thing to transition into fall …. I bought ALL THE PUMPKIN THINGS at Trader Joe’s recently:

Yes, there are TWO boxes of Pumpkin Joe-Joe’s because we already know we love those and if you don’t get them now, they will run out and you will be disappointed and have to wait a whole year to get them again (experience talking).

I hope you had a nice summer! Here’s to all the other fall things (besides pumpkin) like pretty leaf changing, apples, and crisp, cool days!