I’m no spring chicken when it comes to knitting.  I’ve been doing it for a lot of years and especially a lot (read: non-stop) for the past 6 years.  So, one might think that I don’t make many mistakes.  But one would be WRONG.

I was plugging along on my stealth knitting project and thought I’d take a partial picture of it to tease you on the blog.  When I did, I found this: 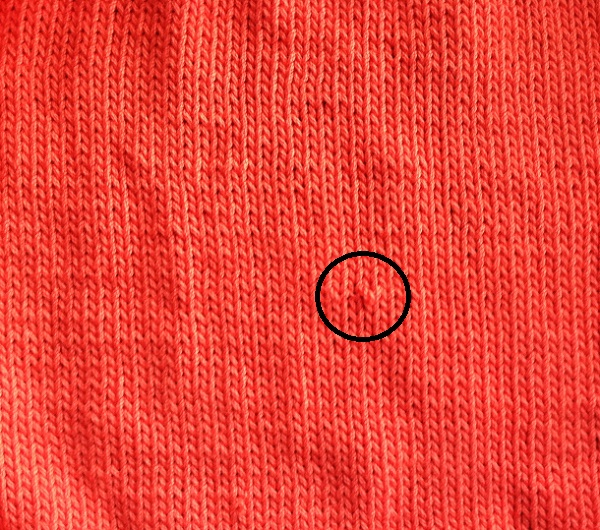 That may be hard to see in this picture, but it was glaringly obvious when I spread the knitting out to take a picture.  A big blob, right in the middle of a part I can’t tell you but where it would be really obvious.  It is a split stitch – meaning the needle only went into two of the six strands that make up the string so there was a really thin stitch on the left and a blob with the rest of the strands hanging out of the stitch on the right.  And it was about 8 inches back.  Here is what I did: 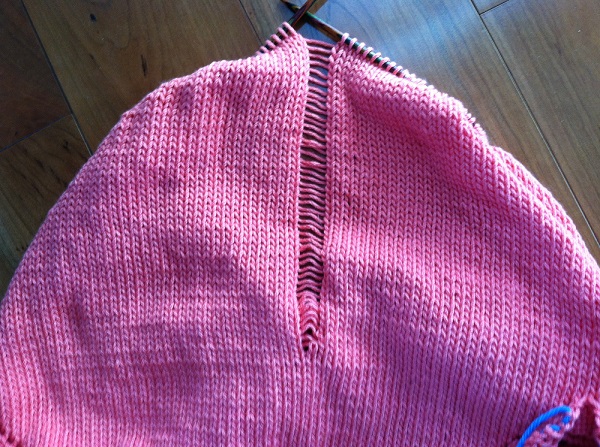 Doesn’t that look horrendously scary?  Not really.  I followed the blob up to the needle, then dropped the stitch all the way down and fixed the split stitch by undoing it and catching all the strands with a crochet hook.  Then, using the crochet hook, brought the stitch back up that ladder: 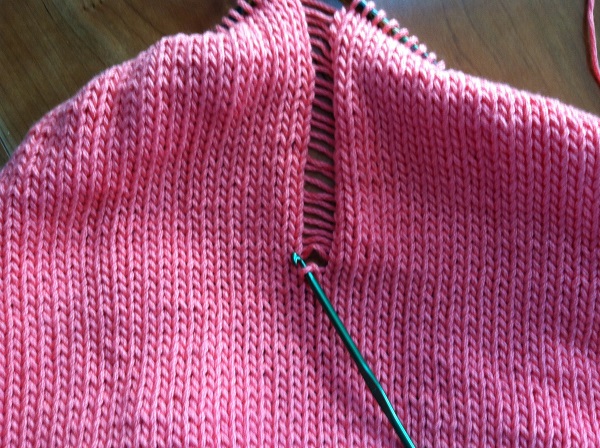 And then it was fine: 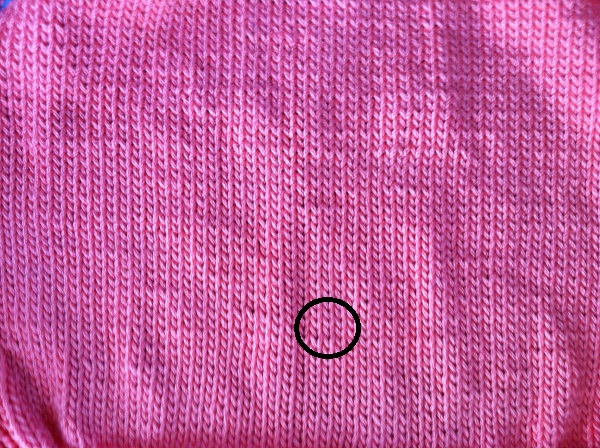 Full disclosure:  I don’t know if that’s really the spot that was messed up.  I actually couldn’t find it which is a good thing!  Also, the color in the first picture is the most accurate.  I don’t know why the other photos are pink.

But that’s not the only mess-up.  I started the Two-Socks-In-One project: 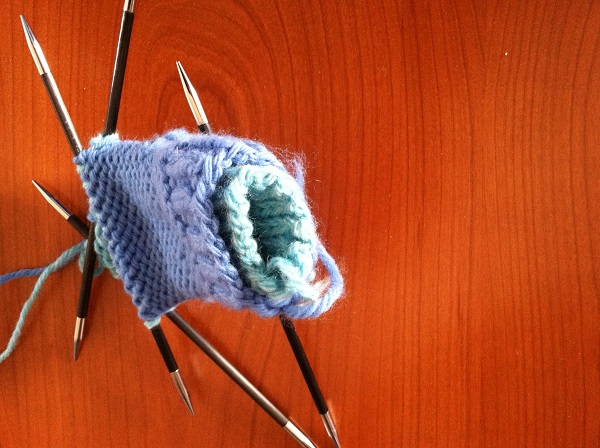 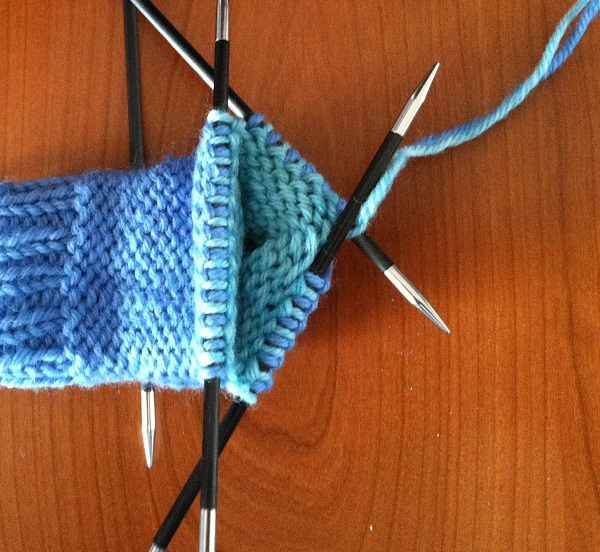 I’m learning this technique in order to teach it as a class, at the request of a yarn shop customer/student.  This is a training sample, which is why it is two different colors and makes it much easier to see what you are doing.  Knitting two socks on one set of needles, one inside the other but completely separate from each other.   Supposedly.  I got past the heel and gusset to working on the foot – in other words, almost done – when I checked things out and found this: 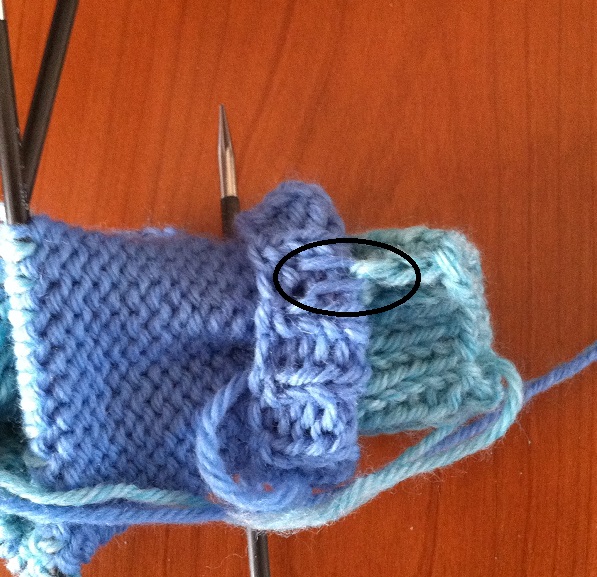 That is one little old stitch on one sock hooked onto another little old stitch of the other sock.  A mistake I made on row two of the ribbing – in other words, in the beginning.  It was noted in the pattern that this was the fussiest part of the sock for this exact potential mess-up.  So I noted it in my head and on paper to remind students in the class.  And I knitted very carefully to avoid that.  Apparently not.  So, since I am not willing to un-do both of those socks to get back to the beginning, since there is absolutely no other way to fix it,  I will simply highlight that part as an example to my students of what will happen if they think they are paying attention but they are not.

And in the category of dealing-with-people-who-seem-to-forget-I’m-no-spring-chicken-when-it-comes-to-knitting….  I finished my Vine Lace Vest last night.  Here it is un-blocked: 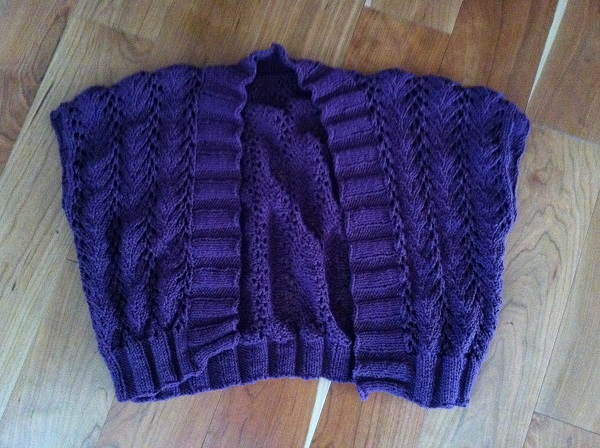 I tried it on to see if the modifications I made to the front band looked ok and turned to Paul who said, “I thought cropped shirts were ‘out’.”  It was, in fact, very short on me.  I took it off and stretched it to show him that it would “grow” once it was blocked and he said, “Hey, don’t stretch it!”  He thought I was going to ruin it.  I told him that anything lacey and sometimes ribbed is supposed to be stretched out when you block it, so that you can see the pattern better.    He looked at me warily and then we had a one-sided conversation about how some mechanical engineers think they know everything about knitting just because they think they can apply mechanical engineering principles to it.

Here it is after a soak and drying: 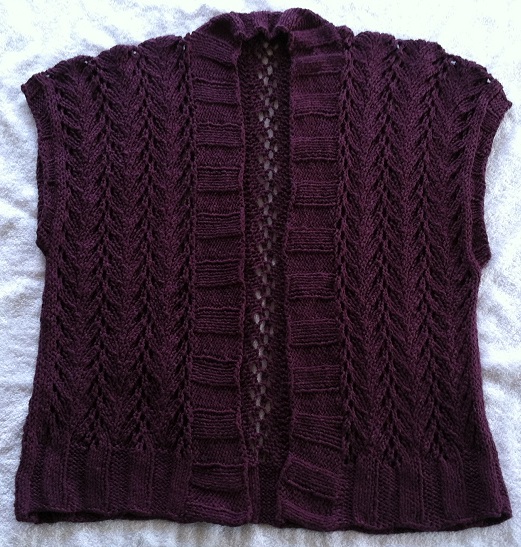 (That is the most accurate color photo.)

And finally, speaking of spring chickens, the doodlebugs made spring chick’s and planted grass, basil and tomatoes (right to left): 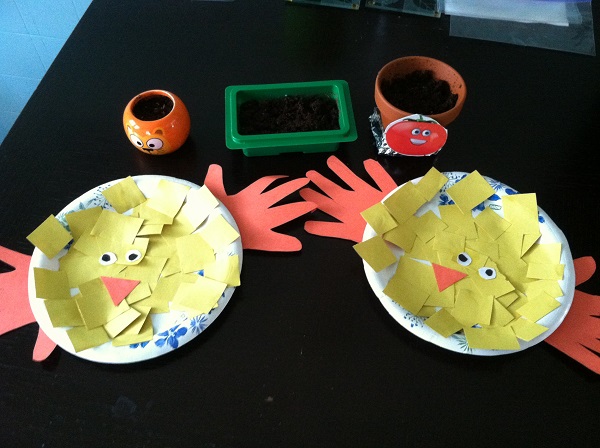 (Chick project from the Easter Chick post on the Glued to My Crafts Blog.)

2 thoughts on “No Spring Chicken”