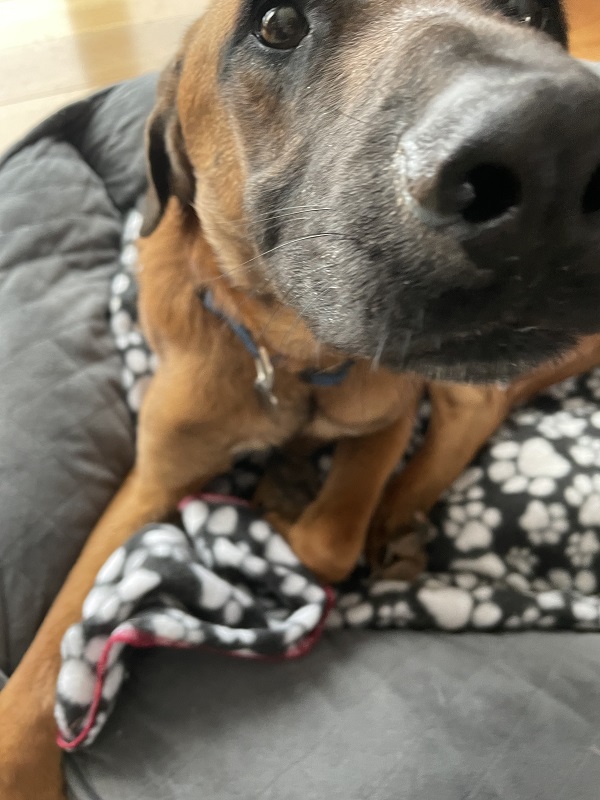 And then just as we’ve gotten that under control, he came down with a cold (who knew dogs could have runny, goopy noses just like a two-year-old? And that I’d sit near him all day making sure he could breathe ok?).

AND and a blocked salivary gland (the bump right above his whiskers).

We think we are now on the upswing of this, though, and he has been much more energetic the last day or two. He even got a cute bandana at his vet visit yesterday…

I don’t want him to stop being a lap dog, though.

In other news, bet you can’t guess what I’ve been knitting. Yup – HATS.

This is Acadia by Kristin Ashbaugh-Helmreich. It was a pretty quick knit with bulky yarn and I really like the pattern created by slip stitches and cables. Knitting it made me want to get back to Bar Harbor soon!

Then there was the impulse knit, Ripples Make Waves by Casapinka. I subscribe to Casapinka’s newsletter and she designed this hat to help raise money for Ukraine. The pattern is free but she asks that you donate the cost of the pattern to one of three charities listed in the pattern.

The crown has a sunflower pattern to represent Ukraine. Another nice, easy knit. I used HiKoo Sueno and made the large size, which ended up stretching a little too much when I blocked it. It’s quite slouchy, but that’s ok.

I also finished my Balvonie Bonnet which I knit from a kit obtained from The Woolly Thistle.

Love this adorable hat. I knit it to participate in their color work KAL (and hopefully win a prize?!?). I love the look of color work knitting but color work does not always play well with my patience. A hat this size with no colorwork would probably take me half the time to knit. This small project did the trick. Maybe if I knit more smaller projects, a larger one will be in my future. I love this Sage Throw by Marie Wallin for instance….

The whole pattern is one page long – a chart. This would likely be a century-long project for me. But so worth it, right???

I think that’s really it for hats now. It is going to be spring soon after all (…she says, as if spring means she won’t knit a blanket or a sweater tomorrow….).

Holiday Market at The Spinning Room