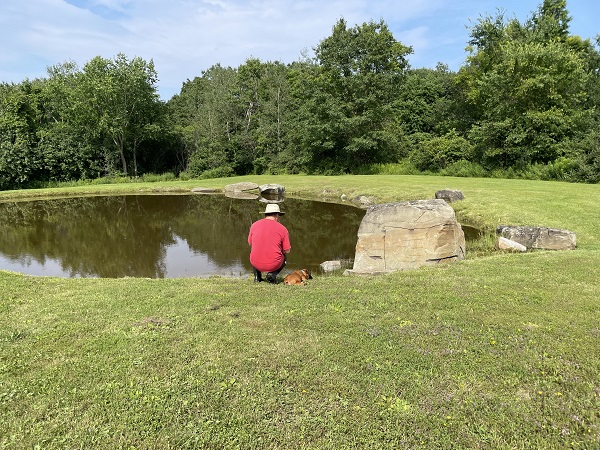 You know that whole idea around telling everyone you know (and maybe some you don’t because they read your blog) about a goal you want to reach because that will help motivate you to reach that goal? That’s totally what I had in mind when I told you about my July Knitting Challenge. You were going to be my accountability partner(s).

But as you know, this happened:

So, I’ll show you my “progress” on my July Knitting Challenge in a minute. But first, some updates on Moose:

We picked him up at the airport at 11pm when Jenny and Michael arrived home from their vacation, Moose in tow:

They are just the nicest couple and absolutely loved being Moose’s couriers.

We met them at baggage claim (Moose was a carry-on though!).

That was two weeks ago and he is now 14-ish weeks old and 19 pounds. We’ve all been very busy. First of all, he is adorable.

He goes on lots of walks and at lunchtime usually has a look-see at the pond and what’s going on there:

He is also creating quite a stick collection from his jaunts around the yard:

He’s been practicing being a good boy on car rides. We want him to LOVE the car:

Lots of playing, and getting that crazy-eye:

He’s also doing really well with training including “sit” and “down” and “wait” for food. House training is also going well (mostly).

Smudge is keeping his distance, but I have hope they will be friends:

That’s the Moose update! We love him to bits and, while we are still tired, we are so glad he is here.

On to my July Knitting Challenge progress!! Here it is:

Hooray! I have one flower motif done and I’ve started the lace/stockinette/reverse stockinette section:

And I still need to close up the provisional cast on hole:

That is about 25%-ish of the first half of the whole shawl. Gulp. It’s July 22. Don’t think I’ll be finished with this by July 31. But I will get as much done as I can and show you my continued progress. The next goal is to just have it done by the time the Altamont Fair comes around (August 15 is the submission date).

So, I’m falling short of my very publicly announced goal but I have the best excuse in the world, don’t you think?