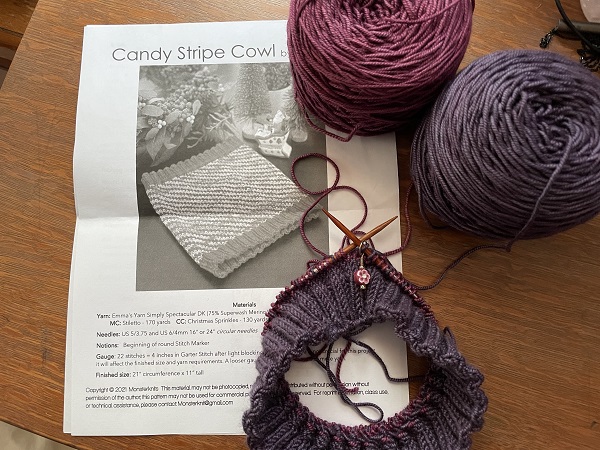 Yes, it’s that time of year. The time when the weather gets cold and the yarn just calls to me. I start starting (yes, I said “start starting”) every knitting pattern known to the universe. Every new pattern I see is “my favorite pattern I have ever seen” and has to be knit right away. It’s “startitis”: starting all the things and not being able to stop the starting. And there isn’t really a cure for it, except to knit your way out of it.

I knew it was coming. After all, I had all those hats and that cowl that I knit recently, in a pretty short amount of time….

Those were short projects and I finished them fairly quickly. But now, I started a project that will take me a little longer, the Inner Peace shawl. I’m a little further along on that since the last post.

But THEN, I re-discovered some yarn (Rowan Felted Tweed) I got on vacation this summer to knit a specific pattern (Dohne by Grethe Mensen). I saw a knitted sample of it at The Salty Sheep yarn shop in Swansboro, NC and just had to get the yarn and pattern. And now that I re-discovered it, I had to start it:

It’s a really pretty pattern that looks like cables but it’s not cables!

And ALSO, somewhere, somehow (Facebook maybe???) I saw the Candy Stripe Cowl by Cally Monster, in a really pretty color combination, and that got me reeled right in. So, I found some DK weight yarn that I got quite some time ago at the Fibre Space yarn shop and I started that:

That one will be quick to knit. But I’m still only half way done with another (beautiful) pattern of Cally’s, the Graceful shawl.

But IN ADDITION, Alicia Plummer, who is a designer I really like, came out with a new pattern, the Campsider (it’s a swancho!) and I knew I just had to knit that. I made her Campside Shawl several years ago and loved it. She has several pattern iterations of the Campside pattern stitches and they are all lovely. The Campsider is definitely up my alley because it is roomy, made with lightweight yarn, and looks very comfy.

I found some yarn to use for that in my stash. It’s one of my favorite yarns ever, Debbie Bliss Rialto DK and I got it from Webs — “the more you buy the more you save!” (it’s hard not to fall into that trap) :

And TO ADD TO ALL OF THAT.… I found this cute pattern book which has some really cool things that I know some doodlebug friends of mine might like me to make them for Christmas:

Speaking of Harry Potter, the doodlebugs lent me #5 and it is so thick that I had to put my book light in the middle of the book so there wouldn’t be a shadow on the page when I was reading the first part of the book!:

Suffice it to say, I’ve definitely got full-on STARTITIS. Send tea and pastries to keep my stamina up, please! LOL

Actually, instead I’ll make toast with this bread I made today:

This is a great stand-by no-knead-cook-it-in-a-pot recipe that I found several years ago on the Attic24 crochet blog. (click there for a link to the post). And this is starting another starting thing – holiday baking. I found a pumpkin scone recipe and I’m dying to make some pecan pie bars. I really need more than 24 hours in each day.

I can’t let a post go by without an update on Moose and Smudge. Moose had his (literal) first taste of snow:

He liked it. It was just a dusting – he didn’t even notice it on the grass.

And he had no clue that Smudge was VERY close by the other night:

And here Moose is, just being cute: