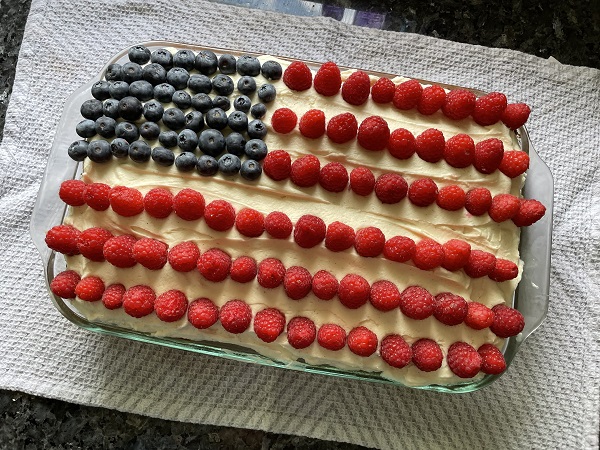 Busy weekend over here! Here is the rundown:

I Made a Cake

It was wonderful and got good review by our guests. One nine-almost-ten-year-old’s comment: “My compliments to the chef.” (insert emoji with heart eyes here – don’t know how to do that on my blog!)

Paul grilled some veggies and I made a balsamic vinaigrette to got with them:

This picture was going to be much more appetizing in my mind. It looks a little blah here. But they were yummy. There is nothing like grilled veggies!

Then I spent many, Many, MANY hours low-and-slow grilling and smoking pork butt and ribs….

It was 58 degrees and raining when I started. By the time we ate, 7 hours later, the weather had improved.

It was my first time smoking meat on the grill and boy is it exhausting. So much adjusting of the temperature of the grill, taking the temperature of the meat, wondering if it’s going to be done in time for when the company arrives and is hungry. (It wasn’t.) The ribs were done in time but the pork butt took two more hours in the oven. Luckily we had back up hot dogs! (Even though when I turned up the temperature on the grill to cook them, I set the grill on fire. All the grease from the other meat….) But I learned a lot about the process and will definitely do it again because… THE RIBS! So. Good.

Bet you are wondering where the picture of the meat on the grill is. Or the picture of the finished meat on the platter/on plates. Well, you would have them if I remembered to take them. I was so tired by the time everything was done, I just forgot. Next time. And I think I’ll dedicate a whole post to the process, including the rub I used.

We also realized we probably need to buy a new grill. We got this one when we lived in Vermont 15 years ago!

I Started My July Knitting Challenge

My Graceful shawl by Cally Monster is off to a very pretty start!

(That gray yarn in the center is a provisional cast on that I will take out later and cinch up the hole.) So far, great pattern, easy to follow and it’s fun to see the flower motif emerging.

Checked in on the Garden

Not too much happening yet. Got a zucchini and a squash coming. The other stuff (beans, eggplant, peppers, heirloom tomatoes, pink celery and pumpkin are coming along nicely. Discovered we have a Japanese beetle issue, so we’ll be dealing with that promptly.

Wished Happy Birthday to This Guy

Smudge turns four today. We didn’t get him a present yet. He’ll be getting one on Wednesday.

How was your holiday? Anything exciting, like setting a grill on fire, happen for you?

2 thoughts on “Fourth of July Wrap-up”