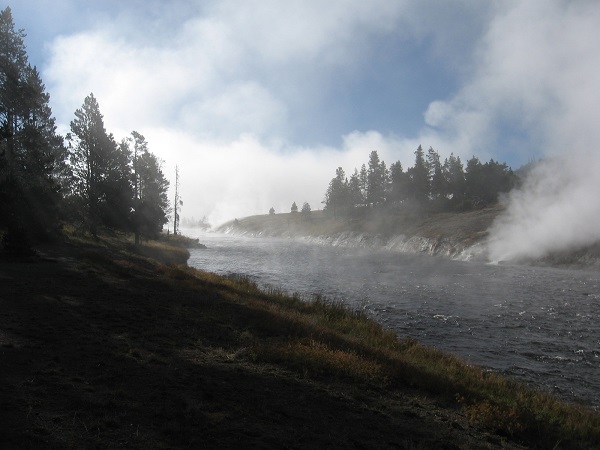 Welcome to the third and final installment about our Yellowstone vacation.  Hopefully you are still interested.  We had a terrific time and while WE were terribly excited about it and thought it was the bees knees, not everyone on the internets wants to see the 4,000 pictures we took.  Maybe I’ll put some more knitting in there, this time.  I’m sure that will draw in ALL the readers.

Let’s see, what’s left to tell you?  Oh, some beautiful waterfall pictures from the Grand Canyon of Yellowstone (really, that’s what it’s called): 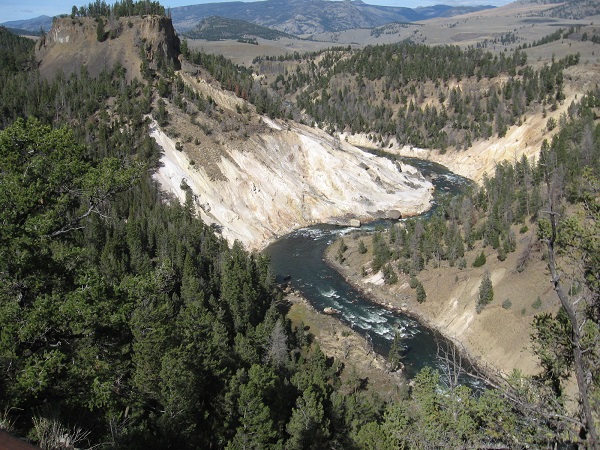 And us, trying to get a picture with it in the background but we were both too scared to stand close, with our backs to it, so we just got this: 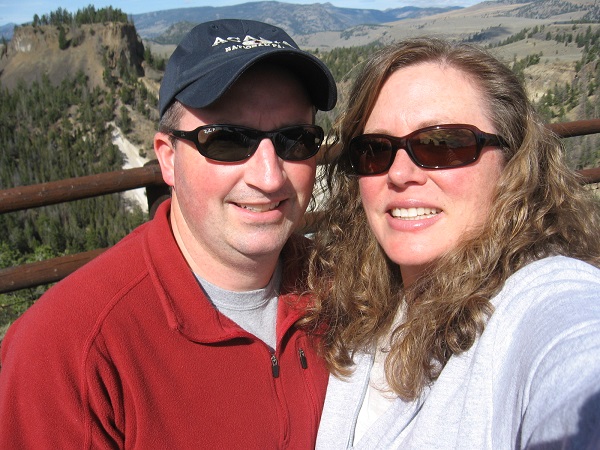 And this pretty waterfall: 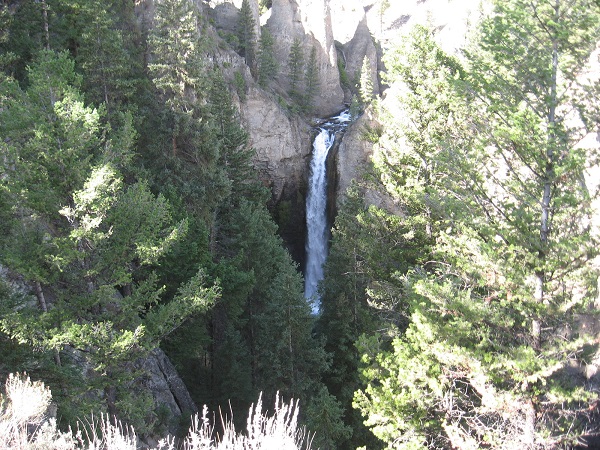 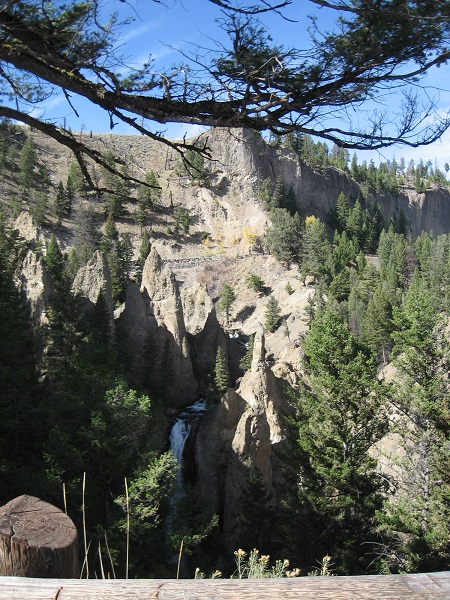 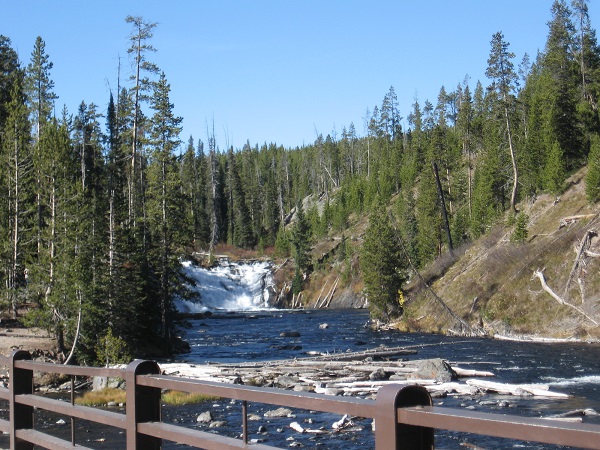 It’s hard to see in this picture, but standing on the edge of that cliff are two big-horned sheep: 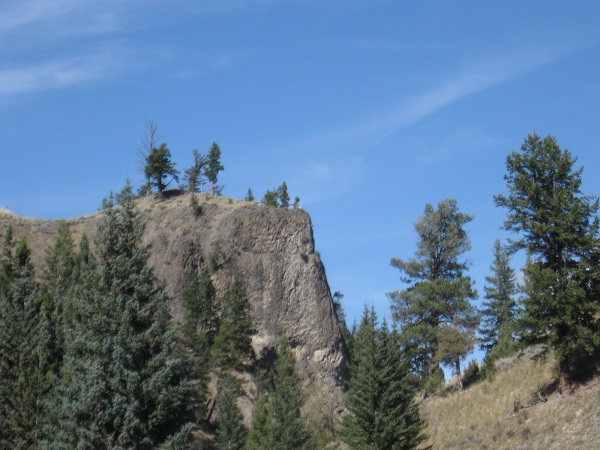 (we saw them with our binoculars)

Also, another spring, the Grand Prismatic hot spring, which dumps many gallons of water a day into this river, making it steamy: 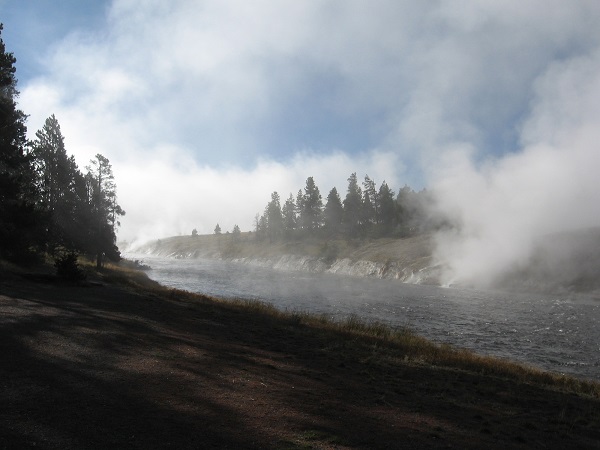 The other part of the river, where the spring is not running into it: 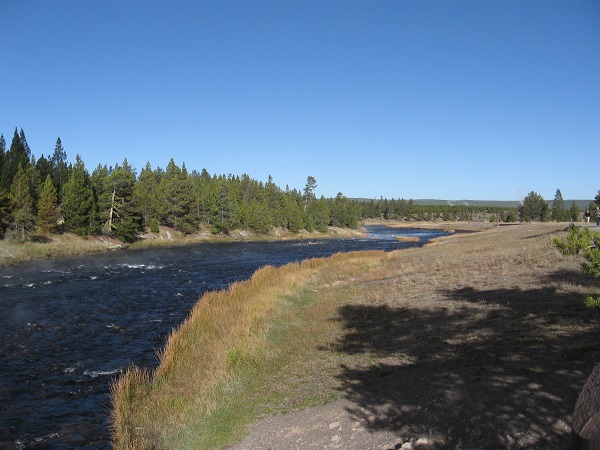 And the spring itself: 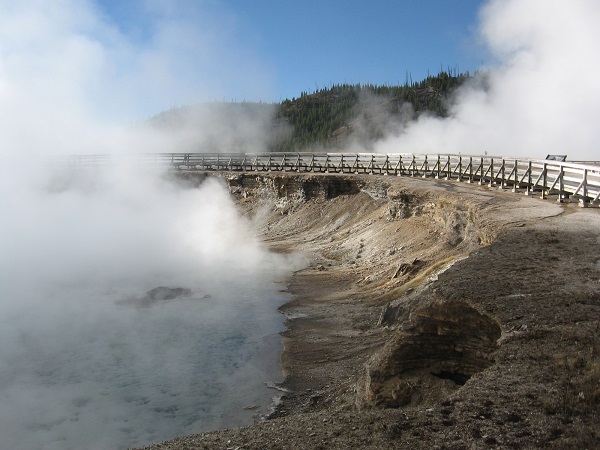 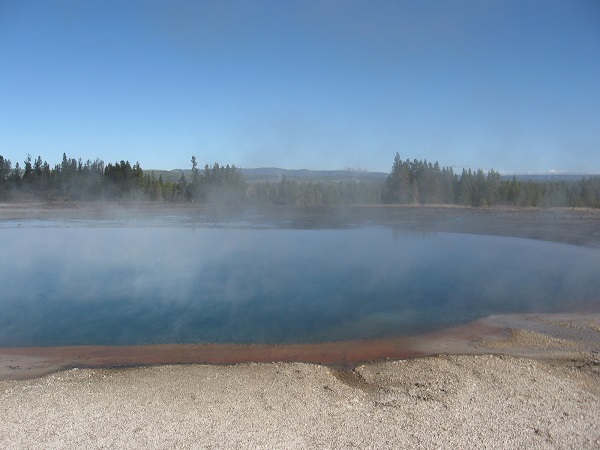 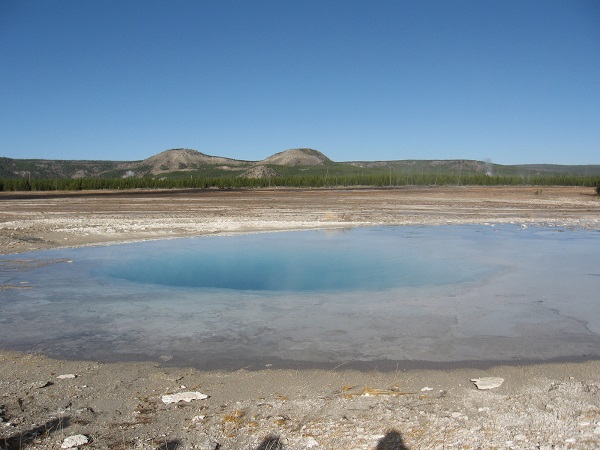 See that dark spot in the water?  That’s a big hole, going down into the earth.

While so terribly excited to go to Yellowstone, when researching it and seeing some of the pictures of the sulfur springs and geysers (with burbling mud and dead trees around them) I sort of thought, “Is this going to be pretty?  Looks pretty icky and ugly.  I hope we see pretty things too.”  And as you have seen, we did.  I came to look at the ugly, stinky things (those sulfur springs smell AWFUL) as pretty, especially seeing them in contrast to the other landscape and knowing how they formed and why they are there.  Did you know that underneath Yellowstone there is a HUGE VOLCANO??????  That’s where all these hot springs and geysers come from.

So, finally our vacation had to come to an end.  We were actually ready, because we were exhausted.  So much oohing and aahing really can take a toll on you!  So we headed back out of Yellowstone after crossing: 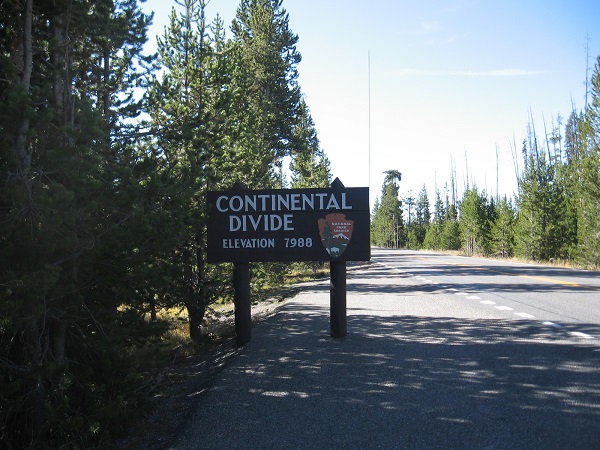 and going out the: 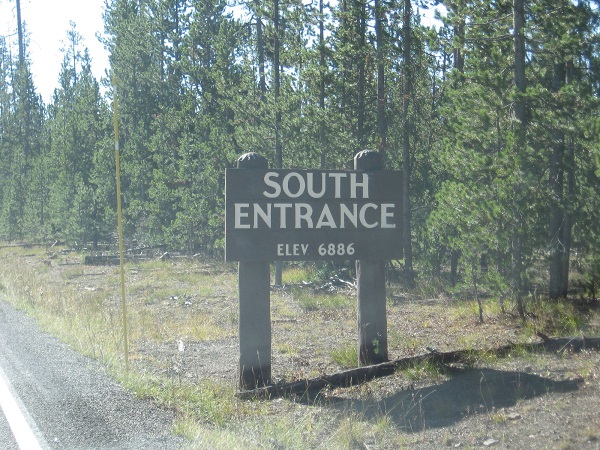 We said goodbye to: 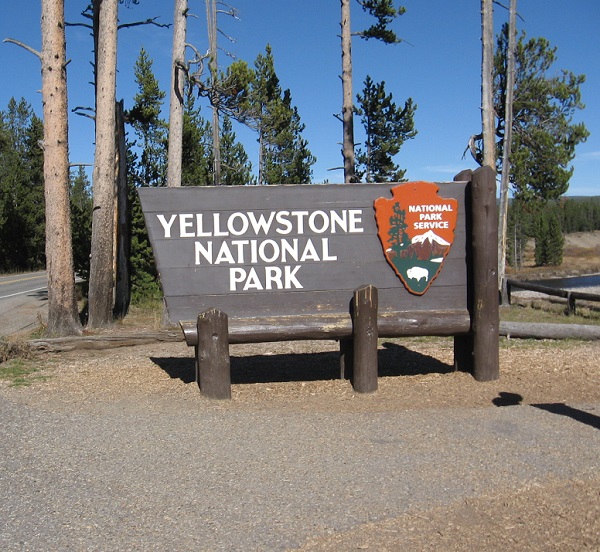 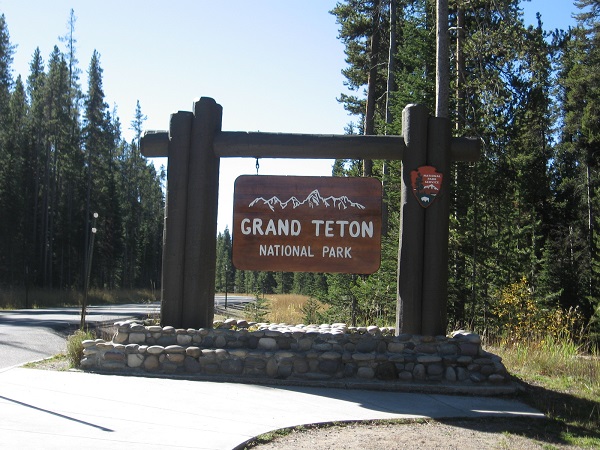 And back to Jackson Hole for the night before our trip back to the Salt Lake to get our flight home. We had an excellent Mexican dinner: 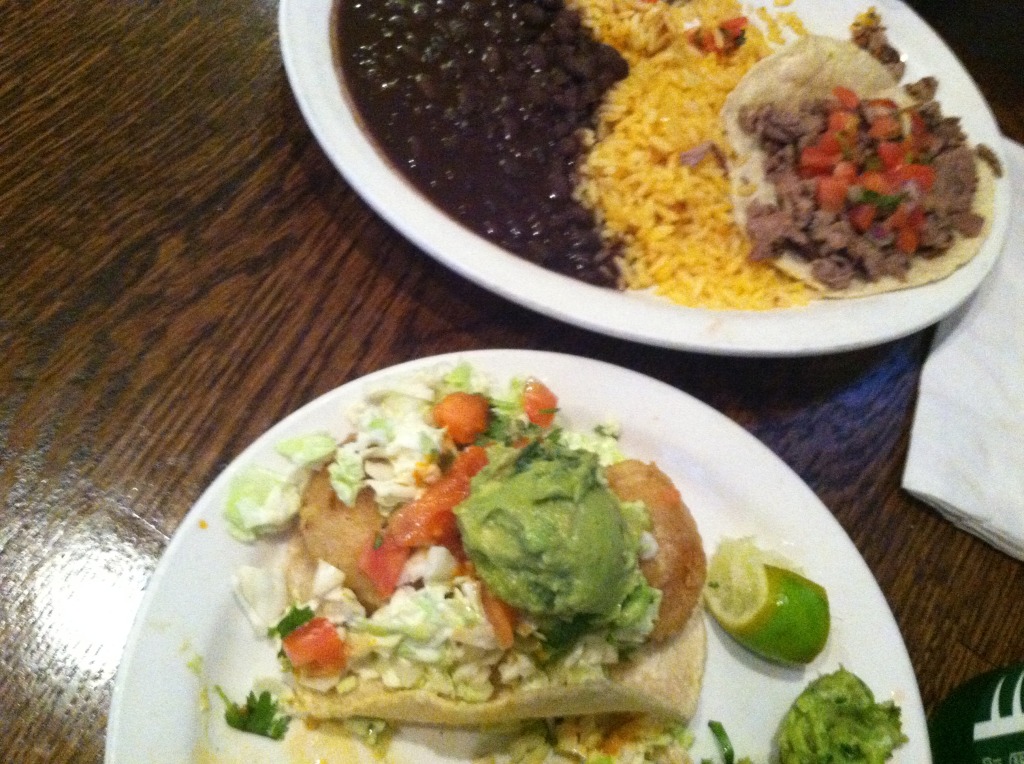 And went back to The Bunnery for dessert and breakfast the next day: 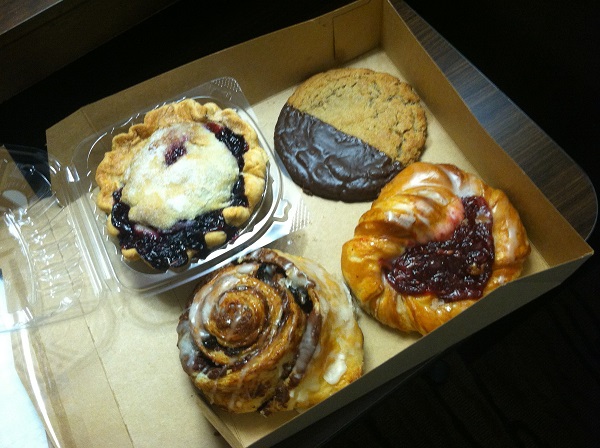 Looooooong drive back to Salt Lake City where we got on two more planes and I did this: 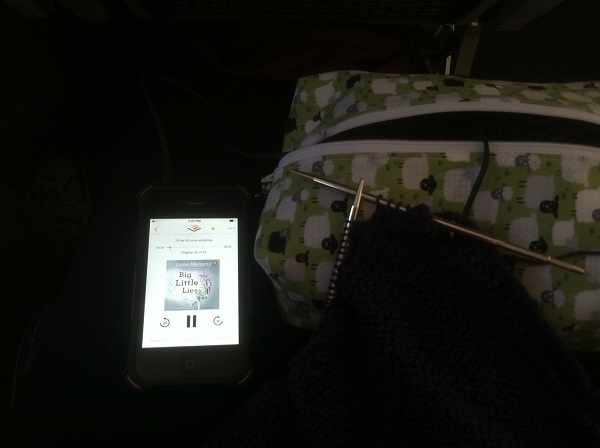 And here is Chicago: 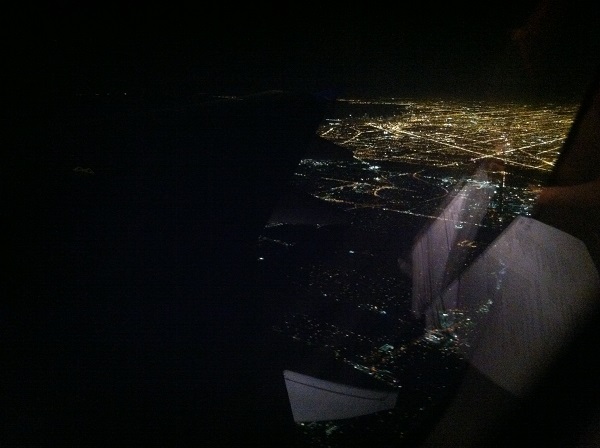 Also, some random things that didn’t seem to fit anywhere else in these posts…. 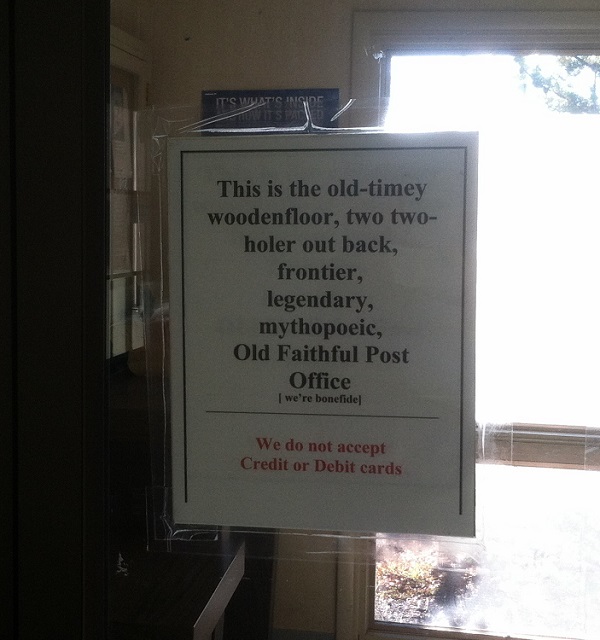 And one of the many ecologically friendly bathrooms scattered around the park: 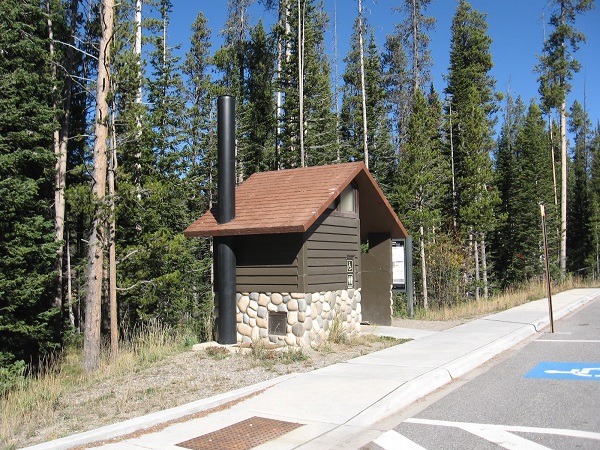 Some other random things and gripe-y things to tell you:

1) The Chicago airport, thankfully, was pretty much up and running by the time we flew through there.  There had been a fire in one of the control buildings a week before and things were a MESS.

2) We don’t do much air travel so the annoyances of other travelers was really striking.  The audacity of one passenger to take someone else’s smaller belongings out of the overhead so hers would fit and then try and cram the smaller belonging into another overhead, not listening to the other passenger’s protestations.  And then the man behind us while we were sitting waiting to board at the gate snoring and snuffling really loudly.

3) We went to Yellowstone in October because we did not want to be amongst huge crowds of tourists.  This mostly worked.  There were not a ton of other people there.  Still…. several tour busses came each day and the rush of people coming off the bus and running to the restaurant to get a seat was amazing.  We happened to be in the restaurant eating lunch one day.  It was a little fast food-type place where we could get something quick before our next venture into the park.  The bus passengers crowded into the restaurant, ran for seats, and when they were all full, they stood near tables where others were eating, waiting for them to be done so they could quickly sit in those seats when they got up.  It was awful and annoying.  We even tried to eat lunch early one day to miss the rush.  It didn’t work.

4) AND, sometimes those busses arrived at the sights we were seeing.  I was patiently waiting to take a picture of one of those waterfalls up there, because another photographer was in the best spot.  Then a bus arrived and several women pushed in ahead of me to get their picture.  It ruined a nice quiet moment of looking at the waterfall for one thing.  I patiently waited for them to leave before I got my picture.  Again, awful and annoying.

5) AND, there were many signs around the park stating things like “Danger: do not walk past this sign” — the ground around the geysers is very fragile because of the heat and you could break through and fall if you walk on it.  People were walking where they were told not to.  And there were also signs near the springs, where the algae was growing in pretty colors that said “Do not disturb the algae” — people wrote their names in it.  And there were also signs that said “Do not throw objects into the springs” because they get all plugged up and stop working.  People threw things in anyway. They have to clear out hundreds of objects every year.  why, Why, WHY do people do that??????  The parks are there for nature to be protected and people just ruin it anyway for their own enjoyment!

Ok, enough of my ranting.  Despite my gripes, we still had a great time, seeing so many things we have never seen and enjoying our time together.  We are already deciding what park to go to next.

I finished my High Plains poncho!  But, you don’t get to see it yet.  Sorry.  Next post will be about our trip to the NYS Sheep and Wool Festival in Rhinebeck, where I am planning to wear it and get some pictures.

I started my Duane Park Triangle on our trip, and have continued working on it: 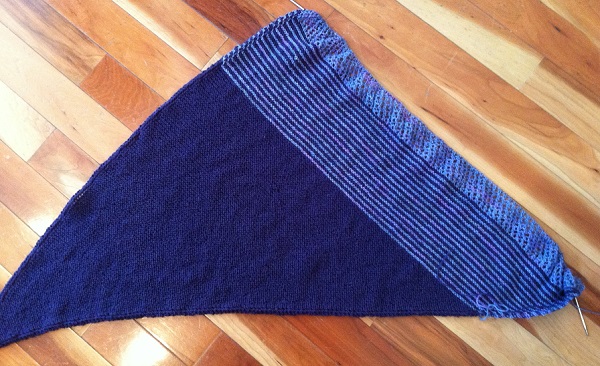 These colors are more accurate: 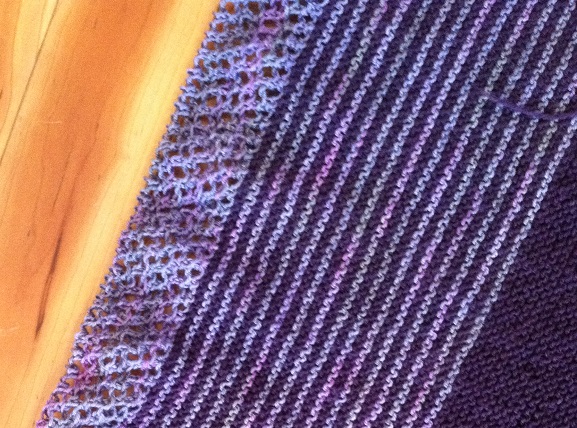 A few more rows of that hole-y looking part and then an applied border.  I’ll tell you about that another time – it takes forever, but will look nice!

Back to “regular” blogging next time!