Let me preface this blog post, after that intriguing title, to say that by “adventures” I mean “what usually happens around here”.  The first adventure was the large amount of yard work  Paul and I did together.  We had to move several piles of dirt and reeds that had been taken out of the pond: 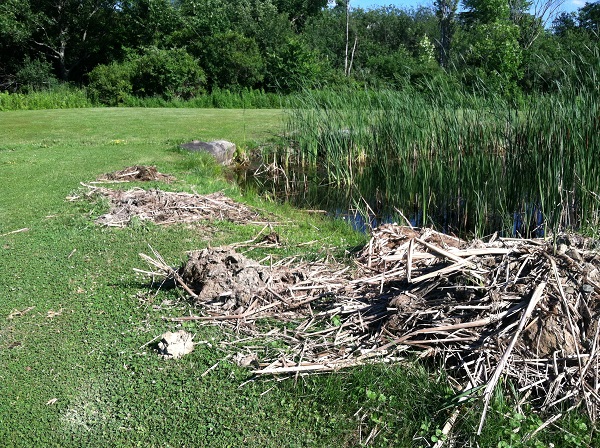 (there were many more than this picture would indicate) and put them in the woods: 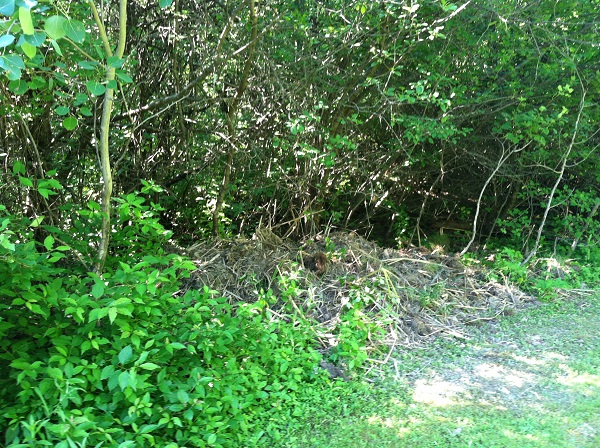 My favorite kind of yard work: The hard, boring kind.  Luckily it was a beautiful, not-hot day.

Then there was lots of weeding and tidying up of the beds in front of the house.  As I was trimming back the huge mound of flopped over daffodil stems, there was a sudden flurry of activity that scared the bejeezus out of me.   At first I thought there were rats coming out of it.  But then I realized they were three baby bunnies.  UGH!  I had totally messed up and disturbed their nest.  No more cover or protection since I had chopped it all away.  They ran for additional cover around the corner, under some lilies, next to the house/chimney. 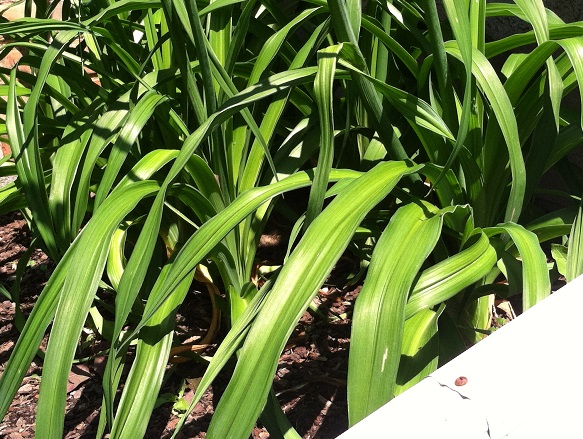 Smack in the middle of this picture, you can just make out a little bit of fur.  I felt terrible!  They stayed there for some time.  I checked on them later and they were still there, then in the morning they were gone so I assumed their mom came to get them.  When I looked online, I was relieved to see that at the size they were, they can likely survive on their own anyway, and that the mom stays away during the day to lure predators away from the nest.  She likely came back around dusk and found them.  I hope.

Our other adventure was our yearly trip to the Washington Park Playhouse to see an outdoor musical.  This year there are two productions and this month it was “Hands on a Hardbody”.  It was about the lives of the various people taking part in a contest to win a truck by being the last person with their hand on the truck. A musical about this.  We were intrigued. 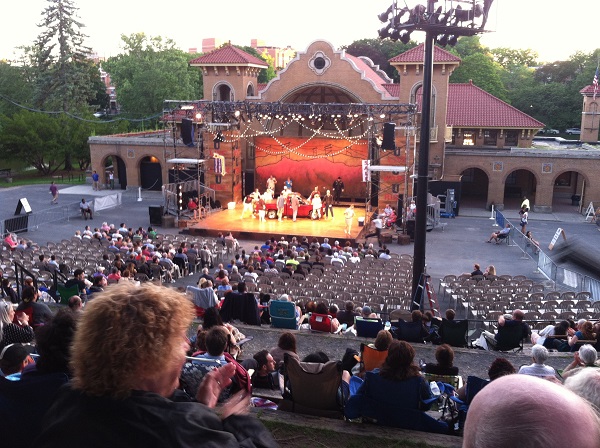 It was a beautiful night to sit outside and I did a little knitting while we waited for the show to start: 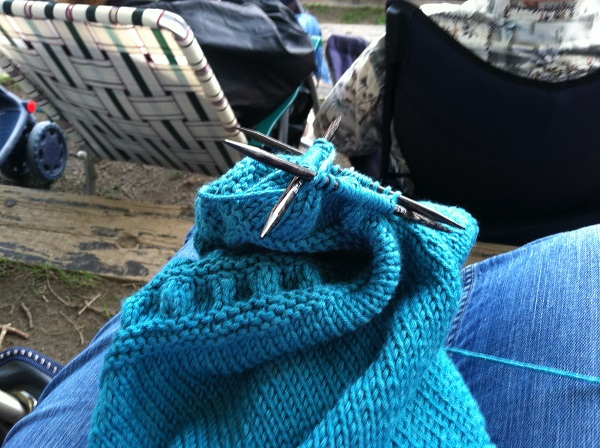 Does this tell you how exciting the show was?: 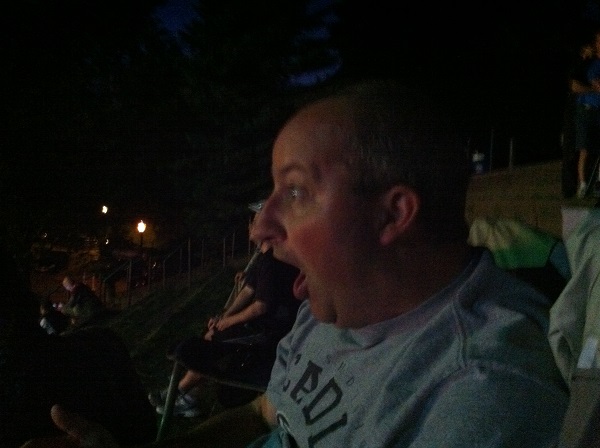 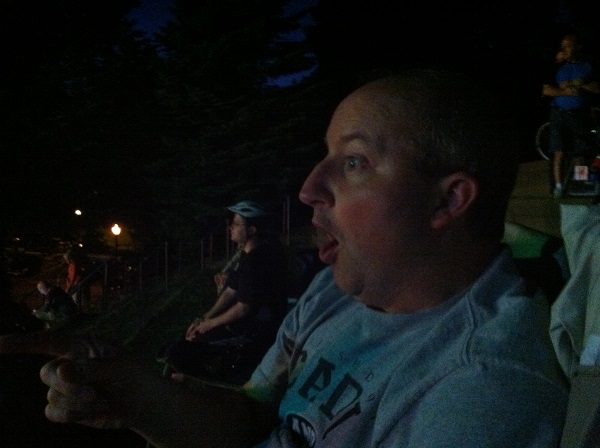 Not really.  [This was Paul joking around at intermission about how “exciting” it was. Pretty convincing.] That first picture of the stage is pretty much what we saw the whole evening, except sometimes during a song, the car would turn and people would sing/stand on it.  Entertaining enough, but not one of our favorites.  We really enjoy the Park Playhouse and go every year, but I guess we can’t love them all.  We are hoping to enjoy the August production of “Oliver!” a little more.

Paul also worked on “my” car, which is not normally terribly remarkable, but I walked outside and saw this and it was just kind of funny: 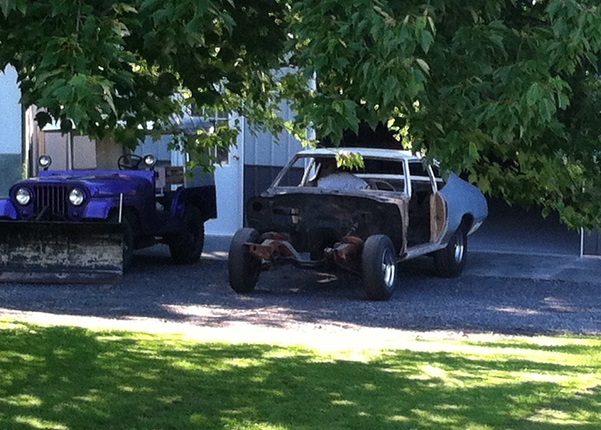 That’s him in the car, apparently doing some sort of loud, grinding of spot welds on the floor.  I think.

And finally, in preparation for lunches this week, I tried a new salad recipe:  Quinoa with Tomato Basil and Mozzarella 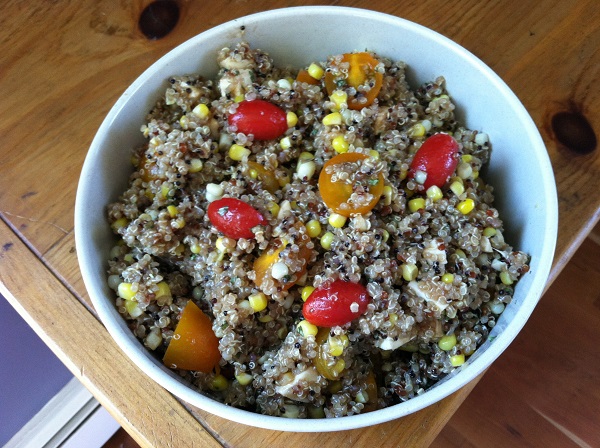 It doesn’t look terribly appetizing (I had to arrange the red tomatoes to give this picture some color) but it is really tasty!  I used my cherry balsamic vinegar in the dressing, and I added some fresh corn.  A great, cold salad for hot summer days!  Plus, it’s from the Pioneer Woman and I pretty much love everything she does.  I love her cooking show.  I love her ranch.  I love her blog.   She’s up there with Martha and Ina in my book.

I’ve got a busy week ahead.  Stay tuned for knitting, spinning, doodlebug adventures and who knows what else?