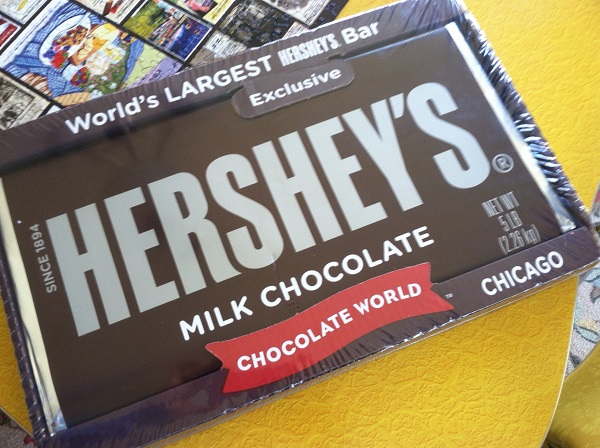 …..That’s the sound I’ve been making all week because of a crappy cold that knocked me over.  Which I developed on the way home from our very busy yearly trip to Virginia, after a crazy week leading up to that weekend.  So, here’s what you missed:

Before going to Virginia, it FINALLY got nice outside and it was all about chalk: 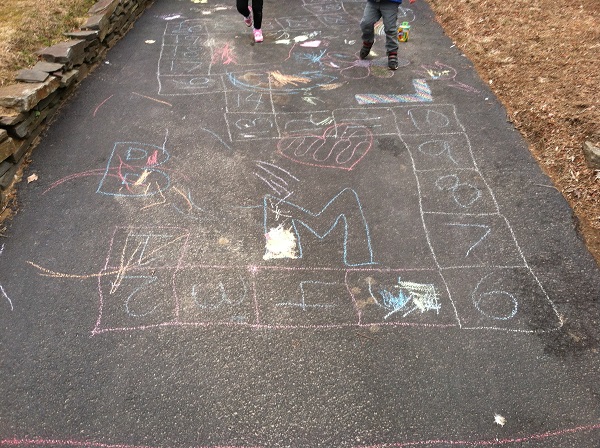 And measuring the bean plant that finally started growing.  In the time I was there one day (9 hours) it grew one inch: 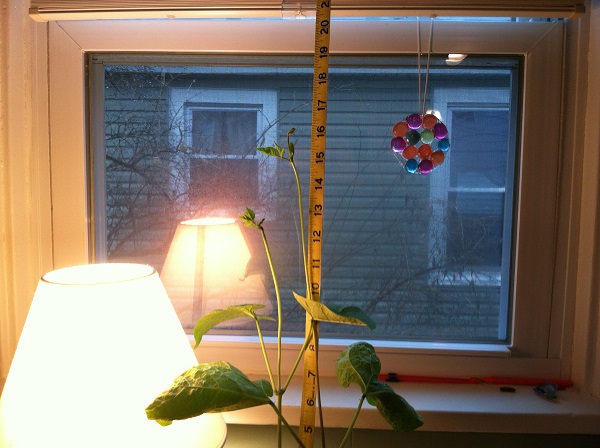 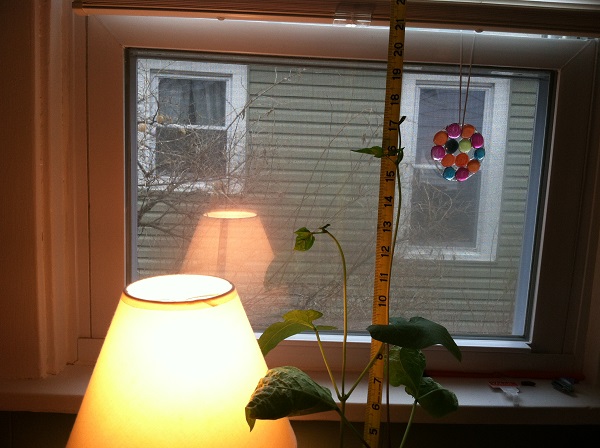 And currently it is about thirty inches.  Some days (in 24 hours) it grew four inches! Tons of fun to watch.

Then it was time for Virginia, and the unexpected cancellation of the doodlebug family due to illness.  Boooooo.

On the way, we stopped at Hershey’s Chocolate World: 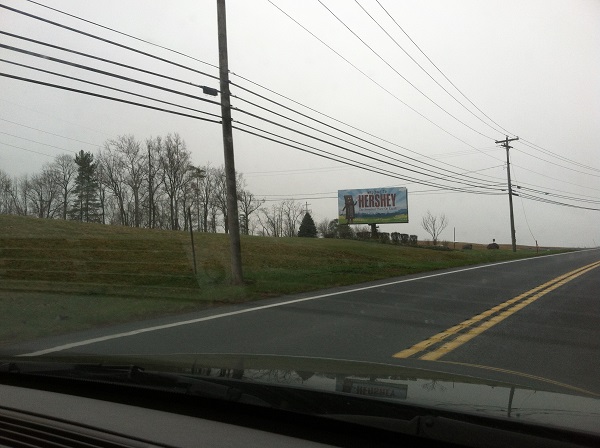 Where we of course purchased the five pound bar again (among other things):

And made a stop for ice cream: 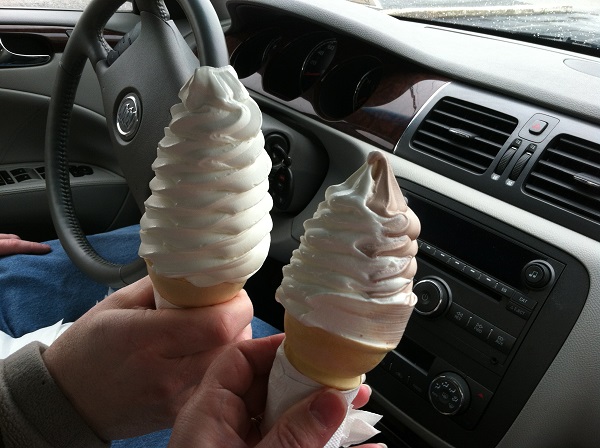 Once we got to Virginia, fun was had by visiting the National Arboretum (or Arbortreeum as we like to call it) to see cherry blossoms (of which I took no pictures) and the bonsai museum (of which I took a ridiculous amount of pictures): 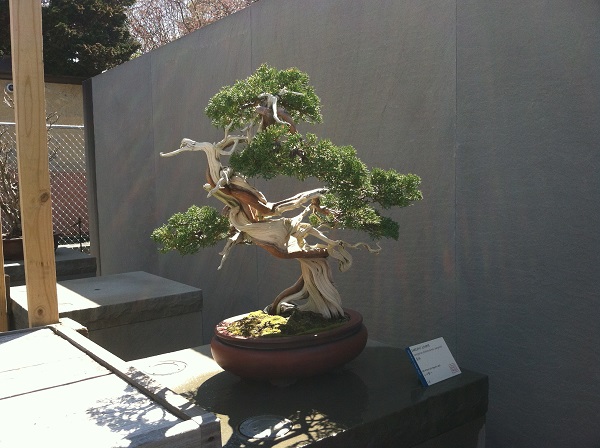 And also at the arbortreeum, there were these: 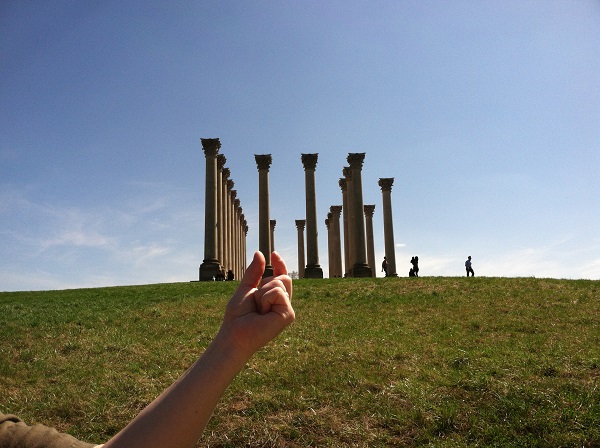 The original columns from the capital building which were replaced when they did a renovation.  I’m glad they kept them.

There was also a walk with Jake: 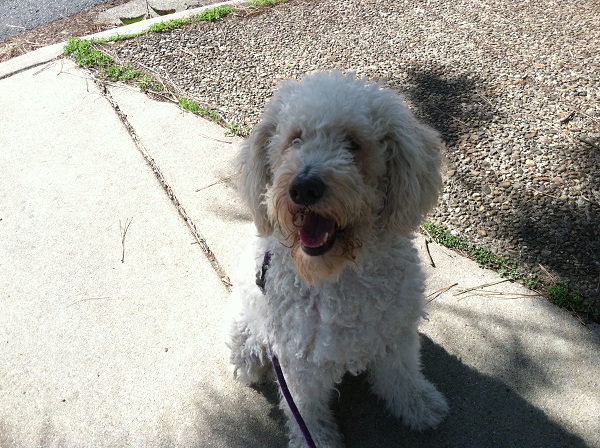 A trip into Old Town to get fig balsamic vinegar and onion bourbon jam from Olio: 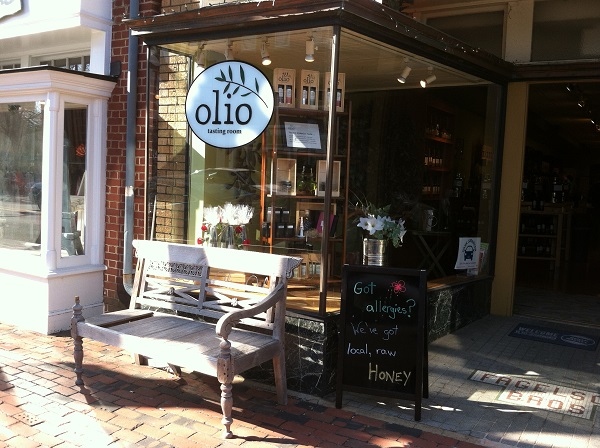 And guess what was right next door that we didn’t even set foot in because my sister-in-law Anita and I had placed ourselves on a no-yarn-buying thing because we have so. much. yarn. ?: 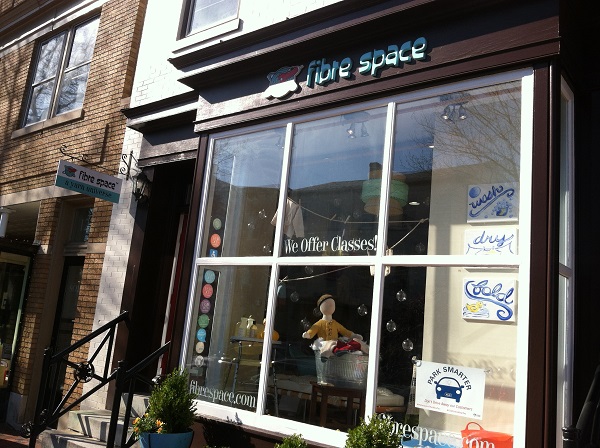 I may have felt a tiny bit of regret at that decision.

Then there was the usual game-playing.  A new game called Cubb: 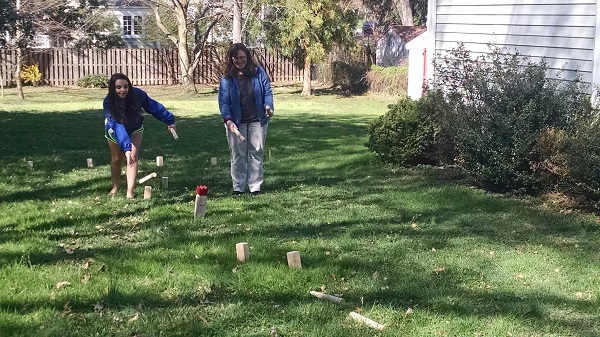 A game we have never heard of, but was fun, and which apparently has a National Championship-type thing going.

And Yahtzee! and Uno, after which there was a house building thing: 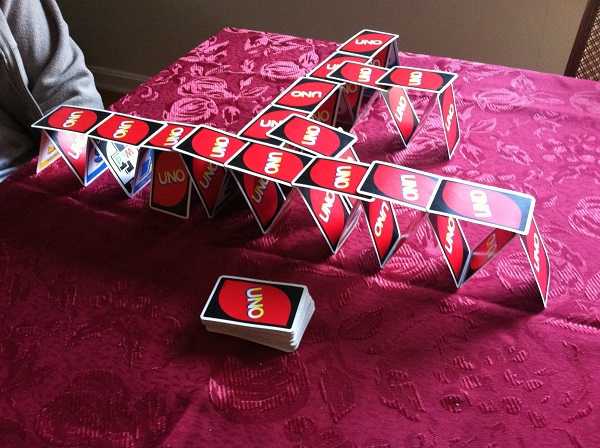 And I got to take home my yearly supply of tomato plants, grown from seed by Anita: 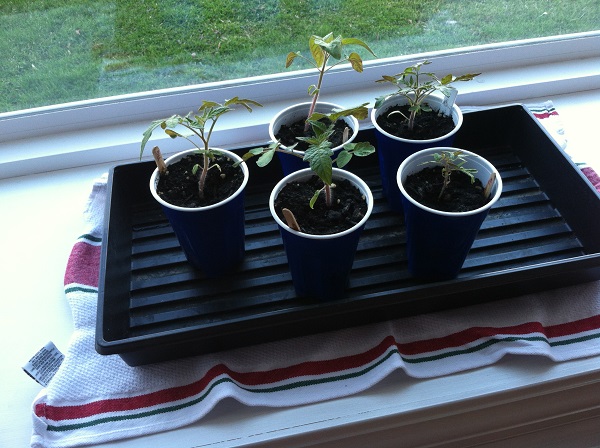 And we came home to my wonderful head cold (see aforementioned reason for the doodlebug family to not go), as well as beautiful weather leading to these wonderful sights: 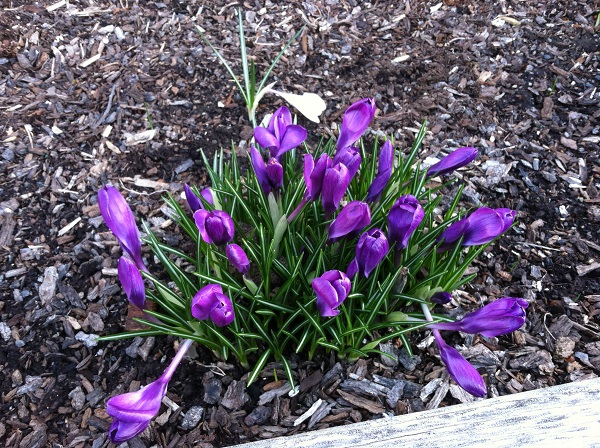 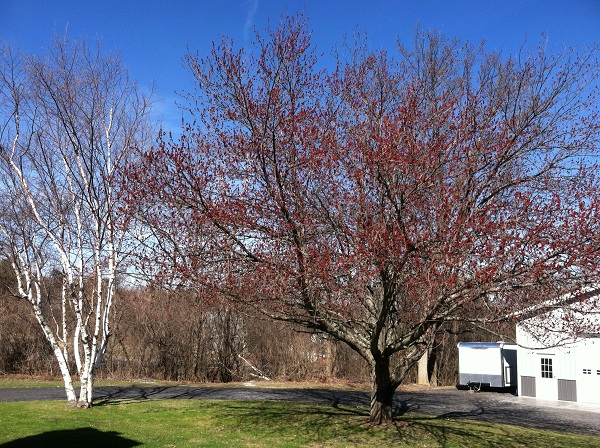 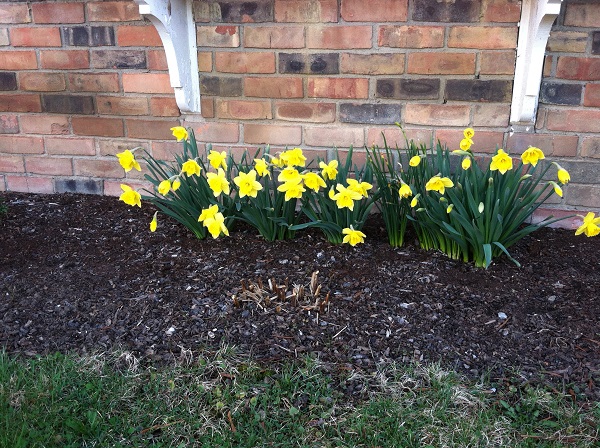 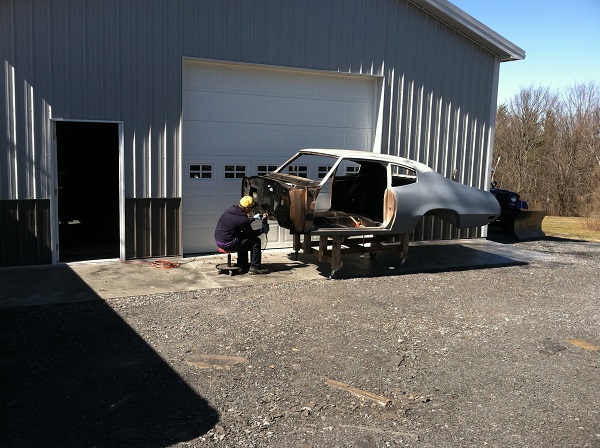 Well.  Let me tell you this:  the week leading up to Virginia was just jammed with deciding what projects to bring with me. I spent an inordinate amount of time on this decision, which I didn’t really have because I had to teach a knitting class and make cookies. But I was intent on starting something new and exciting. After all, this was a special occasion, only happening once a year.  I finally decided on the Halona Shawl. The decision for what yarn to use was a ridiculously long process.  I was trying to use yarn from my stash, of which I have plenty (see aforementioned no yarn buying thing).  SO MANY skeins of fingering weight yarn, 3 different colors of which were needed for this shawl. Three colors that went well together.  I hemmed and hawed about it.  Showed Paul 80 different 3-color options.  Even texted him some color combos, which I brought to the yarn shop in case I needed to supplement with a color that I didn’t have, even though I was not supposed to buy any: 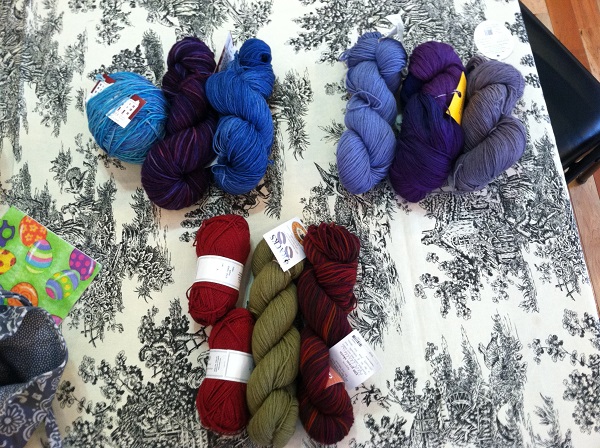 Either the combos just didn’t seem right or they didn’t thrill me, leading me to declare that I just didn’t have enough yarn.  I didn’t go with any of those combinations.  I did go with the green on the bottom though and got quite a bit knit on the way to Virginia: 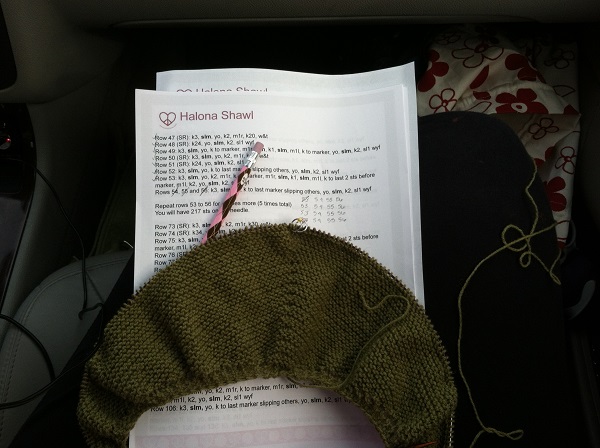 By the end of the trip I was here:

I love it.  And, yes, all yarn from my stash!  Still have a ways to go, but now that the germ fest is basically over, I’ll stop the Candy Crush Soda/Bubble Witch marathon and get back to knitting.