We celebrated my dad’s birthday last weekend and since he is not a big sweets eater, but will tolerate apple pie, I made him an apple pie.  After all, when you celebrate someone’s birthday who doesn’t like sweets, how can you NOT have sweets for all the people who do like sweets?

I actually do not really like pie because I do not like crust.  I think it is blah-tasting.  I do like the insides of most pies, though, so not all is lost when pie is the only sweets option.  But, because of this, I have not made many pies in my life (as of this moment, I have made two).  And somehow, I sort of always forget that Paul really, really likes pie and I always make something else when I’m baking.  To be fair, he really, really likes a lot of other sweets too.  But still.  I forget.

I made a pie one other time, a long time ago.  It was an epic fail.  A peach pie that ended up terribly soggy and not even the inside of the pie was tasty and I don’t know why.  Maybe it was the canned, mushy peaches that I didn’t slice up.  So, when making this pie for my dad, I was going completely on knowledge I have gleaned from the Food Network and reading cook books and cooking magazines.

And of course, there were some problems, specifically with the crust.  I put everything in the food processor as directed and then poured some water in to make it come together.  You are supposed to put only enough water to make the dough hold together when you squeeze a little bit in your fingers.  I did that.  Then I put it on the plastic wrap to put in the fridge for a while and had trouble wrapping it up because it was so crumbly.  I thought maybe the little nap in the fridge would make things absorb.  Nope.  I went to roll it out and it just fell apart.  So, I popped it into a mixing bowl, added some water, worked it in with my hands and then rolled it out.   I also had trouble making the top crust the right size and it was a little lopsided, with one crust edge being much thicker that the other parts. But you know what?

IT WAS A TOTAL SUCCESS! 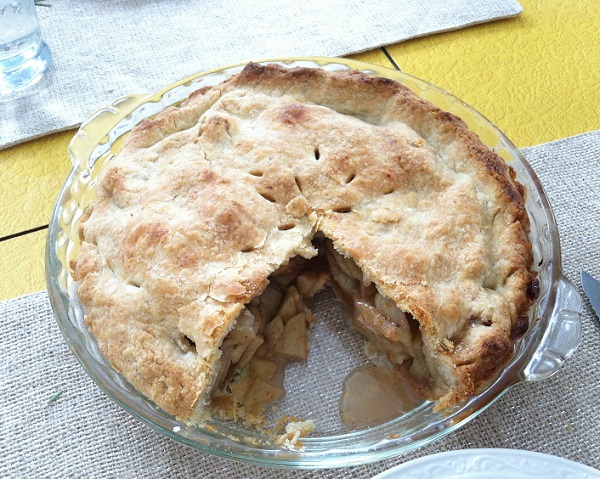 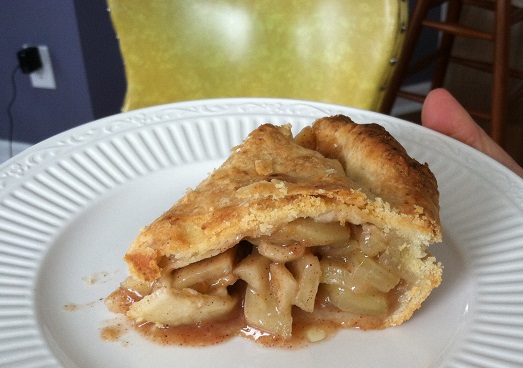 Would you just look at that? Isn’t it the best looking piece of pie you have ever seen? No dome-ing crust with too-shrunk apples.  Not too much juice to make the crust soggy.  The crust was flakey – including the bottom.  My dad said how much he liked it and that the apples were a tiny bit crisp and not mushy.  And…. even I liked it.  I still didn’t love the edge crust because that’s just how it is. (But I can tell you I loved it a lot the next day when I poured caramel sauce all over it.)

I used Martha Stewart’s Basic Pie Dough recipe with one change:  I used 1/2 cup butter and 1/2 cup shortening (instead of one cup of butter) since I heard/read somewhere that it helps make the crust flakier.  Then I used the Good Housekeeping Cookbook (my trusty stand-by for a lot of recipes) for the pie filling.  Apples, flour, cinnamon, nutmeg, lemon juice.

Obviously, I’m quite proud of myself and the next time it will be even better.  If that’s possible.  Ha ha.

The second thing I baked was Kit Kat Cream Cheese Brownies from the Bakerella blog.  I don’t know what it was, but they intrigued me.  Probably because I love Kit Kats.

Brownie batter on the bottom: 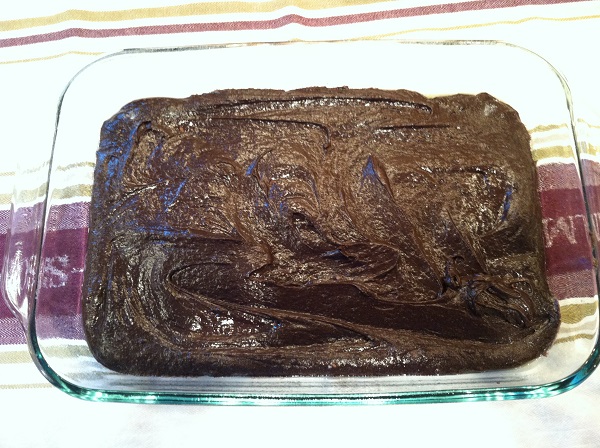 (I used Hershey’s Special Dark cocoa powder instead of the regular.) 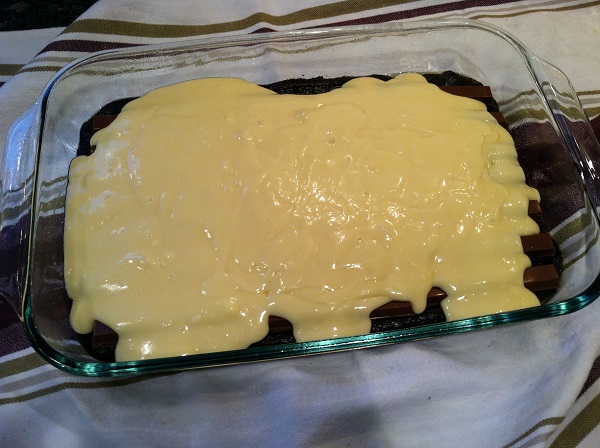 Spread it out, then bake, then cool, then chill in the fridge, then cut into pieces and send them with Paul to the Buick club Spring Meeting since I couldn’t go because I caught a crappy cold: 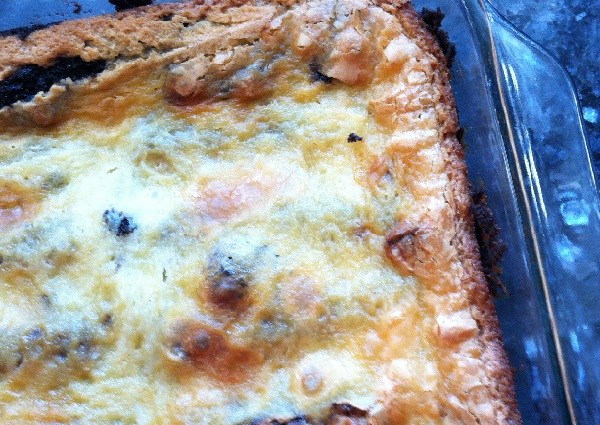 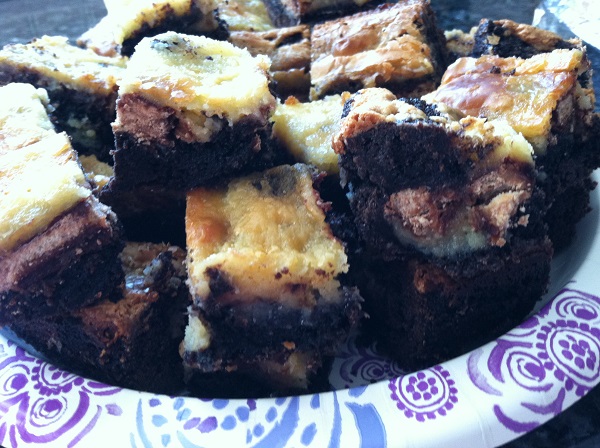 They were very rich and very sweet but quite tasty and I’m told they disappeared quickly!