Wow, this Trellis Ponytail Hat / Messy Bun Hat was a quick knit! (find the pattern here) Even for me, since I’m trying to knit slowly.  It is one of those addicting patterns where, as you are knitting, you can’t wait to see how the pattern is working and how the trellis pattern emerges.  I teased you in my last post with this picture of my afternoon break as I was working on it: 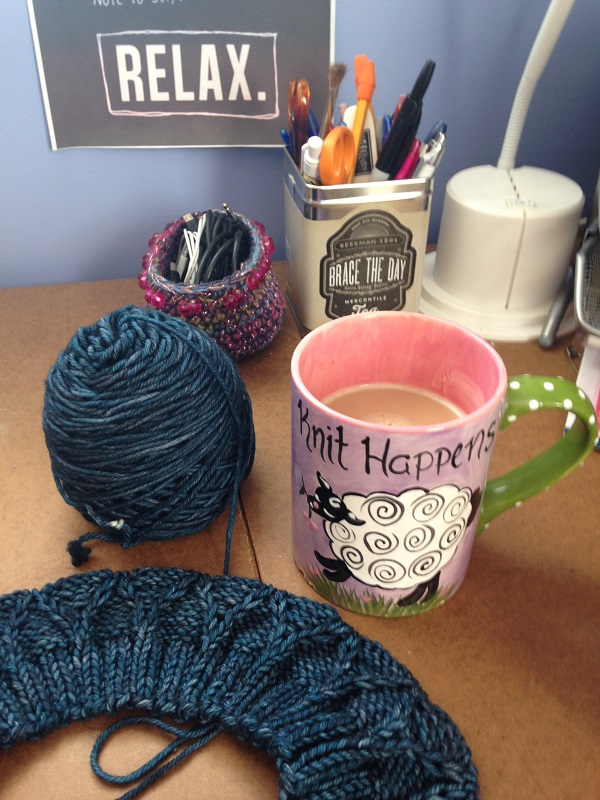 The whole idea behind these hats (of which there are many patterns out there now) is that if you want to wear at nice warm hat, but your ponytail is in the way, you can make your ponytail stick out the back.  You can adjust the button opening based on whether you wear your ponytail up high or down low.  Very practical and you get a cool hat too!

Once I got the technique down, it was done in a flash: 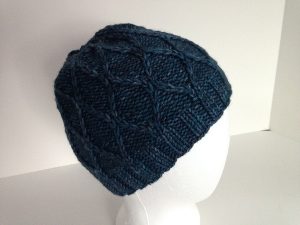 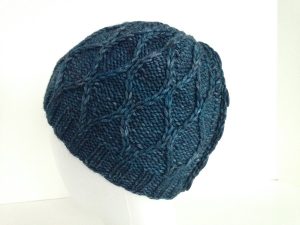 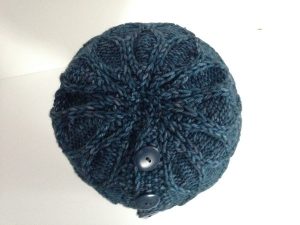 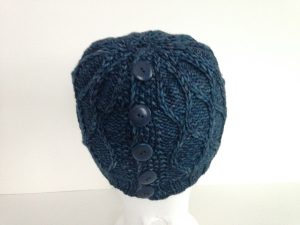 [I just figured out how to do these nifty galleries for pictures, so you don’t have to scroll as much.  You’re welcome.]

If the yarn looks familiar, it is the same Malabrigo Rios I used to make the Misty Blue sweater.  I only needed a little bit of the second skein to finish the sweater and there was more than enough left over to make the hat.  I will say it again:  I. Love. This. Yarn.

This pattern is knit completely flat (not in the round) and uses slipped stitches (and switched stitches) to make the trellis pattern.  For the life of me, when I started, I couldn’t figure out what the heck was happening.  But then the pattern actually started emerging and I figured I was doing it right.

The “switched stitches” involves dropping a stitch off the needle – and letting it hang out there – then slipping another stitch, then putting the dropped stitch back on your needle.  Nerve wracking to say the least, especially in the beginning.  Once you get going, it’s no big deal.  Until you realize your numbers aren’t right and somehow a stitch got dropped not on purpose. [That might have happened to me.]  A cable needle would be helpful if you are just too nervous to do it this way.

Really the biggest feat for me was the five buttons that needed to be put on this hat. FIVE. If you have been reading this blog for any amount of time, you know I really dislike sewing on buttons.  I will put a shawl pin in a cardigan or just leave it open in order to not sew on buttons.  But this hat being what it is, meaning you can’t remotely wear it without the buttons, I needed to do them.

So, the best way of doing this was with a spoonful of sugar – the sugar in this case being the Wednesday night knit-in at The Spinning Room yarn shop, where I could chat away with everyone and work on my buttons at the same time.  And as it happened, I needed to sew buttons on the sweater too (more buttons): 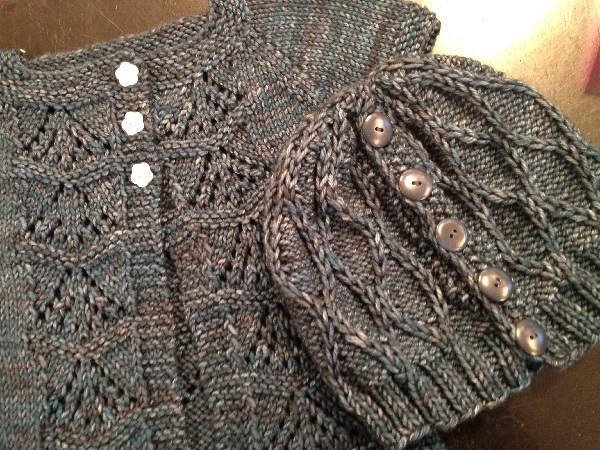 So that was EIGHT buttons I sewed on.  In a row.  If you follow me on Instagram, I posted that picture right after I was done, proclaiming I needed some sort of reward for that!  By the way I recently found this YouTube video for how to sew on a button and it is a much better way than I was doing.

Speaking of Instagram, I’ve been posting things I’ve been doing on my breaks during the day… 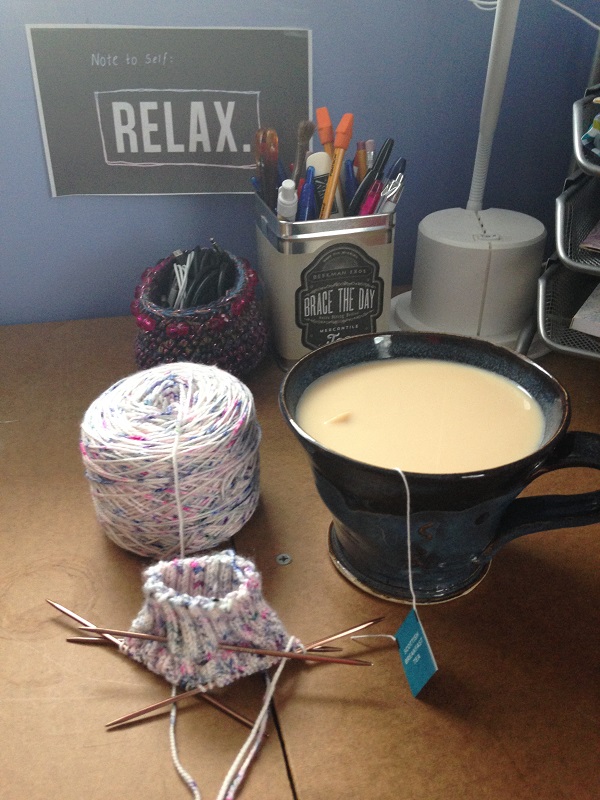 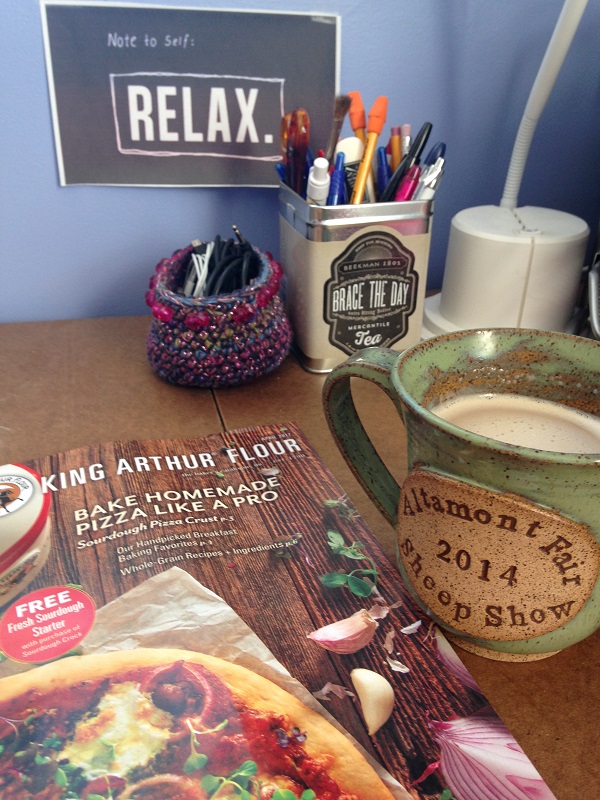 The other day the King Arthur Flour catalog came. My kryptonite. I love almost everything in there and every time I get it I want to bake all the things.

During this morning’s break I worked on my Apple Blossom Socks by Helen Stewart.  I showed those to you in my last post, too.  I couldn’t get them out of my mind, so, since I happened to be at the yarn shop on Wednesday (how fortuitous), I picked up the skein of Happy Feet 100 Splash that I have been looking at forever.  The yarn in the pattern is speckled, but I’m slightly worried that my yarn might be too speckle-y.  Stay tuned.

Another Digression (not at all related):

Take a look at the progress made by the students in my Two Socks on One Circular Needle class that finished up last night: 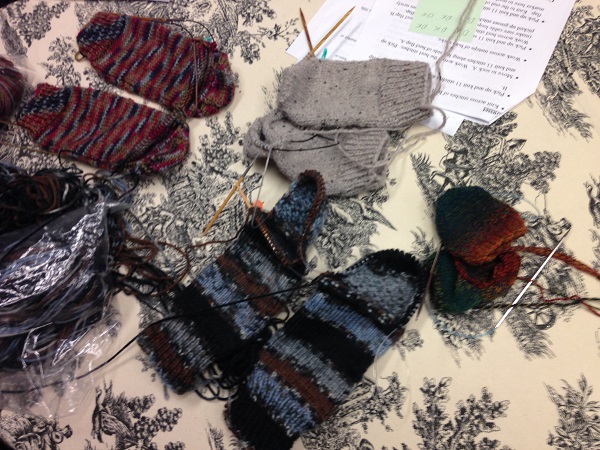 Well on their way to finishing two socks at once!

Back to the Trellis Ponytail Hat:

This ponytail hat was a fun knit and it was great to learn a new technique.  What do you think of the ponytail hat in general – the idea of it?  Do you have someone you would knit it for? [I’ll be offering this one as a class in May/June-ish.]