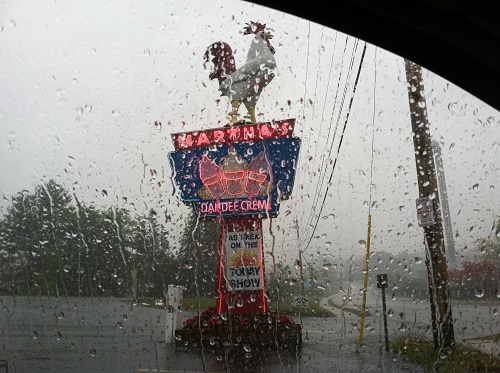 The Good and the Bad

Ugh.  Dreary weather around here this weekend.  We’ve had some ups and downs this week and now the weather is crappy.  The pole building got started, so that was good.  The inspector came and gave the all clear so that was good too. 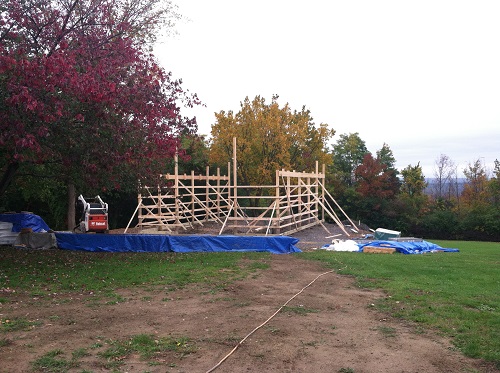 Paul did his own inspection and found the builders had cut the phone and cable wires he and his brother so painstakingly placed during the hottest weather of the summer, so that was bad.  He spent time yesterday and today, in the rain, fixing it, so that was also bad, especially given that his reading up on the subject indicated that splicing an outside wire means it won’t last long anyway.  It’s worth a shot to try.

I was supposed to teach a class for the Cozy Wrap yesterday, but there were not enough sign ups and the class had to be cancelled so that was bad.  But, Paul and I took that found time to bring a whole load of things that didn’t sell at the tag sale to donate at the Salvation Army, so that was good.

Yesterday I made the Pumpkin Spice Cake from the Martha Stewart’s Cakes book: 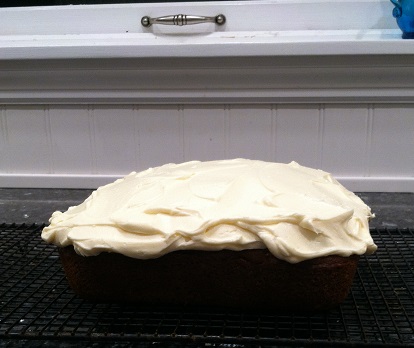 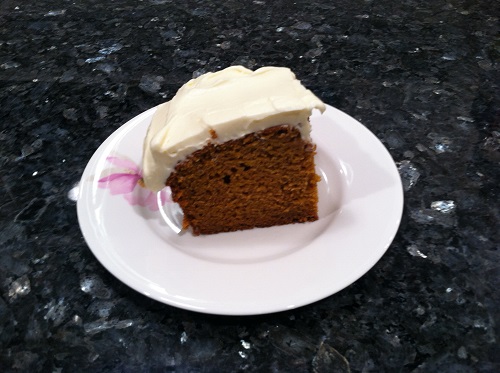 Doesn’t it look just like the picture from the book?: 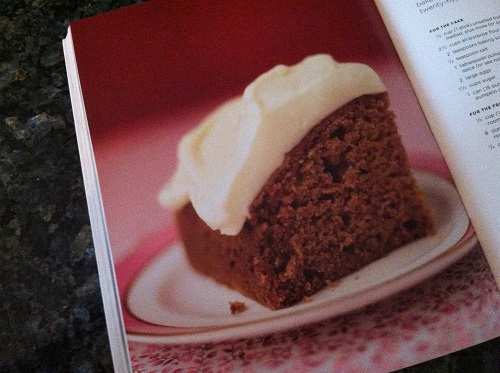 Sort of? …except for the crumb stuck in my frosting.  So it was good that I baked.  But it was bad that it didn’t taste I good as i thought it would.  I’ll still eat it, mind you (it’s not that bad).  I just thought it would be better.  It has a cream cheese/butter/honey frosting that is a little rich.  And also, I had to make it in an 8″ pan instead of a 9″ pan, which meant I had to cook it longer and that made the edges a little overcooked, and it made the frosting to cake ratio off-kilter.  In other words, when you put your fork in the cake, the cake is too high so you can’t fit the whole bite in your mouth.  You have to end up scooching the frosting around and taking two bites out of the one forkful and it’s just a lot of work.  These are the kinds of things I care about in a cake.  I need a 9″ pan.  It might seem as if it would not make a big difference but I really think it did.  Or I needed to turn it in to a layer cake.

Today it was raining like crazy and that was bad since we were bringing Paul’s mom up to Lake George to the Easy Spirit outlet so she could get her favorite sneakers that she can’t find anywhere.  They are buy one, get on 50% off at the outlet and you can’t beat that.  I may have also gotten in on the deal since she wanted three pairs and needed another pair to get the 50% off, so that was good.   I was only doing my part.

We drove to see the lake and it would have been nice if it was a sunny day but: 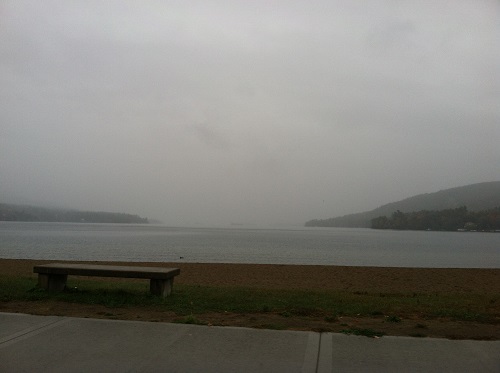 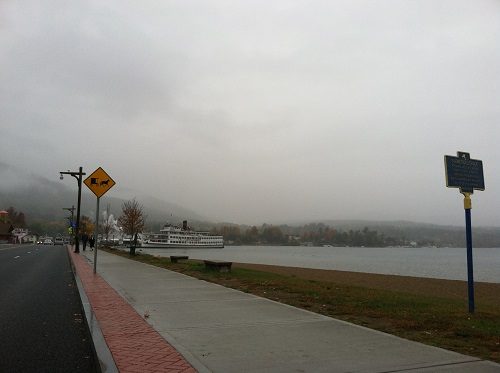 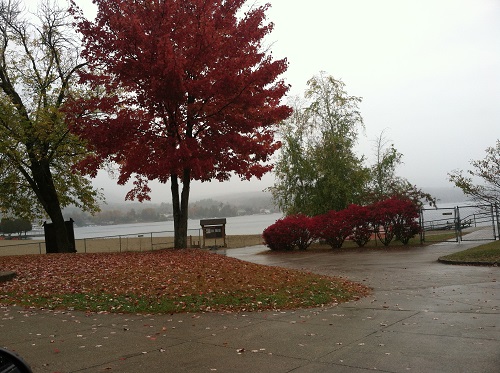 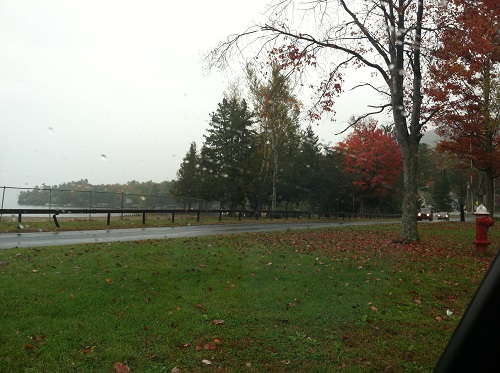 Still pretty, even in the rain.

And of course we had to stop for ice cream:

..which was still tasty, even in the pouring-at-that-point rain.  When can ice cream ever be bad?

The dreary weather, and the drive to Lake George, gave me some inside time to work on my knitting!  So that was good.  I made a lot of progress on the front of the Aaron’s Aran Sweater: 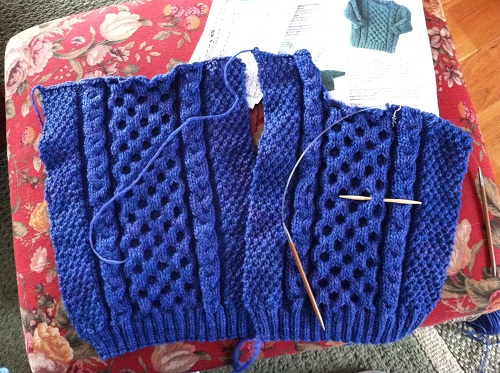 Just one short little left-side section to do and then it’s on to the arms!

And I’m just starting the right armhole section of my Ecuador Sweater: 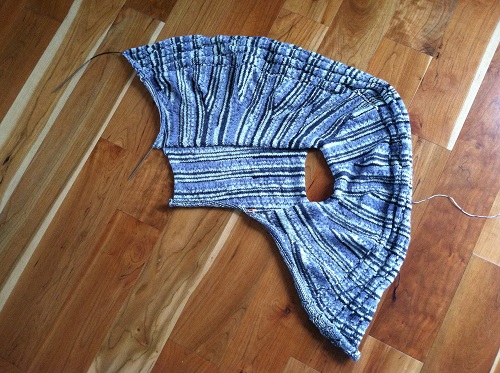 The dreary weather did make for some pretty good leaf peeping pics in our yard: 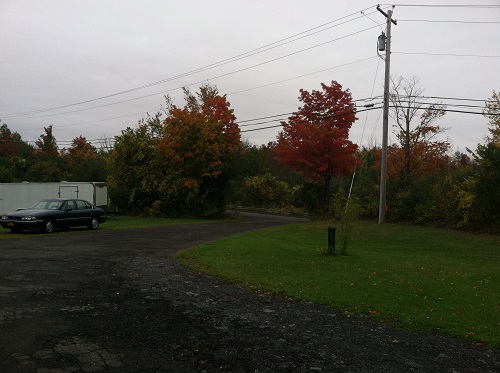 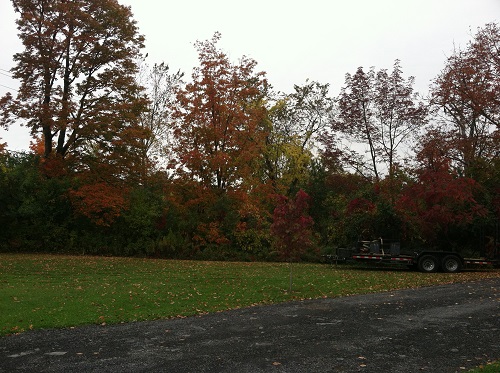 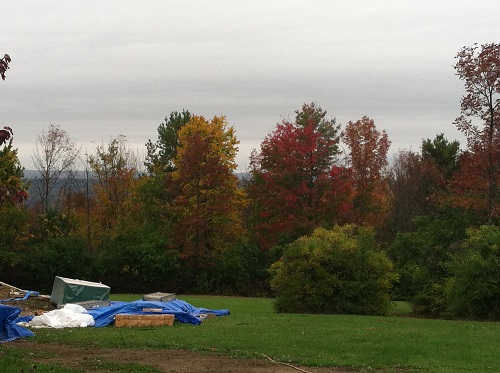 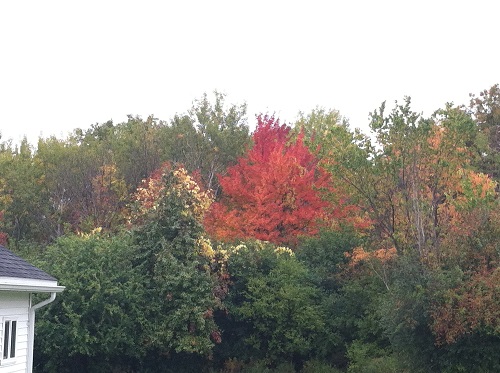 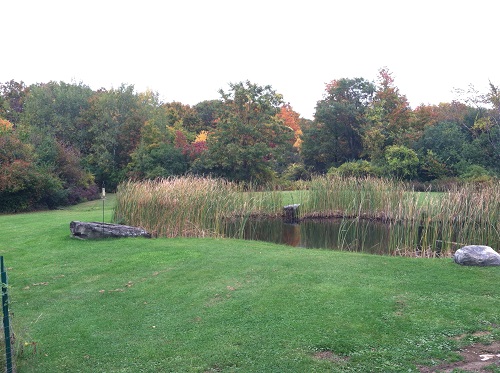 Seen amidst all the construction, from front yard, to side yard to back yard, to other back/side yard by the pond.  AND we got a short visit from the blue heron: 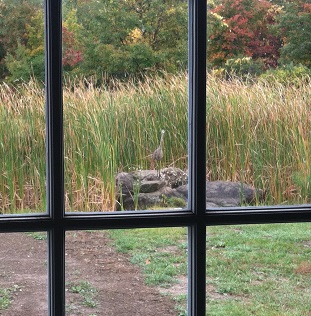 Not the small green one that’s been around all summer.  This is the big heron that flies in like a cargo plane and looks like a pterodactyl.  He only comes once or twice in the summer/fall.  One day I will get a really good picture of him.  Or a good-er camera.

So all the dreariness and frustrations were peppered with fun, yummy, pretty, good things.  And that made it not so bad.  Bring on Monday.

4 thoughts on “The Good and the Bad”