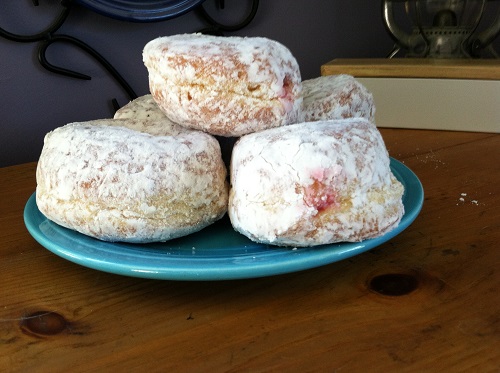 When we go to our drag racing events, often there is lots of socializing in the parking lot of the hotel we are all staying in.  Usually that’s the largest area in which we can all congregate.  Sometimes we bring chairs.  Sometimes we just stand or sit on the curb.  It’s fun just chatting and laughing with everyone.

Last Friday night, we were in the parking lot talking with Frank, who told us he recently had to make a business trip to our area.  At his conference there were baked goods.  He said he had the best donut ever and the hotel staff told him they came from a bakery called Bella Napoli.  He asked if we had heard of it.  Have we heard of it???????  Of course!!  It’s a very yummy Italian bakery that we love.  Great Italian cookies and yummy pastries.  I actually don’t think I have had their donuts.  Until now.  Thanks Frank.  Thanks a lot.

Frank described this raspberry jelly donut as something coming from heaven.  The light donut dough, the powdered sugar, the filling.  The best ever.  So good that on his way home, he went to the bakery and bought 3 dozen to bring home – raspberry, blueberry and lemon.  He called all of his family to come over so they could try these donuts. Then, when there were some leftover, he froze them so he could enjoy them later.  (I immediately thought this was the demise of those donuts but he said they tasted great when they were defrosted.)

So, the whole way home from Maryland – 5 hours – Paul and I couldn’t stop thinking about those donuts and wanting to try them.  Paul, in particular, loves jelly donuts.  I can be a little picky about them – the jelly can’t be too lumpy, there can’t be too much jelly, or too little jelly.  We resisted getting some the next day.  But we still thought about them.  We lasted a another couple of days but then I just broke down and had to get some.  Thanks Frank.  Thanks a lot.  Like we really need another food vice.  At that bakery.

Off I went to Bella Napoli…. 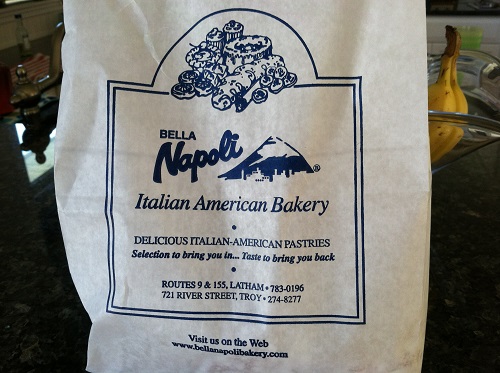 To buy a half dozen raspberry jelly donuts: 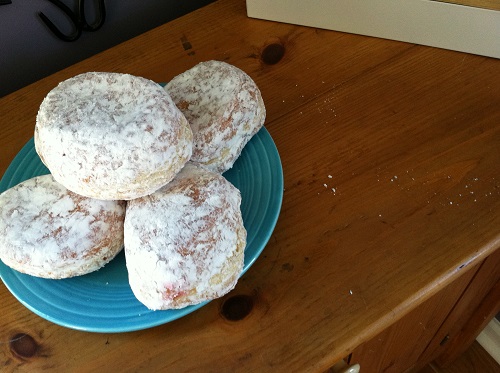 Of course, there are only 5 of the 1/2 dozen in that picture (ok, you can only see four, but there are 5), because I had to have one right when I got in the car.  And I got powdered sugar all over the place.  Thanks Frank. 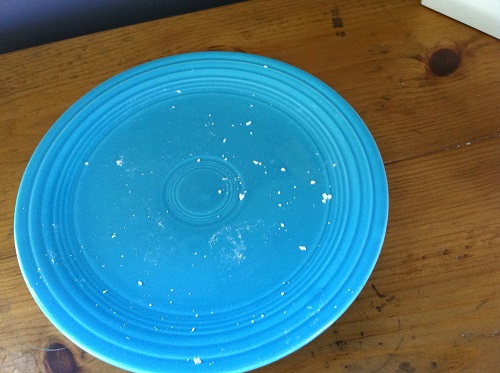 5 thoughts on “Thanks Frank.”