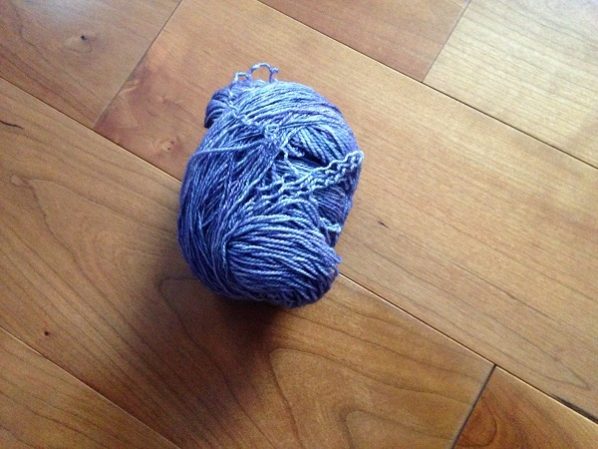 Things are yet again busy around here, and I haven’t posted for almost two weeks, so here is your catch-up post….

Last weekend, we had a great ending class to the Fish Lips Kiss Heel and by the end of class, everyone had a heel! 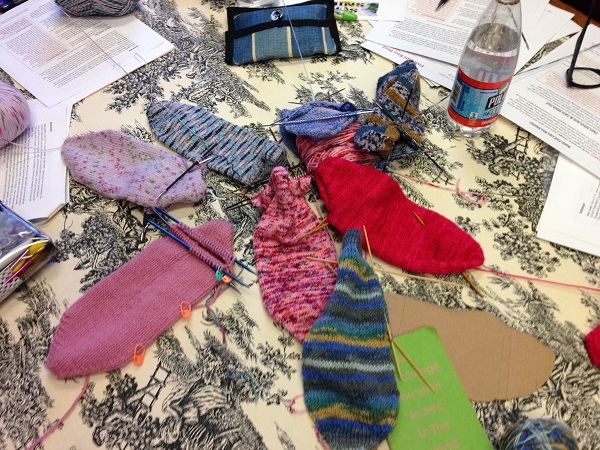 The next day, Paul and I went to the annual spring meeting of the Buick Club. (It really has another, official name, which Paul very patiently explained to me recently, but I already forgot.  But it’s understandable because there was some sort of name change at some point and all the t-shirts say one thing, but the official name is another thing, so I just call it the Buick Club.)  I worked on my sock while we were there: 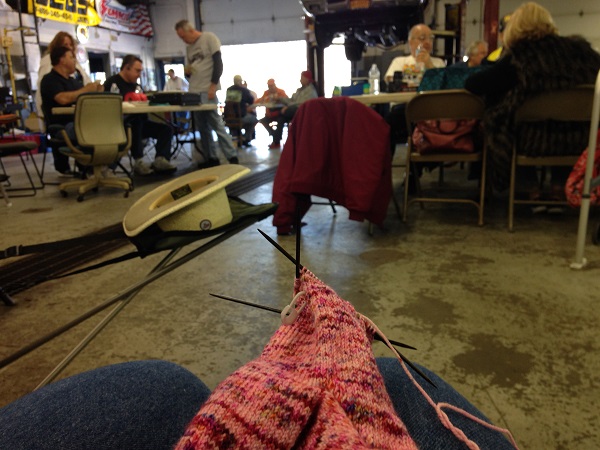 And we made our annual post-meeting trip to Red Rooster: 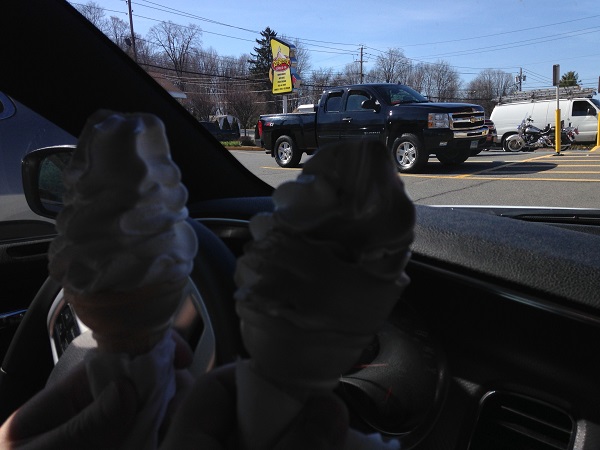 Then at home I finished my sock and now there is a pair! 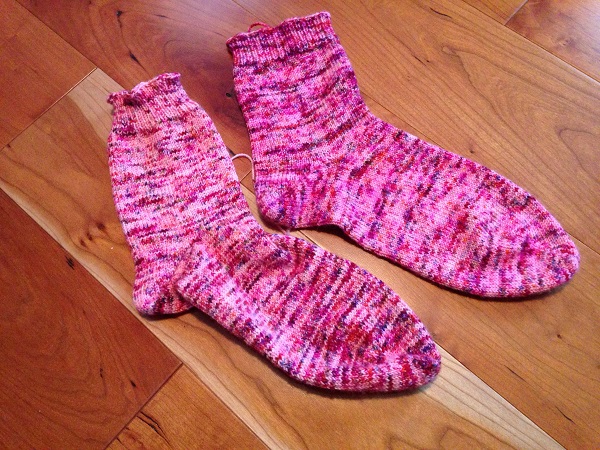 The one on the left is the second one, which had not been blocked yet.  It looks as if the colors in the right sock bled a little when I blocked it because the color is definitely different.  And they look like they aren’t the same size, but the one on the left will grow a little when it block it.  I hope.  To be honest, I forgot to write down the number of stitches I increased to in the toe of the first sock and when I did the second one, the first sock was on display in the shop so I couldn’t count them.  So hopefully I measured correctly on my template, and knitted with the same gauge.  And for you eagle eyes, yes I will weave in those ends someday.

In other knitting news…. I started the Sleeping Owl Tea Cozy: 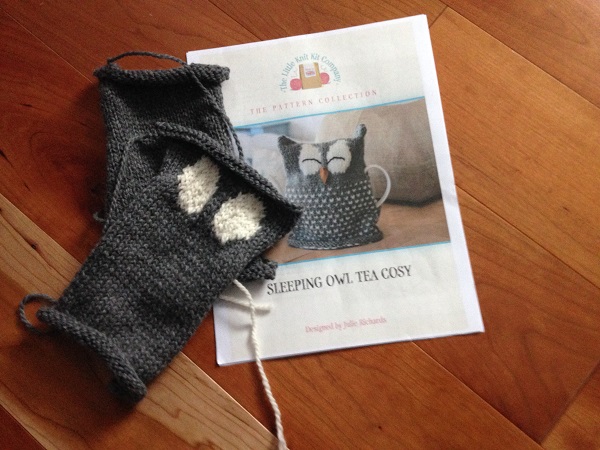 I am making a modification to this.  The pattern calls for flat two-color knitting which means two ends to weave in for every row with white stitches.  See how many rows there are (that is on the front and the back)?  Since I absolutely dislike weaving in ends, especially a lot of them, I decided to use this as an opportunity to practice and then teach duplicate stitches.  This means putting in those white stitches after it’s knitted, on top of the gray stitches, and you can use one continuous strand of yarn.  Stay tuned.  Hopefully my modification works.  And hopefully it will be a good class to teach!

I also started my not-so-super-secret knitting project for the someone I know going to college this fall.  I don’t know if he reads this, so it might not be a secret.  But, for those of you in-the-know, please don’t tell just in case: 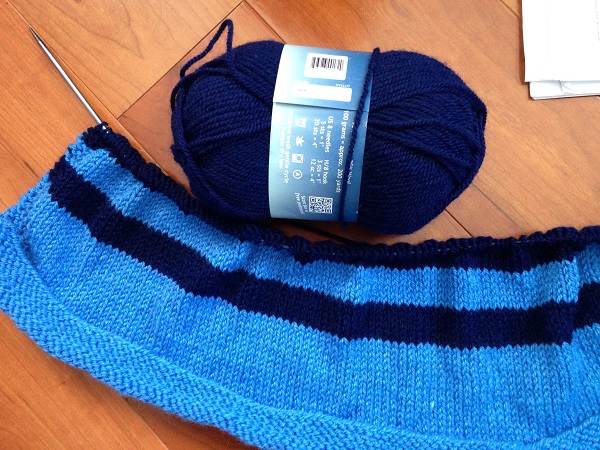 This is the #07 Striped Blanket from KnitSimple magazine.  It is currently on hold though because I need to add gray next and that is on order.

And finally, there were these: 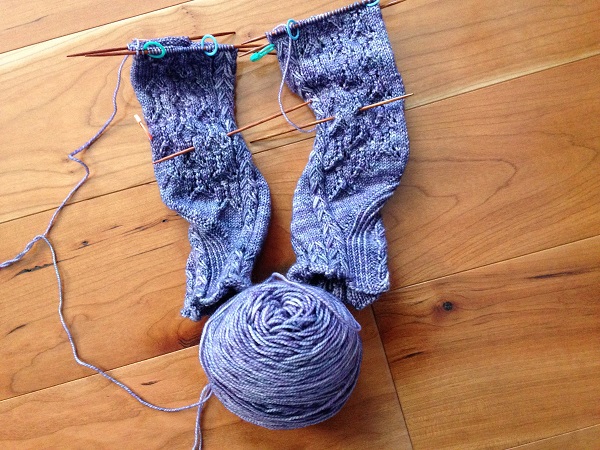 These were the Cocktails for Two knit-a-long socks that I started over two years ago (January 31, 2014).  They were hard.  At the hard parts I would put them down for a while to give my brain a rest.  Then, when I picked them back up, it would take me 10 years to figure out where I was and how the heck to do it.  So, I would put them down again.  At some point, I went to try them on and realized I had totally picked the wrong size to knit and they were too small.  So, I put them down again.  I would look at them every so often and wonder if I should rip them out and start the size that would fit me.  Because they really are cool looking.  And I really love the yarn, Madelinetosh sock.  Then I would decide to think about it later because the thought of doing all that really hard work again was daunting and not very appealing.  Well, the other day I thought about it again…. 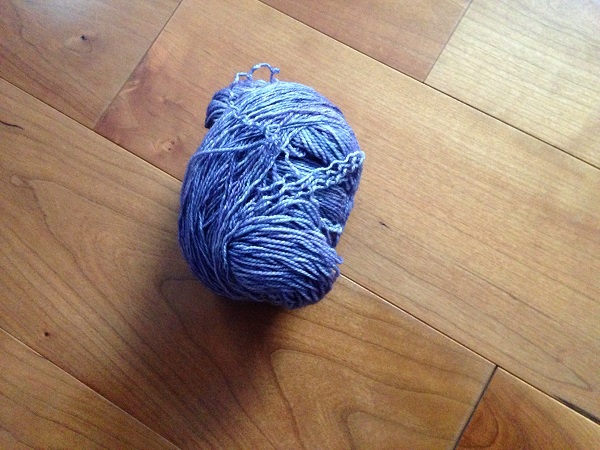 …. and I thought that there was no way I was going to knit that pattern again and I love the yarn so much so I will just make another, easier pair of socks with it.  Someday.

And now I am in a what-can-I-start-next-because-I-want-to-start-all-the-things-but-maybe-I-should-finish-some-things-first kind of mood.  So I haven’t knitted anything for two days.  Who can relate? 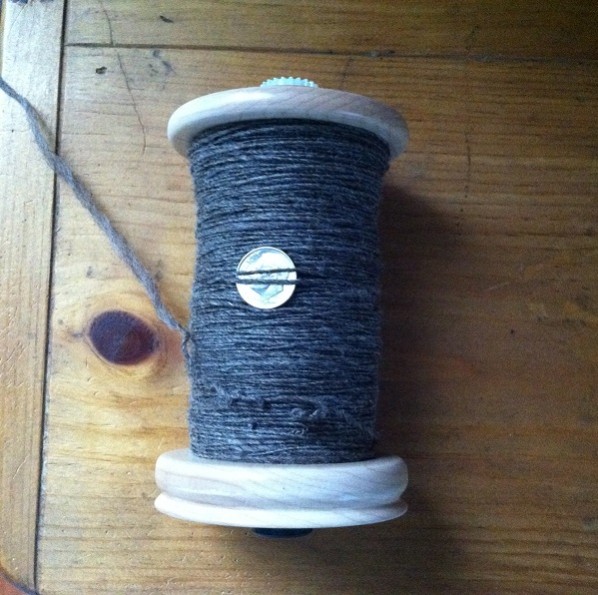 Ok, so I was going to be completely dramatic today and tell you that this past weekend I did NO KNITTING AT ALL on my fair shawl which means I lost TWO WHOLE DAYS of the very precious few I have to finish it.  The last time I counted, about a week ago, I had 53 days left before submission day.  I counted today to give you an update and now I have 60 days left.  My complaining seems pretty pointless seeing as how I’ve apparently gained some days.  (Guess I needed that math in high school after all.)

It was a busy weekend all around.  Friday, we sadly had to attend a wake in Connecticut for Paul’s uncle.  Despite the sad occasion, it was a time for the family to happily remember his uncle, whom I never got to meet, and I did get to meet and re-meet several of Paul’s other relatives.  It was a beautiful drive to Stamford and I think we went by Martha’s house in Bedford.  We only saw the gates but I’m pretty sure it was her place.  And on the way home we did dinner and ice cream: 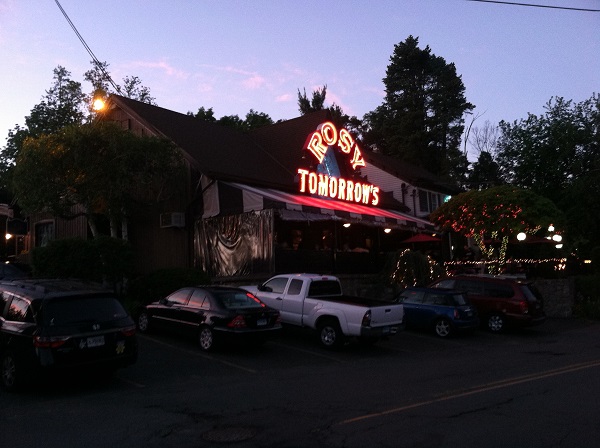 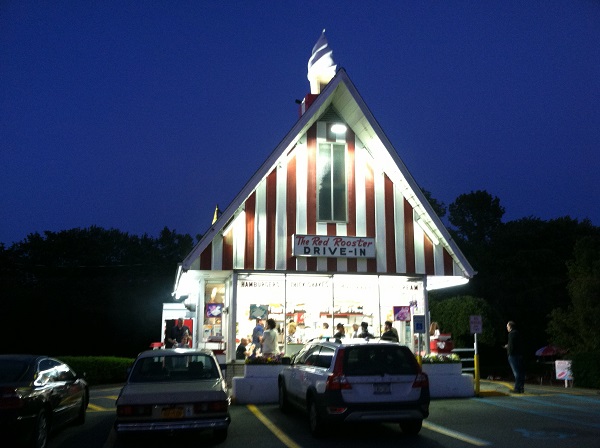 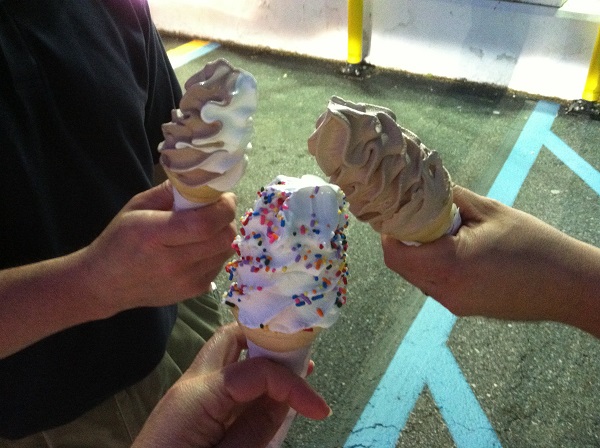 One of the things keeping me busy over the weekend was finishing up the Maluka shawl class.  Here are almost everyone’s borders when they got to class: 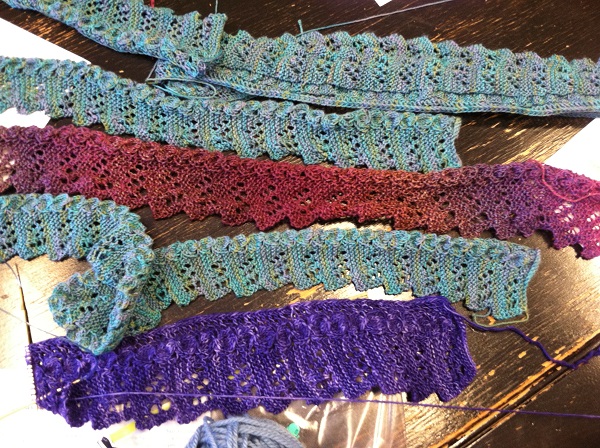 They learned how to pick up along the border and then work short rows to create the body of the shawl.  A fun class!

Then I had a nice day with my spinning peeps sitting outside in the shade, spinning and having lunch.

I finished half the wool I’m working on: 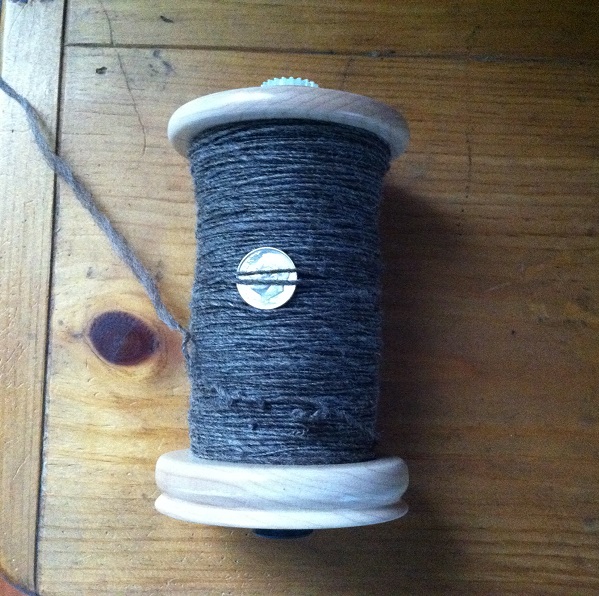 Now I just have to spin the second half on another bobbin, then ply them together and I’ll have yarn!  Which, if I get done in time for the fair, I can submit it to be judged.  After I finish my shawl.  But apparently I have more time now so…..