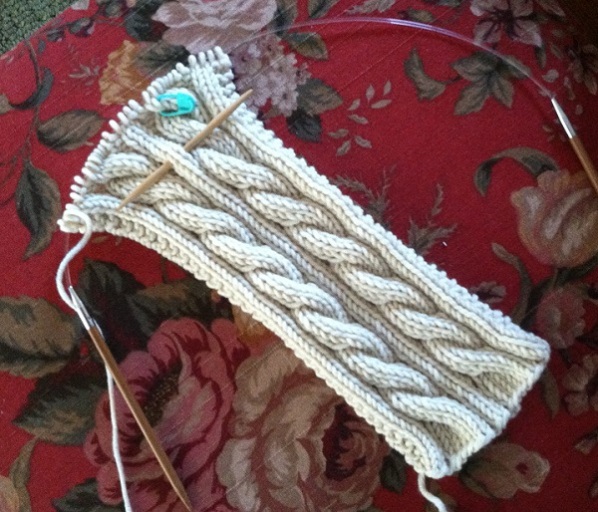 We set the clocks back an hour this weekend.  Apparently that was the end of daylight savings time.  I never know the difference – just that we have to move the clocks back or forward.  Every year, for the whole the day before we move the clocks, Paul walks around saying things like, “It’s 5 o’clock, but really it’s 4 o’clock”  or “It’s 11pm but really it’s 10pm so it’s still early” as a way of gearing up for it.  Then the whole day after we change the clocks, I walk around saying, “It’s 11am but gee, it feels like noon”  or “It’s 11pm but really it feels like midnight so boy are we going to be tired tomorrow.”  Every year.  We annoy the heck out of each other and there is lots of eye rolling going on.

In between all that, on Saturday, time really few by as I taught knitting classes at The Spinning Room all day. First up was a four hour Lace Shawl class.  Two people worked on circular shawls and two worked on 1/2 circle shawls and learned about knitting lace and blocking lace.  A fun class and here are 3 of the 4 started shawls: 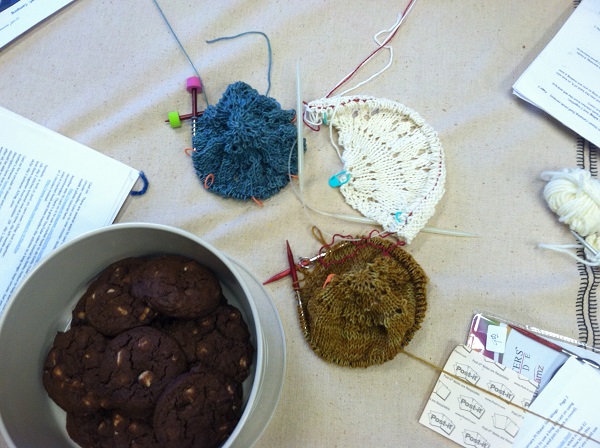 In the bowl are chocolate/white chip cookies I made because I promised them as a treat for taking a four hour class!  They were yummy.

Then in the afternoon it was a two hour class (the first of two sessions) to start a Colorwork Christmas Stocking: 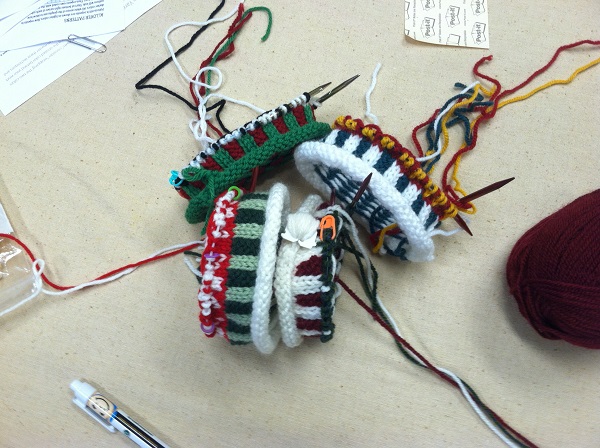 They learned to knit with a color in each hand, and work with a colorwork chart.  In a month they will come back and learn how to put in an afterthought heel.  A fun, fast day!

Then….. in no time over the weekend I’ve gotten 32″ knitted into this scarf, which will be a Christmas gift: 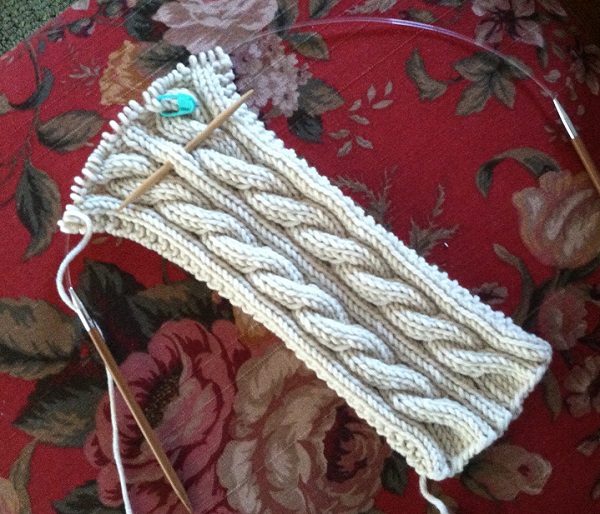 This picture shows about 9″.  It is a modified Irish Hiking Scarf, made with Berocco Pure Merino (a really nice, soft yarn).

AND I finished my charity knit-a-long hat using a pattern called Kitty’s Kap: 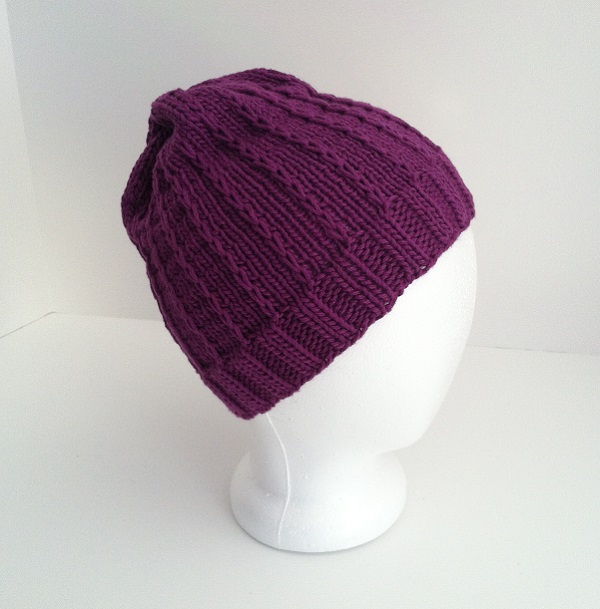 On Sunday morning, we were up early (although it felt later….) and I made a quick trip to our CSA’s farm stand to get a few more sweet potatoes: 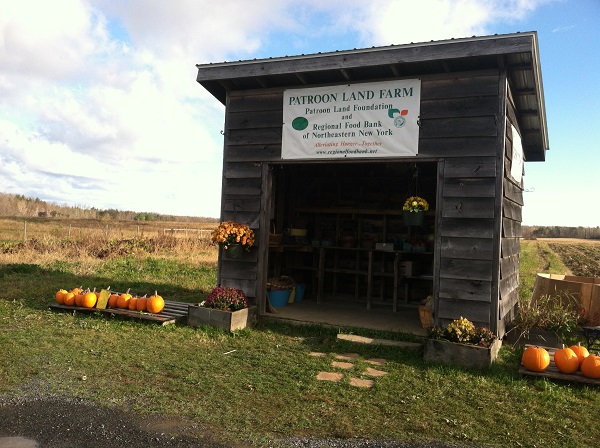 On my drive there, which is about 3 miles from our house, and further up “the hill”, I passed some snow.  I’m not ready for that yet.

I made Orange-Sage Sweet Potatoes with Bacon in the slow cooker: 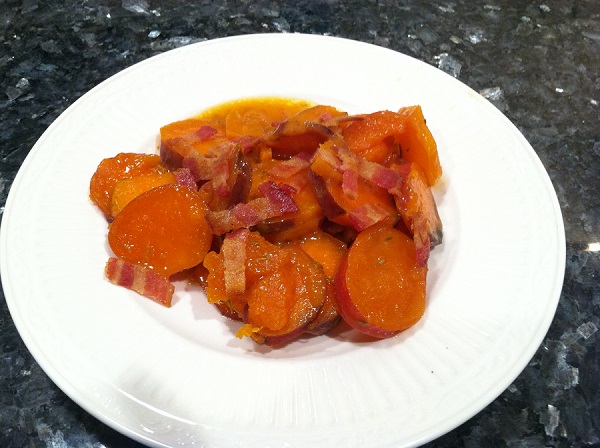 But I didn’t have sage so I put in the same amount of dried rosemary. Big mistake.  And I knew it was going to be, right as I threw it in the pot, but then I couldn’t fish it out.  Despite the pretty strong rosemary flavor, it was still very yummy and I will make them again.  With sage.

And now for something completely unrelated…. here is our peanut butter jar: 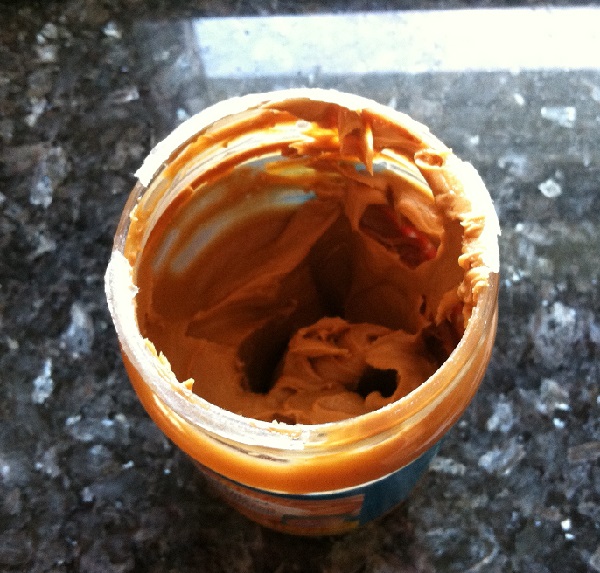 And, here is my mother-in-law’s: 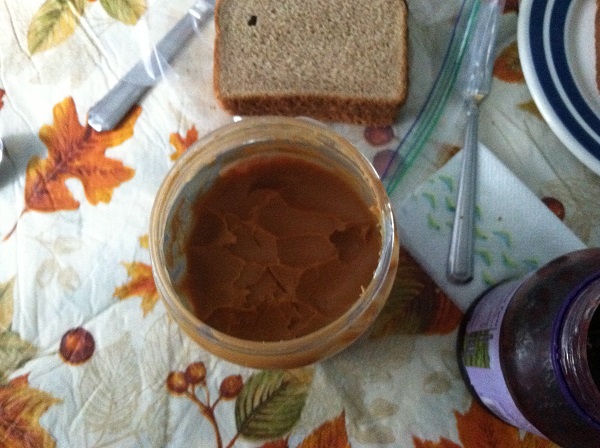 Did you ever see such a neat and tidy peanut butter jar?