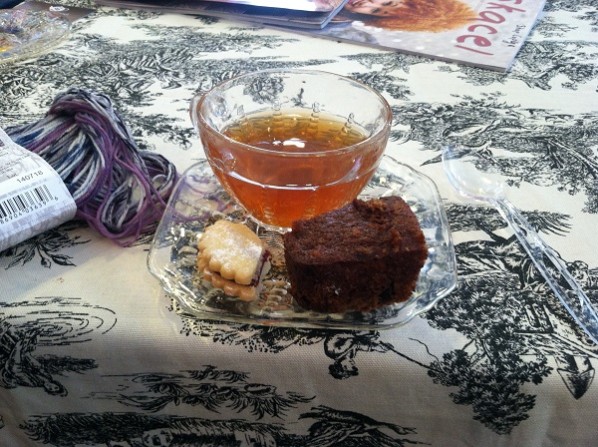 On Sunday, there was an afternoon tea at The Spinning Room yarn shop. 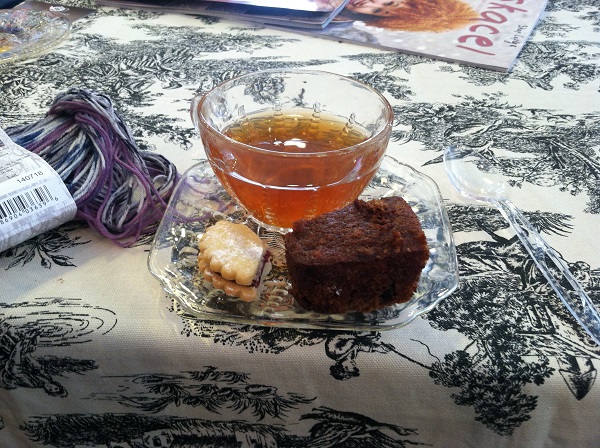 We had tea and goodies. And we knit, of course.

It was the second annual tea, being held to celebrate the new season of Downton Abbey, which we all LOVE.  Matt, from the Short and Stout tea house came to let us sample some tea and talk about making tea. 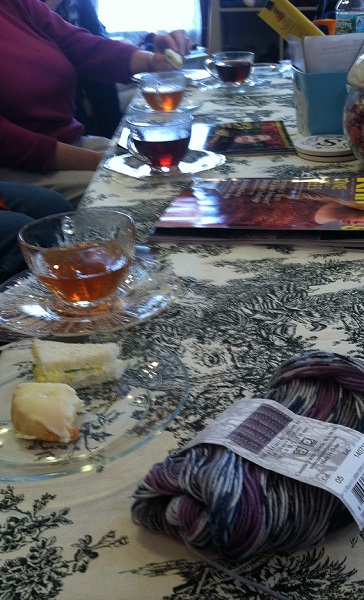 It was fun and interesting.  And I learned that I liked green tea.  I didn’t used to, and Matt said it was likely because I brewed it too hot, making it too bitter.  You are supposed to heat the water in the kettle until it makes the simmering sound, before it boils.  That means the water is about 180 degrees and the temp at which you are supposed to brew green tea.  Green tea is sooooooooo good for you, and now I will drink it more.  Especially the kind he brought, which was Japanese Something Something (note to self: find out what it’s really called).

I thought that it would be a good idea to bring a treat to share at the tea.  You know, something that would be easy to cut into two-bite pieces and put on a plate next to a teacup.  So I made Apple Crisp Bars (this is actually a rhubarb crisp bar recipe for which I substituted granny smith apples). 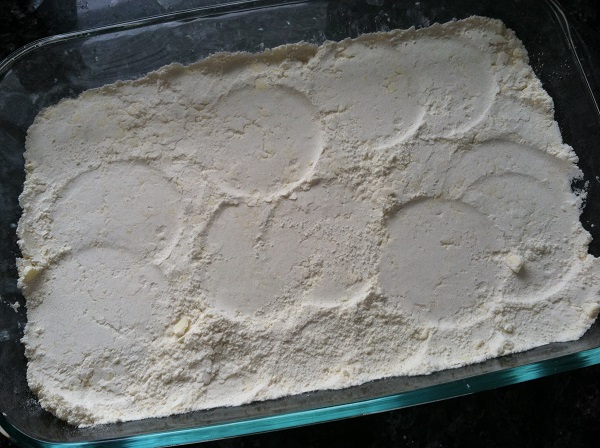 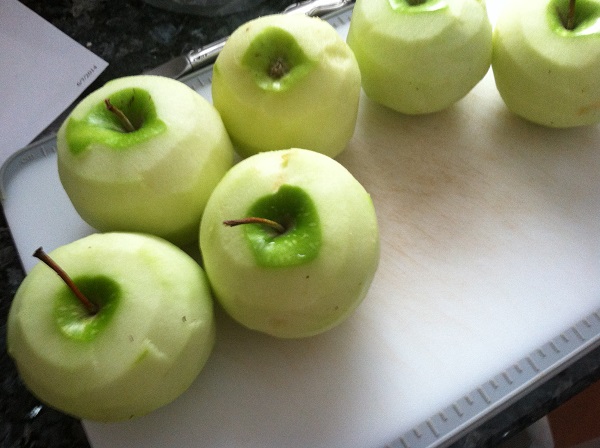 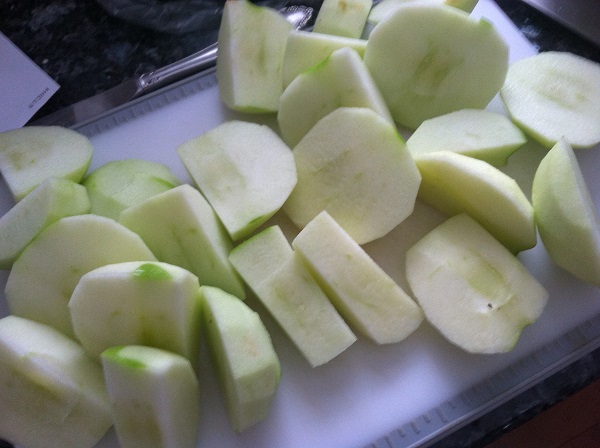 Then tossed with sugar and cornstarch and spread on top of the unbaked shortbread crust: 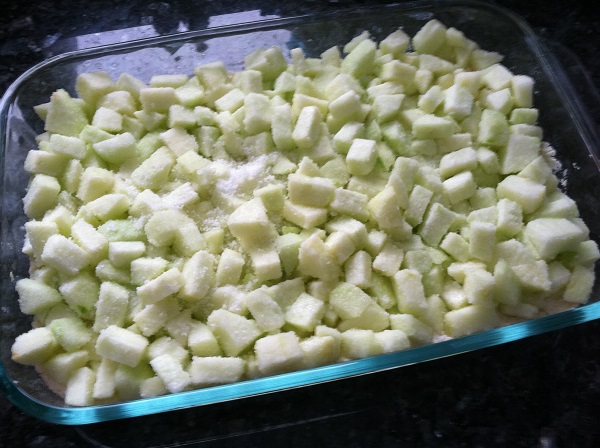 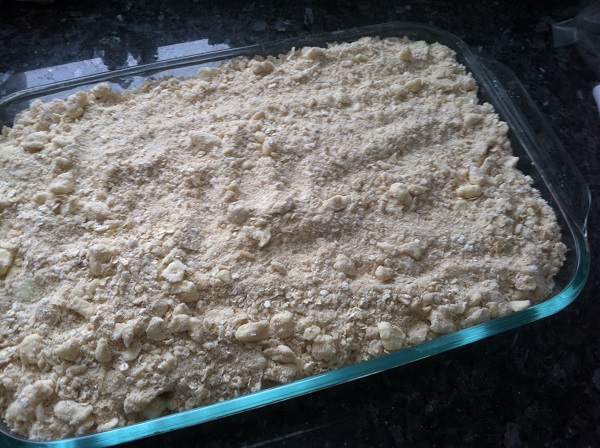 Bake for an hour until nice and browned: 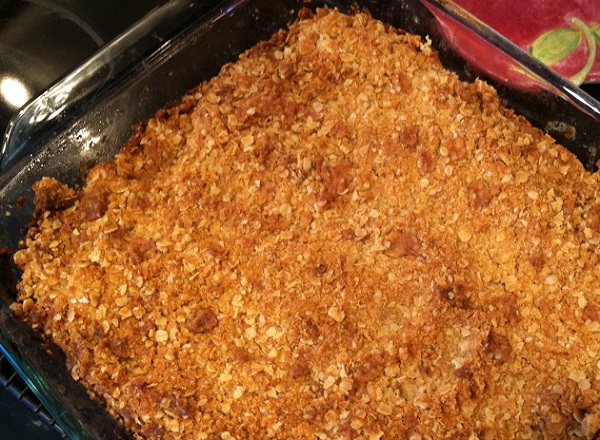 If you went to the tea and are reading this, you may wonder why you didn’t see them there. They came out of the oven an hour before I had to leave for the tea.   Which apparently was not enough time to cool, because they were still warm and when I went to cut them, they just crumbled apart.  Not good.  Definitely not a good option for a nice afternoon tea and taking an elegant bite of a treat while sipping tea.  After I got home from the tea, they cut into pieces perfectly. So, they are now in the freezer and I will bring them to the knit-in on Wednesday.

A fun Sunday afternoon!  But before that was Saturday, and a busy day of teaching knitting classes for me.

First was the Two Socks on One Circular Needle class: 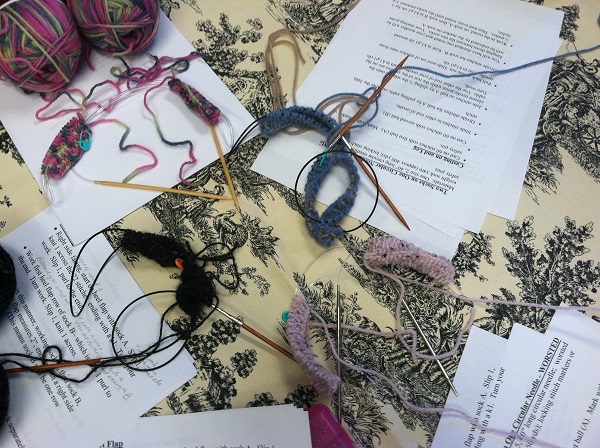 I know it doesn’t look like much got done, but everyone was well on their way to knowing the magic loop technique!  They went home to practice and do their homework, and we will meet up again in two weeks to work on the gusset.

Then was another session of the popular Oatmeal Stout cowl class: 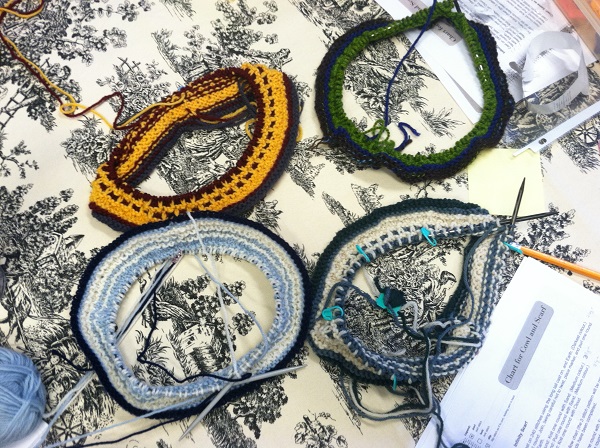 Yet again, unique and interesting color combinations.  A busy but fun Saturday!

Then, last night I finished my Simple Chevron Stripe Scarf ! : 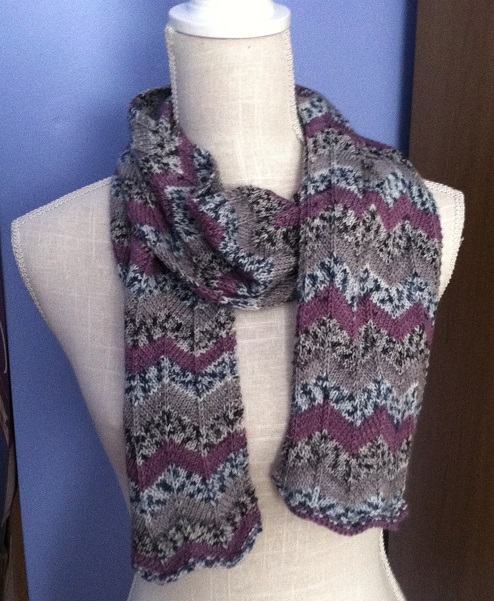 A great pattern – really simple and relaxing to knit since it is only two, very easily memorized, rows.  It took me about a week and I used all but about 3 yards of a 437 ball of yarn.  I love it. And I’m tempted to knit another with a new yarn that came in to The Spinning Room this week called Indulgence Cashmere.  A really soft yarn with wonderful striping colors.  I don’t usually knit two of the same pattern unless I’m knitting gifts, but I would knit this again, with that yarn.  It’s a perfect in-front-of-the-tv pattern.

Next post: Soup! and Bread!  And probably more Knitting!