For us to eat healthy, Sunday meal planning and prepping has become really helpful. I posted about this pretty recently with some great recipes we made.  It also helps to have some things already done so that on our busy days, preparing a healthy dinner isn’t as hard. Sometimes it works out really well (like that day) and sometimes….. it just doesn’t.  This weekend, it was a mixed bag.

We went to the grocery store and got all our supplies.  Lots of fresh veggies and fruit. (And some other stuff I’ll tell you about later.)

Paul made a big bowl of salad that we will dip into for several days:

) I have broken no less than three salad spinners.  One with a rip-cord and two with a round cylinder to push down.  This one has a lever and just works so great.  Salad spinners can be a little pricey but I think they are well worth the time and aggravation it saves in trying to dry lettuce the other way (pick any other way).  Also, if the other way is using a ton of paper towels, a salad spinner is much better for the environment!

Next up was a Crock Pot Mexican Casserole from Well Plate (Again.  Yes, it’s one of my new favorite food blogs!). 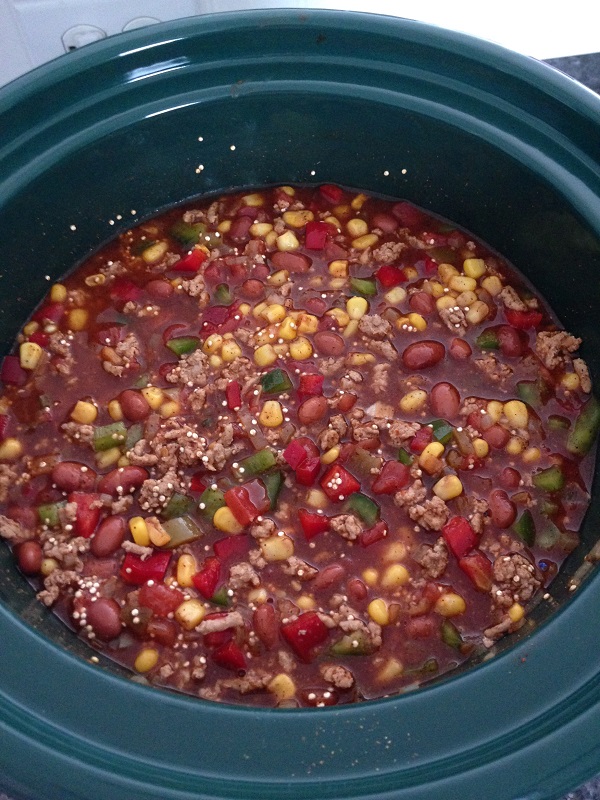 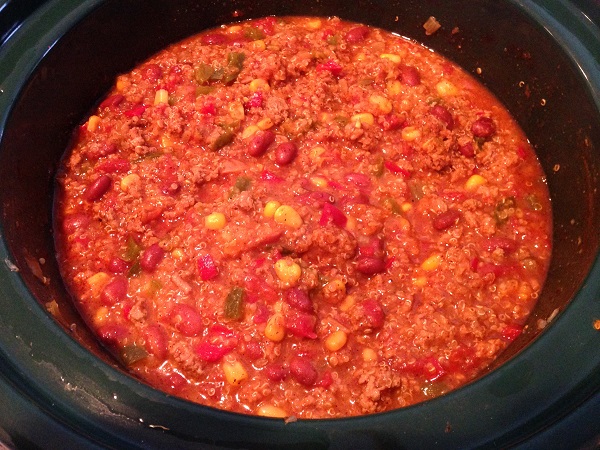 Very healthy with ground turkey, quinoa, beans, and lots of veggies.  And so tasty! Even better with a little extra cheese, scallions and cilantro on top!

Our attempt at healthy pizza for our meal planning Sunday was only mildly successful.  We decided to make it relatively healthy by using a wheat pizza dough. Thus, we were skeptical from the start.  We are MAJOR fans of pizza.  Thin, charred crust is the best! [We someday would like a stone, wood fired pizza oven so we can make pizza just like Pepe’s in New Haven.] However….. since we are trying to be somewhat health conscious, we decided to try the wheat.  But, the wheat crust was not the only issue…. 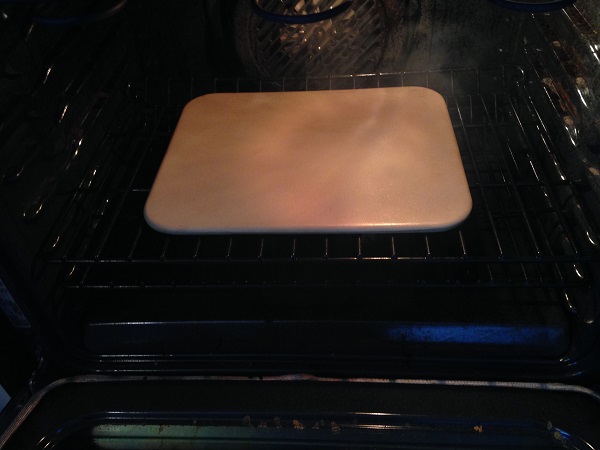 ….which we decided to try for the first time.  While it was heating up in a screaming hot 500 degree oven (and creating lots of smoke because of the cooking spray it said to put on there), we put the pizza together.

Issue #1: We did not have a pizza peel

.  So we decided to use the back of a cookie sheet so we could slide the pizza off onto the stone (Ha!). 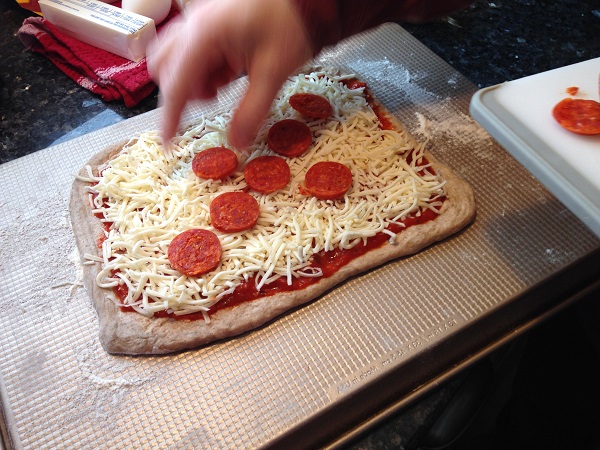 [Notice the addition of the pepperoni to our “healthy” pizza?]

Issue #2: We did not have any cornmeal to put under the pizza to make it slide off the cookie sheet.  So we used a bunch of flour.

How did that work out you ask? Ha! 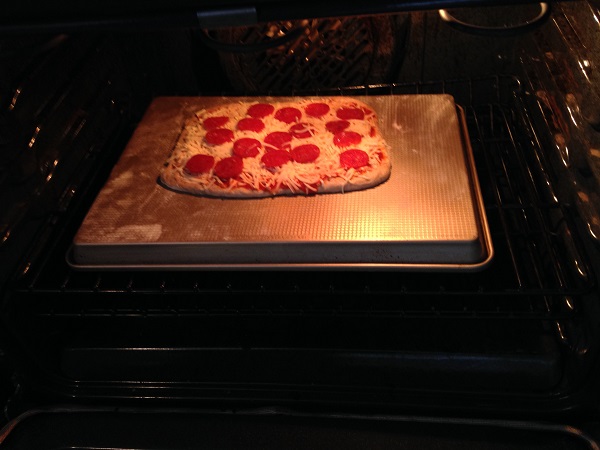 It didn’t.  Into the oven went the cookie sheet, on top of the stone. 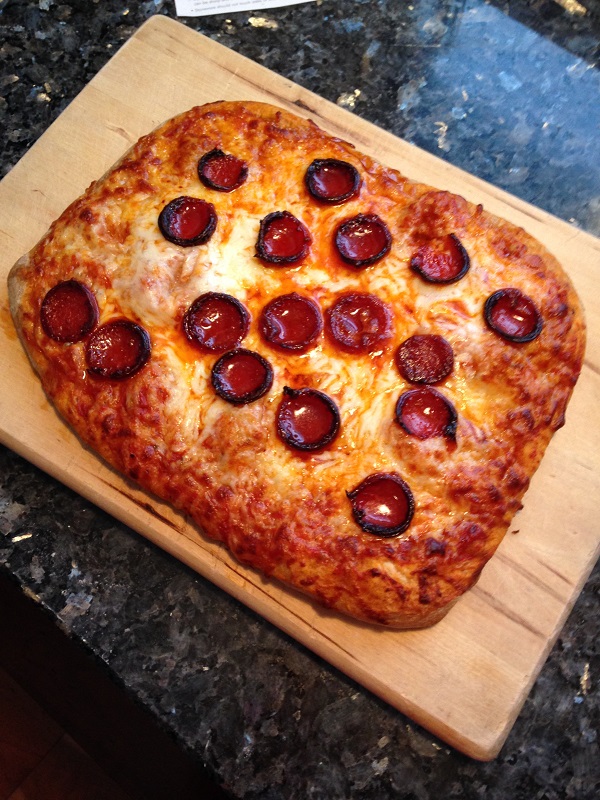 It came out only ok.  It looked pretty good, and that charred pepperoni was the bomb. The wheat crust? Meh.

Issue #3: We were not patient enough to let the dough rest and we should have so that we could make the crust thinner.  It would have been better.  As it was, it was pretty doughy (and wheat-y) in the middle.

The last thing I made was a pan of Tollhouse cookie bars for our friend Tyler who is coming to work in town this week.  He is a carpenter and makes beautiful post and beam buildings (his company is Pioneer Post and Beam). They have chickens (and pigs and cows and a horse) which are laying 2 dozen eggs a day (!!) and he is bringing us some since he will be in the area.  He likes my cookies so he gets them in exchange for the eggs: 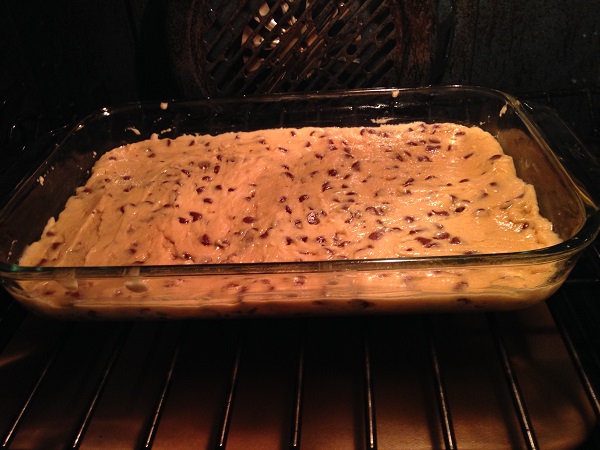 A last note about our grocery store trip in which we purchased healthy stuff: 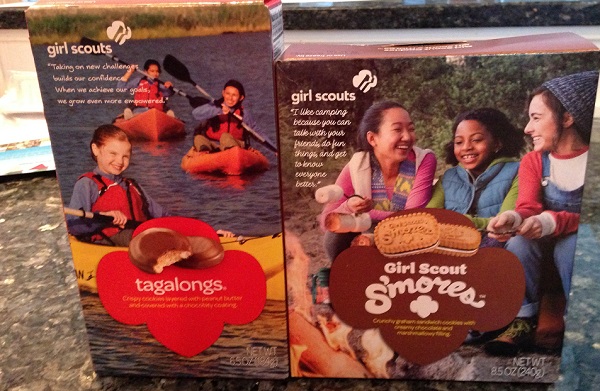 We got suckered, and it’s all because they came out with the s’mores version.  And the tip from the girl scout behind the table who said to put them in the microwave.  To be honest, they weren’t all that I wanted them to be.  They could work on making the “marshmallow” taste more like marshmallow.

Isn’t stopping me from having them on my afternoon break though: 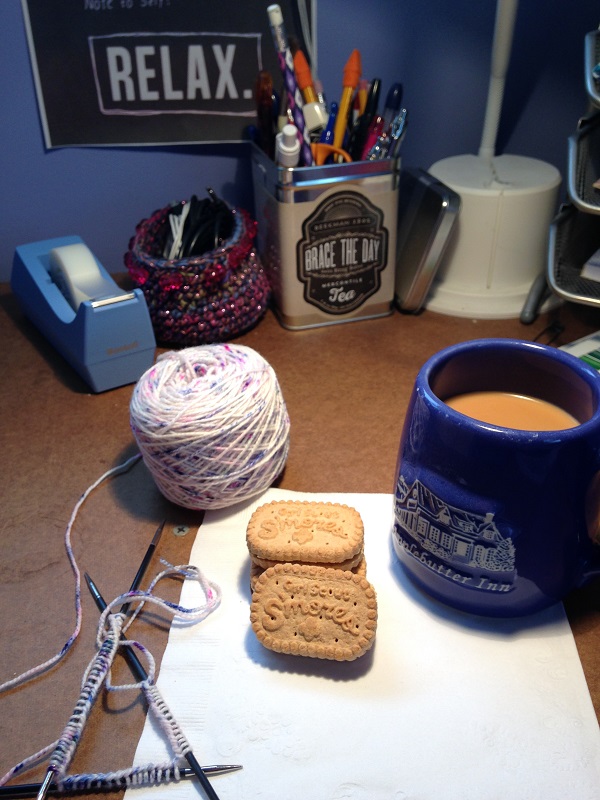 (I’m starting my second Apple Blossom sock before I finish my first one, so I won’t not knit the second one. And in case you are remembering my last post in which I showed you a picture of the class I taught on how to knit two socks at the same time…. I actually don’t like to knit my socks that way! Double points are just my favorite.)

So, meal planning this week didn’t go as well as we would have liked but we’ll keep trying. Paul is having fun learning new recipes!  Do you do any meal planning for your busy week?

One thought on “Sunday Meal Planning”