Steeking the fear right out of me.

Ok. So, where we last left things was that I was going to attempt the steeking of Paul’s Perun vest when I was freshly awoke today.  I woke up at 4am because the wind was trying to blow the house down, so I figured I needed to get up to make sure I could hold the house together if it started falling apart.  Seeing as how I was wide awake, I did a few hours of my proofreading work.  For some reason that seemed ok to do at 4am but steeking was not ok to do at 4am.  I waited until 8am.  Not freshly awoke but not a zombie yet from being awake at 4am.

To refresh your memory, here is the before:

(By the way, that collar will be folded over and stitched down.  It is not some weirdo cardigan/turtleneck styling option.)

I busted out my hardly ever used sewing machine and found out that it actually still works and I didn’t even need to oil it or anything.  Not that I have any oil or that I would know where to put the oil.

First I made two rows of stitching, one on either side of the area that I needed to cut.  I happened to have a walking foot from my quilting days, so that made things go much more smoothly.  The first time I did it (yes, the first time, as opposed to the next time….) I did it with the right side facing, trying to follow a column of purl bumps: 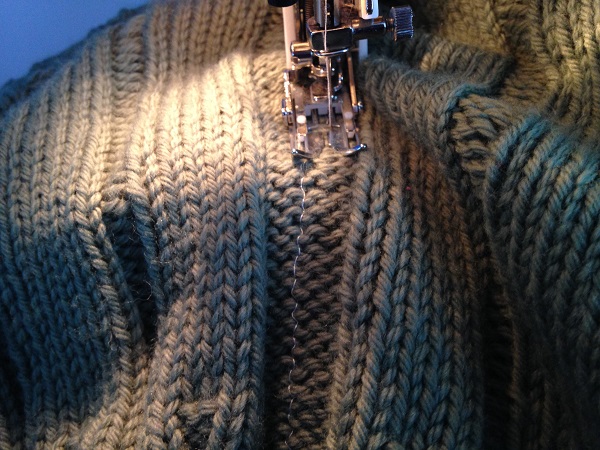 When I was done and not terribly happy with the not-so-straightness of it.  I realized this: 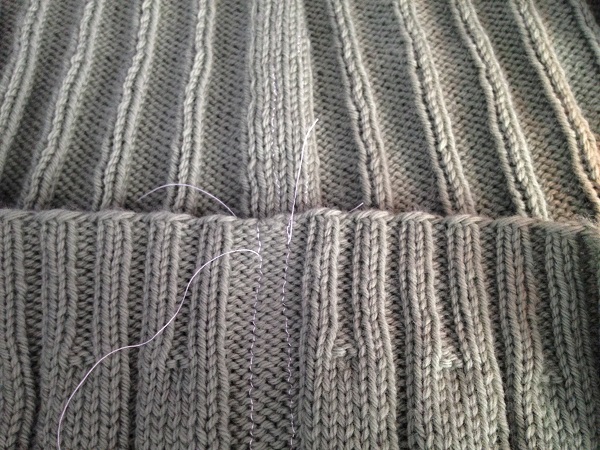 The “wrong” side has nice straight columns between the stitches, to follow with the sewing machine.  Out came the first set of stitches.  On to much straighter stitching: 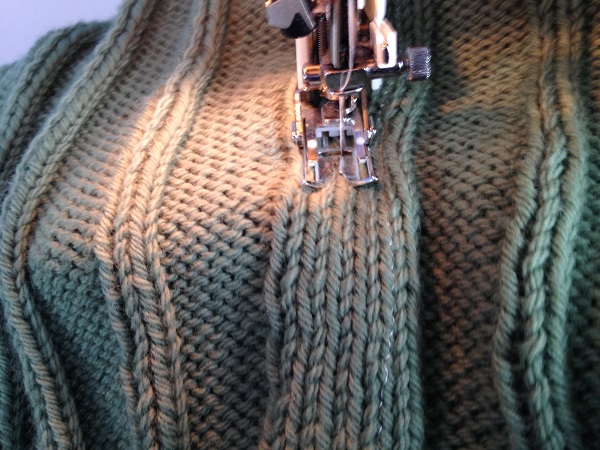 That was done and it was time. Ugh.  Time to cut right up the middle of all that painstaking knitting I did for hours and hours and if I messed it up it would all unravel and Paul would have no vest to wear.  With that in mind, I invited Paul to watch (and take pictures):

(As I started cutting, he was remarking that my hands were shaking, which gave me all kinds of confidence.) 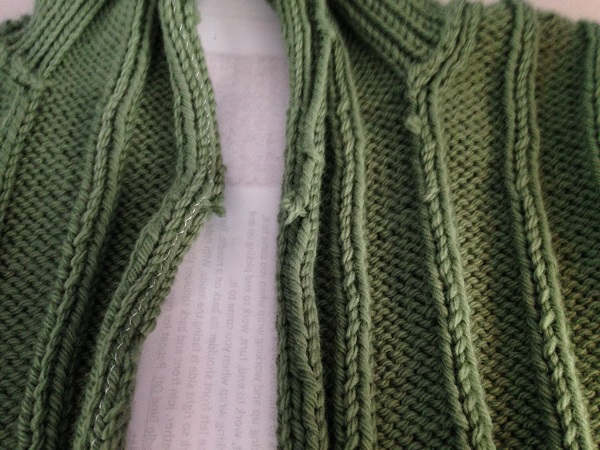 It was done.  And I was trying not to worry about those frayed, cut yarn ends.

And now that it’s done, I’m glad and it wasn’t terrible and now there just isn’t a darn thing I can do but keep moving forward because I can’t un-steek it.

On to zipper installation.  Here is where things went all kinds of more wrong.  I changed to my zipper foot and well…it just…sort of…well, sucked.  Because it was no longer the walking foot, which you use with thicker fabric so things don’t stretch and get skewed, things stretched and got skewed and even though at the outset the zipper was the right length, it ended up 5 inches too short and the fabric got all rippley and wavy.

Oh man, that just really was awful.  As I undid the stitching (which is much harder to do with a zipper), I came to the realization that I will have to sew this by hand.  Blech.  Then I started worrying that all that sewing and undoing was making the cut part get too frayed and that hand sewing it will make it even worse.  So, now that my fear of steeking is conquered, I have a fear of hand sewing a zipper.  After that, I decided I had enough for the day (at 10am) and put it down.  As long as I don’t obsess too much about those frayed ends, I will attempt some hand sewing, maybe tomorrow, when I am yet again freshly awoke.  Stay tuned.

In the meantime, I finally found a shawl pattern that I am excited to knit and to teach! 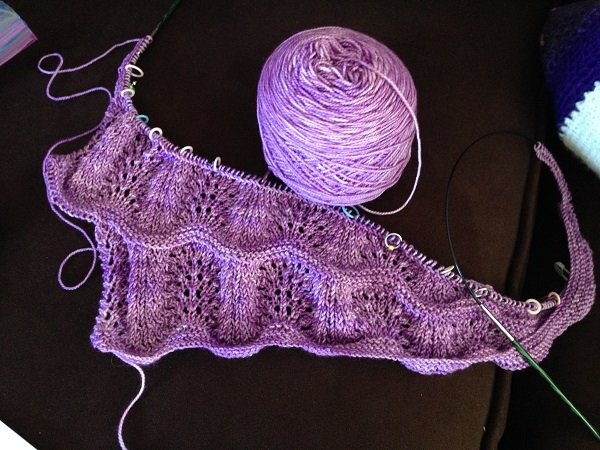 This pattern is Diane by Romi Hill.  I. Love. It. Already.  It’s got a really cool construction which will make for a fun class for people to learn some new things.  And it is pretty.

And here are some non-dishcloth-background pictures of the Song of the Sea cowl. 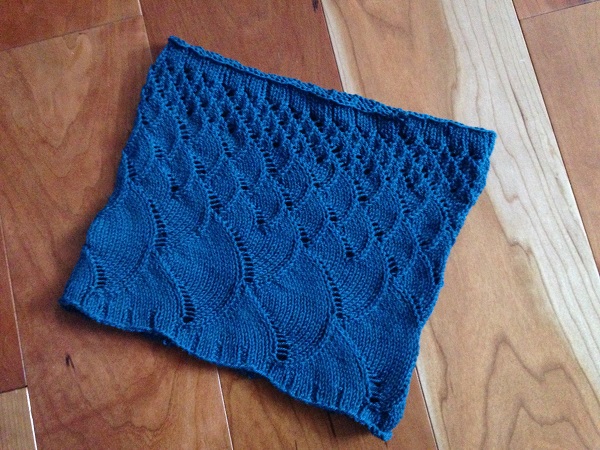 The top picture is the more accurate color.

And finally, a book recommendation.  I just finished The Nightingale

That is all for today.  I’m going to knit.

2 thoughts on “Steeking the fear right out of me.”