Saturday morning around here was cooooooooold.  The pond even started icing over: 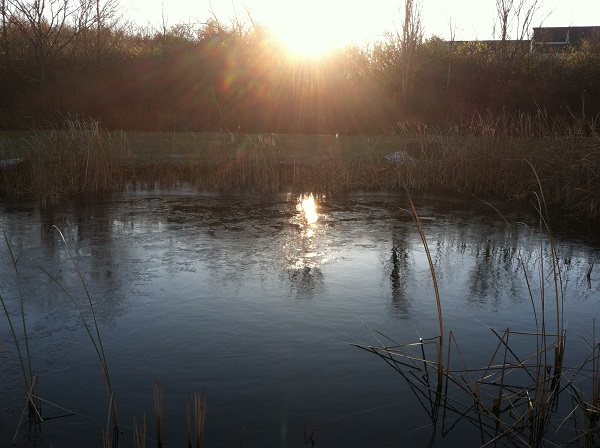 ….and the grass was crunchy.

So it was a perfect day to teach my Owl Hat class – to make a nice cozy hat for kids or adults (the pattern is called Chouette): 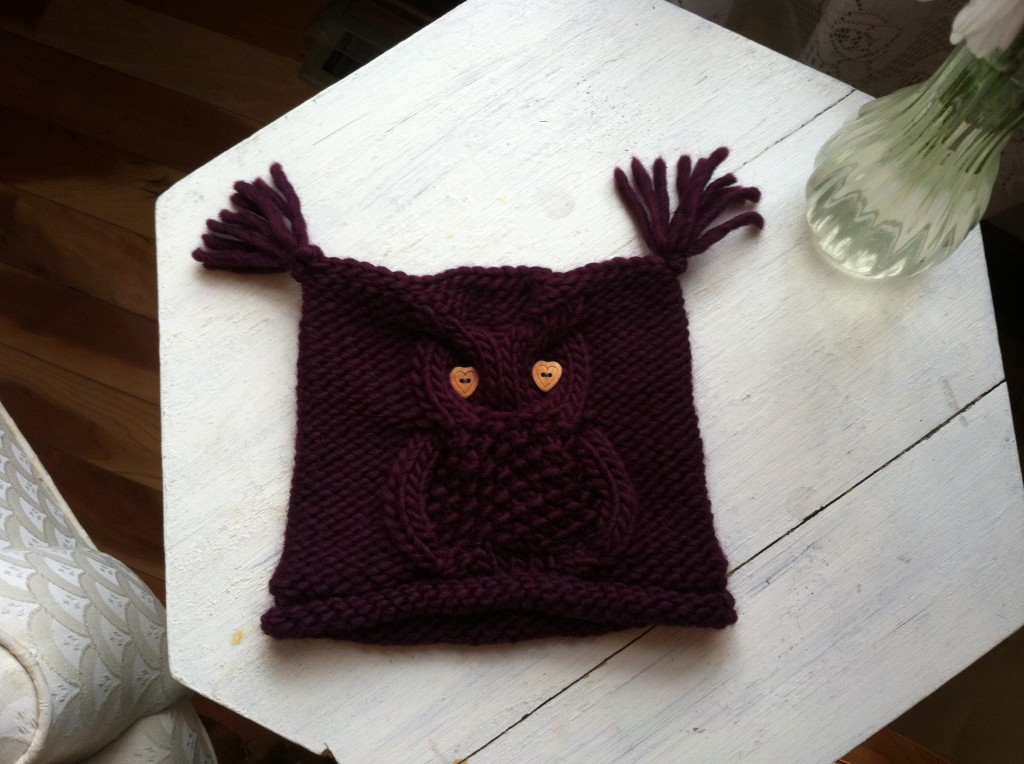 I love it when a class goes well.  Most of the time they go pretty well, especially because I’m a nut about making sure I’m prepared and stress out about not forgetting things.  But sometimes, due to various circumstances, a class gets derailed a little, or just doesn’t go as smoothly as I had planned.  But on Saturday, the Owl Hat class went very smoothly and everyone commented that it was a great class and they were just thrilled with how their hats were coming out.  Sue came to class with more than her homework done and therefore was able to finish her hat by the end of class…. 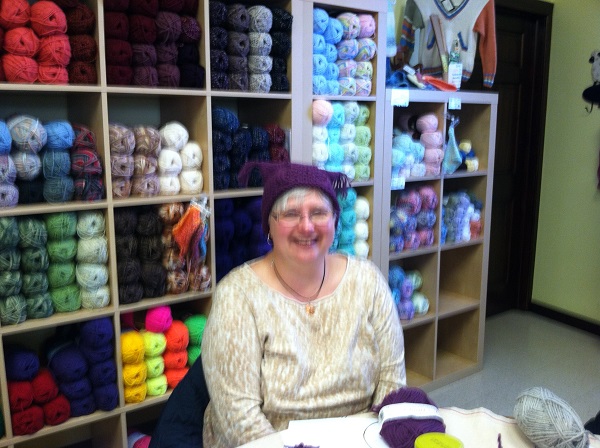 (Sorry about the blurry picture.)  So adorable.  And she’ll be making another, teeny tiny one to give to her due-in-March granddaughter.

Here is almost everyone’s progress (someone had to leave early): 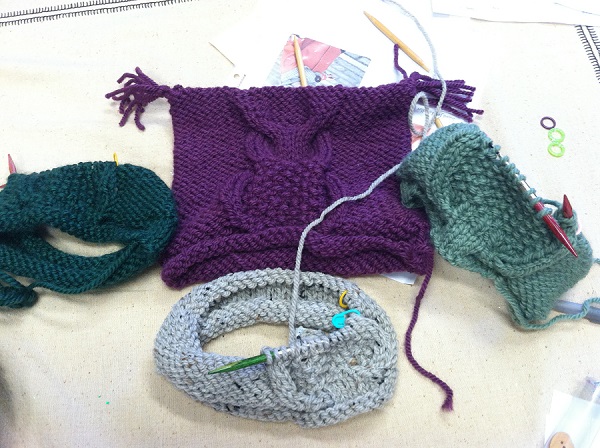 Then there was my test pie.  I decided that in addition to a sweet potato casserole, I would bring a pie to Thanksgiving dinner.  Since I’m still not terrific at pie, and I had heard about a new crust recipe from Cook’s Illustrated (found an online version here), I decided to make a test pie before making one for Thanksgiving.  This recipe has vodka (!) in it, which is supposed to help with the flakiness. (The alcohol cooks out.)

So, you get a picture of the pie in the oven: 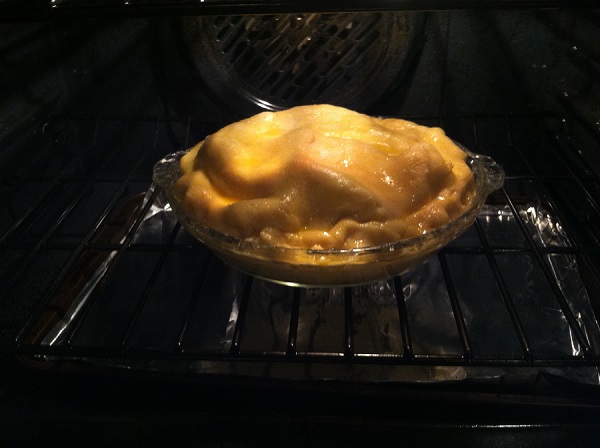 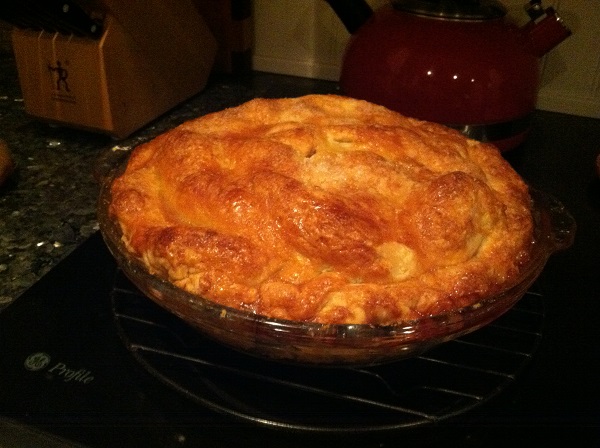 And after it was cut into, since I forgot to take one of a piece on the plate: 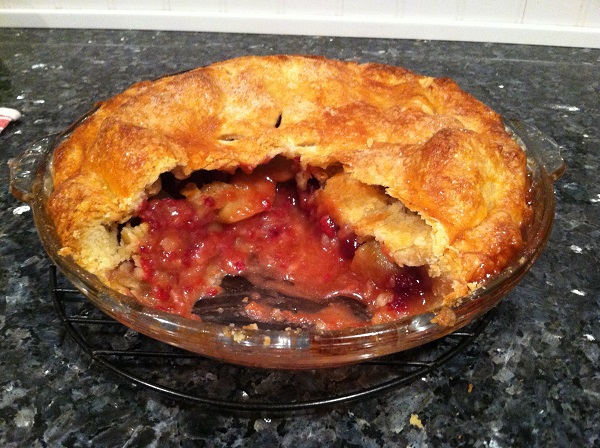 Looks pretty messy because we ate it while it was still warm.  And, boy was it tasty!  The crust was definitely crisp and flakey.  And sweet since I sprinkled sugar on top.  The inside was yummy too, although I still have to figure out the secret to the crust sinking with the cooked filling so there is not a huge gap.  Maybe there is no secret.  Maybe it just does that.  Paul and I both gave it two thumbs up and I will definitely make one for Thanksgiving!   If you are interested, I used the vodka crust recipe above with Martha’s Brown Butter Apple Pie recipe and added raspberries.

Not much knitting news to report except I worked on this: 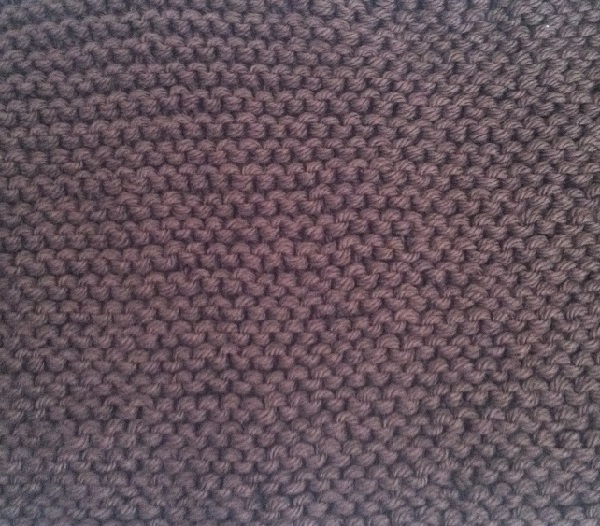 And I’m hard at work on my next design!