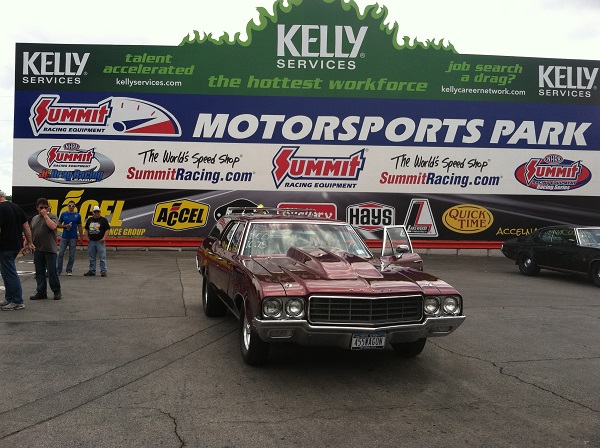 This past weekend was our yearly car-racing trip to Ohio.  It was a mixed-review weekend.

The trip out on Thursday was great.  Sunny skies, not much traffic…. 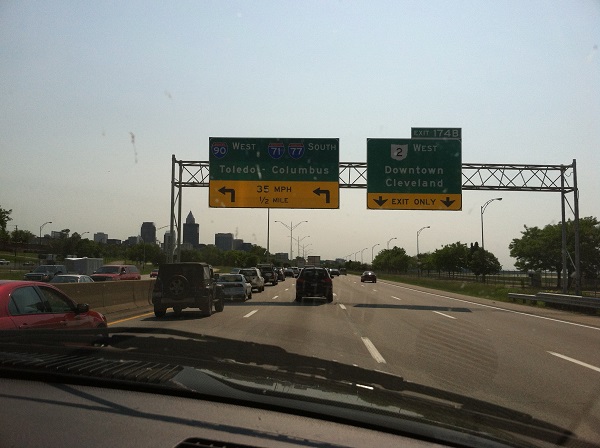 Friday was also a beautiful day.  Lots of racing: 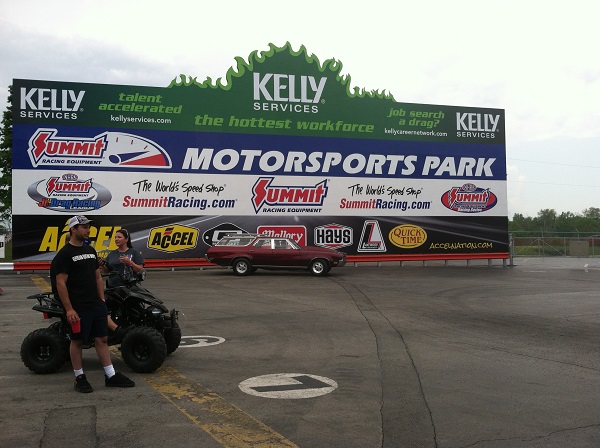 The event was held at Summit Motorsports Park, which hosts national drag racing events, so that means it was a pretty nice track.  To Paul and Rob, that means a nicely maintained drag strip, well-run racing and good places to pit their cars.  To me, that means good options for treats like ice cream, and clean bathrooms. 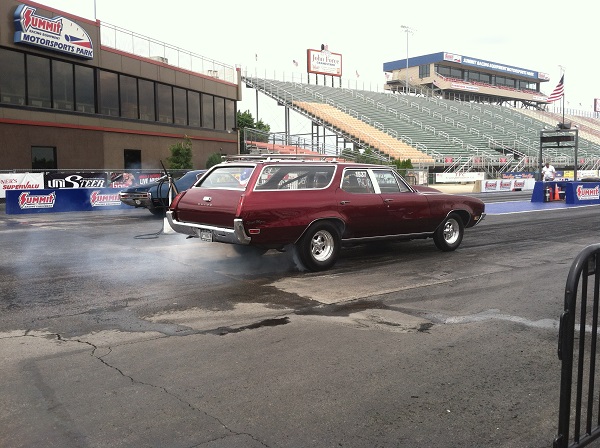 Only a little waiting for oil-downs to be cleaned up: 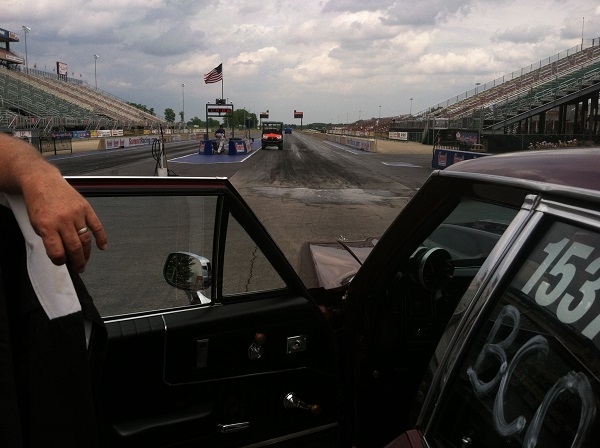 Ray made his trips to tow Rob’s car: 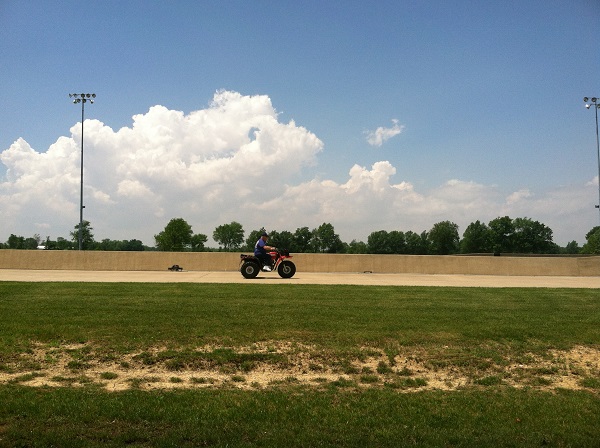 Ice cream at a local dairy: 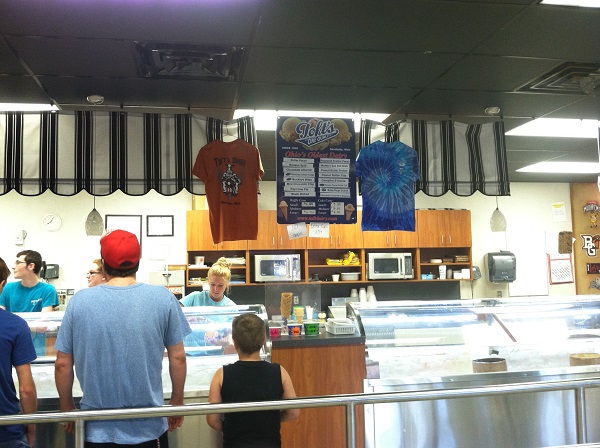 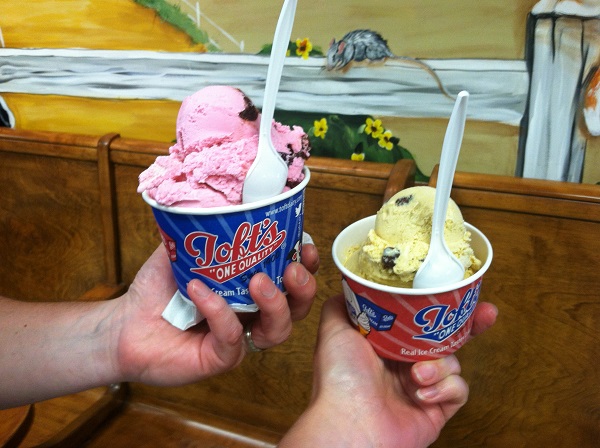 And Rob’s wife, Martha, got to come with us on the trip this time!: 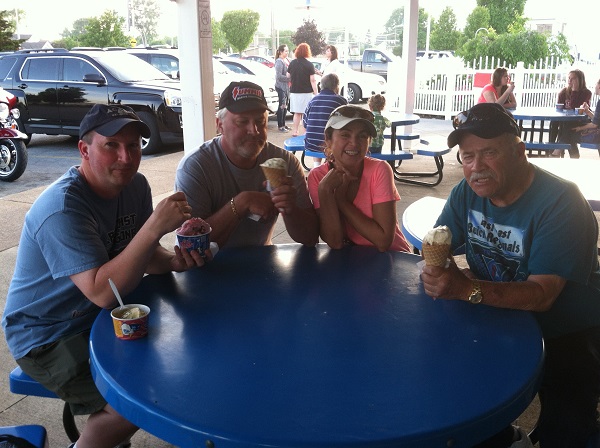 Saturday was, well, a little bit not as good.  There was some racing, but also a little fixing: 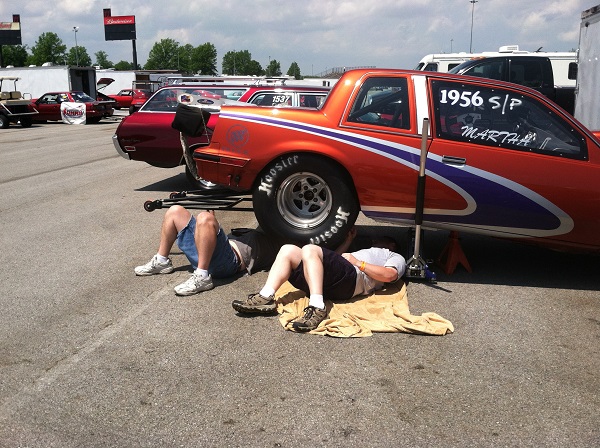 And there was more ice cream: 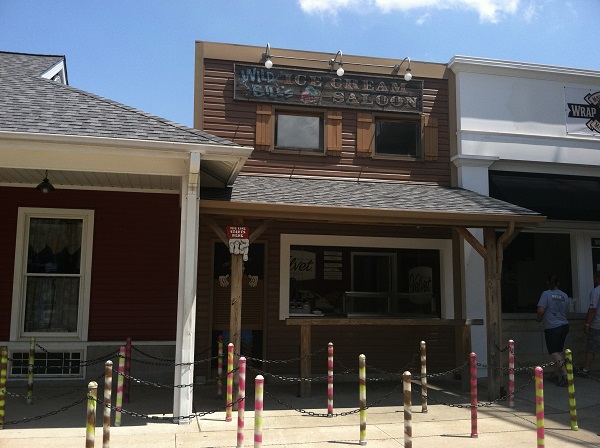 This place sells the yummiest ice cream for a dollar a pound.  A DOLLAR.  For A POUND. (Forgot to take a picture, but it was a very large cup of ice cream.)

There was the sitting and visiting (with Martha and Rob’s friends Diana and Sean): 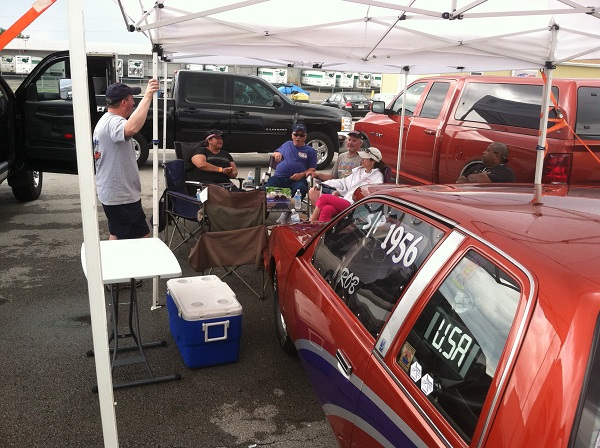 But……. notice the wet ground?  And also notice how everyone is crammed to the one end of the canopies so Rob’s car can get under the rest of it?  We had a lot of visiting while waiting for the rain to stop and the ground to dry up.  And then there was this: 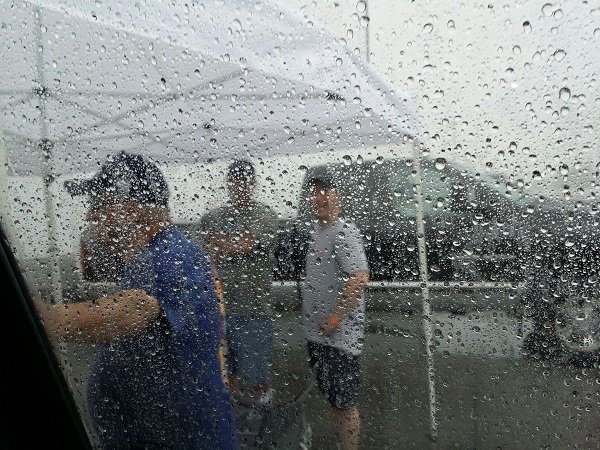 Not even the canopies could keep Rob’s car dry then.  Paul, Rob and Ray were left to literally hold down the fort (canopies) while the rain, wind, thunder and lightning happened (Thanks to Martha for thinking to take this picture! I was busy hoping the tires on the truck would absorb the lightning when it hit the truck.  And trying not to suffocate in the heat of the truck.)  Soon after this, we called it a day.  Which, the next morning, turned into calling it a weekend.  The event for Sunday was canceled because of the weather.
Here was our ride home: 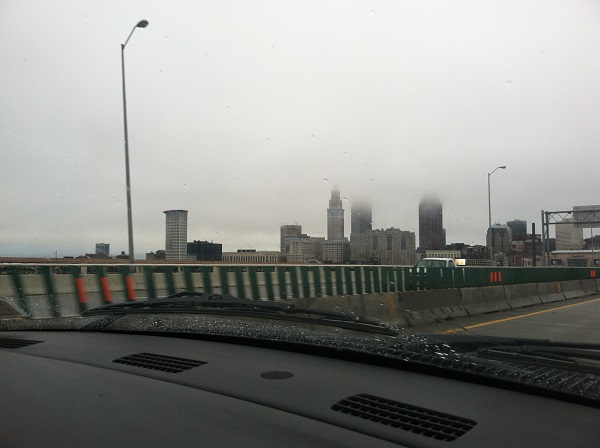 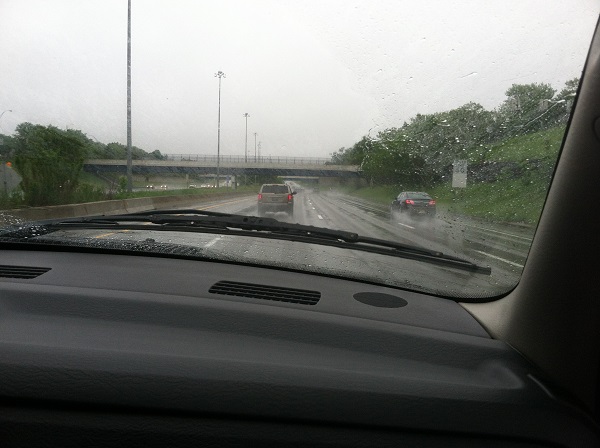 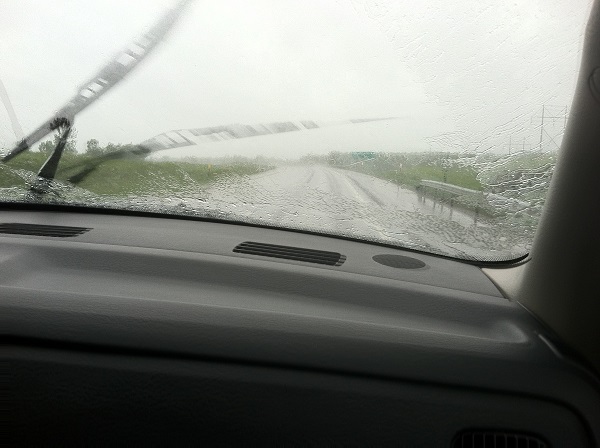 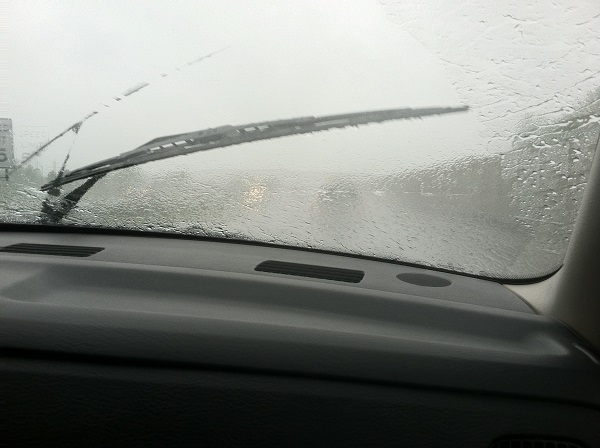 There was some knitting.  But not a lot.  The stars were just not aligned for me and knitting this weekend, what with all the rain and all the ice cream.

On the trip out, I did start a new project, Melodia, with my new Periwinkle Sheep gradient yarn which I am liking a lot and it is going along nicely: 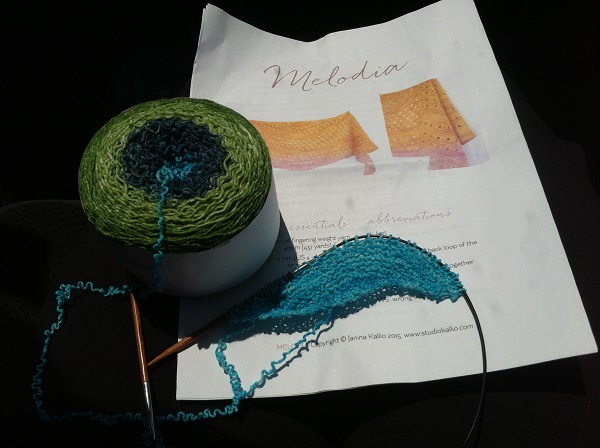 But on the trip home, there was this: 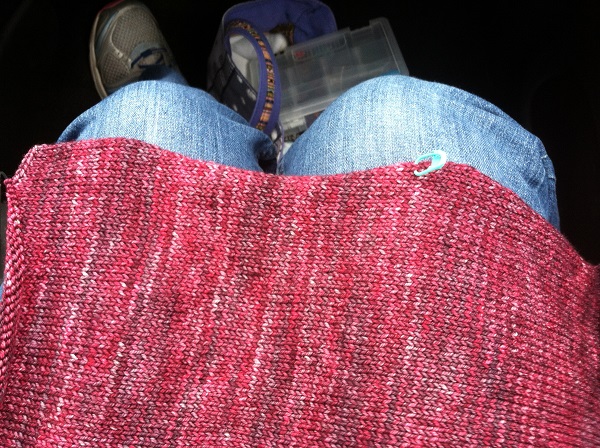 Remember my One Way Tee?  The one I had to rip out last weekend because of the mistake waaaaaaay back? Well, I had finally gotten it knitted back to the 15 1/2″ I needed before doing the armhole bind off.  Then I did the bind off at each armhole.  Then I checked my stitch count.  I was short by six stitches.  Which is exactly the number of stitches I was supposed to increase (again) waaaaaaaaay back when I started knitting again, after I ripped it out.  I was so focused on having to re-knit about 2/3 of the back, that I completely forgot I had done some decreases and then increases for the waist shaping. 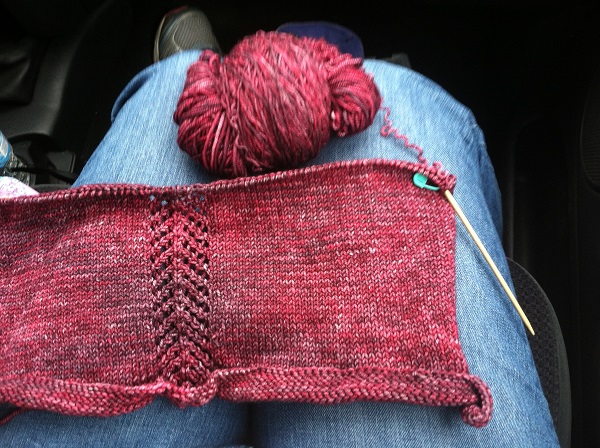 It is currently in a time out.  Paul thinks I should just focus on one project at a time, so maybe this wouldn’t happen.  I think maybe he is right (this time).