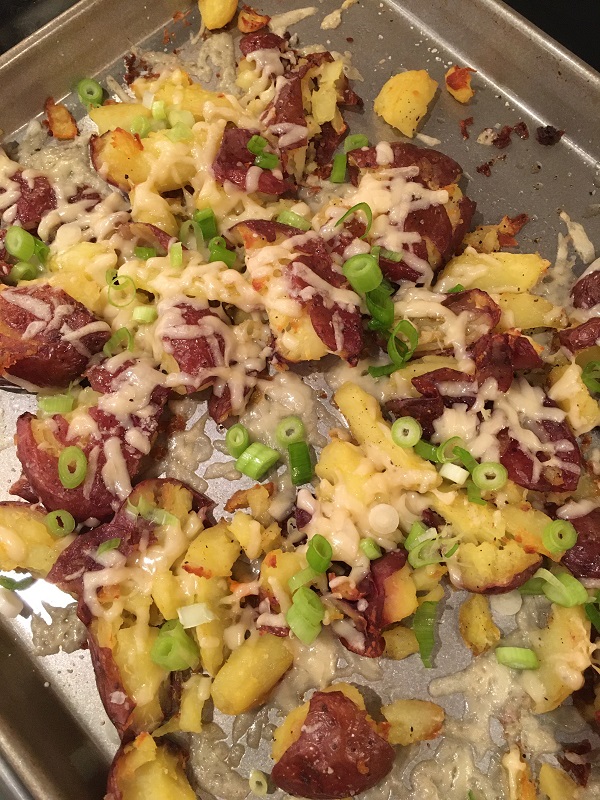 I LOVE Ina Garten (aka The Barefoot Contessa). I love her personality and I love her recipes. I will watch her show any time it is on TV (I DVR it), I follow her on Instagram and Facebook, and I have a bunch of her cookbooks.

This past Sunday I was determined to make a few meals that Paul and I could have throughout the week, so I dragged out all my Ina books and picked out a few recipes.

I ended up with recipes from these two books:

Both books have a lot of great recipes. You’ll see below I have put a picture from the book and compared it with my finished recipe.

). I picked this one because farro is very good for you with lots of protein and fiber, and butternut squash has vitamins and more fiber. And there is bacon. You can’t go wrong with bacon.

The hardest part of this recipe was cutting up the butternut squash. It is hard to peel and hard to cut. I bought two squash because I had no idea how much would equal 3 cups. Turns out the two squash I bought equaled 12 cups! I put about 4 cups in this dish, then froze the rest.

Next time I think about buying butternut squash, I will consider the already-cut-up packages in the grocery store.

Farro is an ancient Italian grain. The best way to describe it, is that it has a texture somewhat like brown rice. A little chewy. It took on the flavor of the squash so it really just tasted sweet. And chewy.

Mine turned out pretty much like the picture in the book!

However, I clearly added more parmesan cheese. One half cup just did not seem to cut it. Very tasty – I highly recommend this one!

Next up, Tomato and Eggplant soup (page 62 in Cook Like a Pro

). I was able to use some of my home grown tomatoes! Lots of veggies in this: tomatoes, eggplant, onion and fennel.

Since my home-pureed tomatoes were more watery that those that would come in a can (which the recipe called for), I added a small can of tomato paste. The other modification I made was to peel the eggplant (the recipe says not to) because eggplant peels are yucky.

Mine doesn’t quite look like the one in the book, but it is yummy!

This is not something we’ll eat as soup, per se. What mostly drew me to this recipe, is the suggestion for using it as leftovers with pasta in the Baked Pasta with Tomato and Eggplant Soup (page 83 in Cook Like a Pro

These are a little extra work because you have to boil the potatoes first, then smash them and cook them in the oven. But it’s worth the effort!

I think I cooked the potatoes a little too long because when I went to gently smash them, they just fell apart. It was ok, though, because then there was more surface area for the olive oil to crisp them up in the oven!

I subbed out scallions for chives because the chives I bought went bad in just one day. But the scallions are a perfect substitute (adding more onion-y flavor, if that’s your thing).

So now we have three wonderfully yummy Ina recipes to enjoy throughout the week!

Side note: over the weekend, we also made what we think will be our last soft ice cream run for the season:

This is a contactless ice cream cone. Just tip the cup over and the cone and ice cream come out so you can eat it like a regular cone!

came out last week! Can’t wait to get it.

I have also recently discovered @storeboughtisfine on Instagram – he is cooking every one of Ina’s recipes from all of her books. He has made 1011 recipes so far.

Do you do any meal prep? Let me know in the comments below!