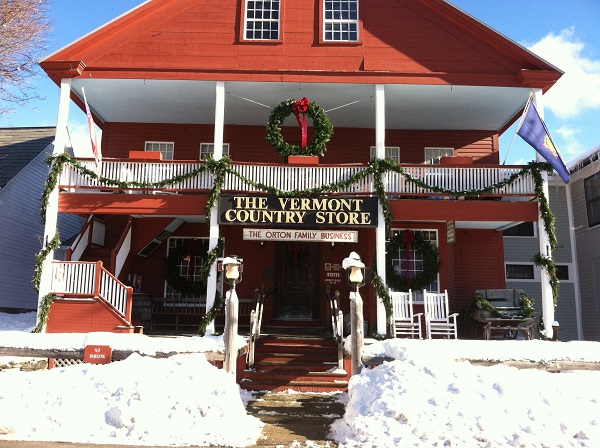 The craziness of this time of year is catching up to me.  I was going to show you a post about my busy knitting class weekend that I had LAST weekend. And then last weekend happened and now this weekend is coming to an end.  I think from here on out, possibly, maybe, things may be calming down a little.  Maybe.  Possibly. LAST weekend, I taught the Oatmeal Stout Cowl class: 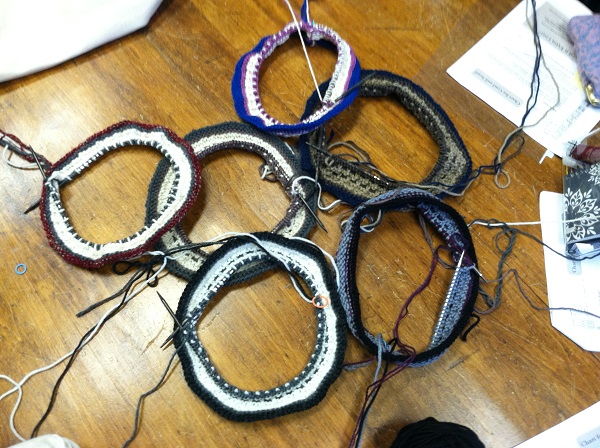 A full class of 6 people and they all got a good start! And then I finished up teaching the Colorwork Christmas Stocking class: 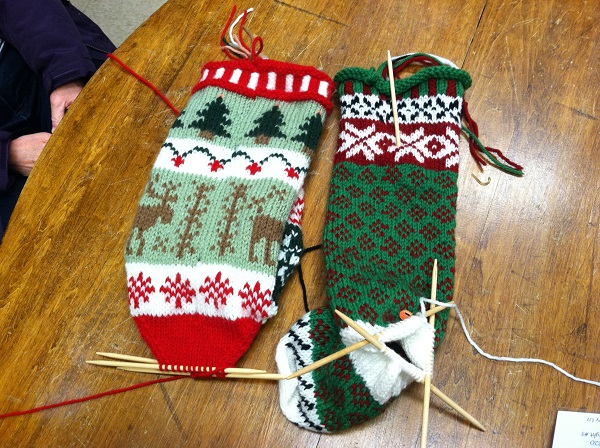 These are two of the four in-progress stockings. The next day I taught the Mobius Cowl class and apparently by the end of that one I was too tired to remember to take a picture.  A full class of 6 people and they were well on their way to completing their cowls. That weekend, there was also this: 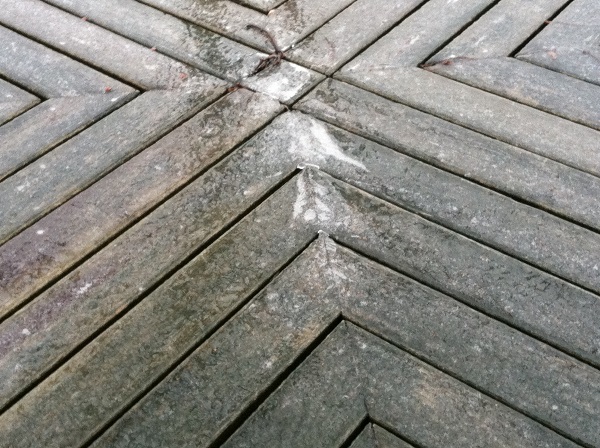 Which a few days later was followed by this, last week: 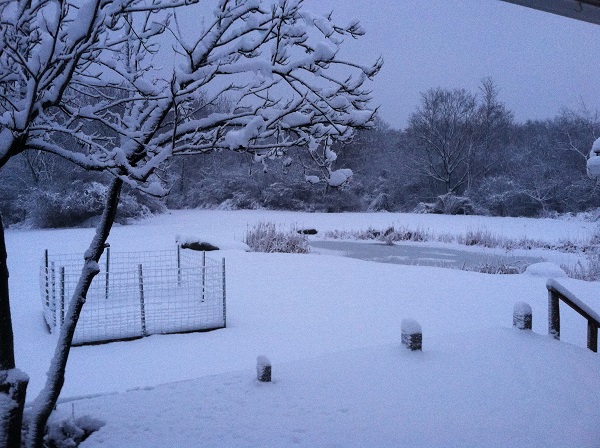 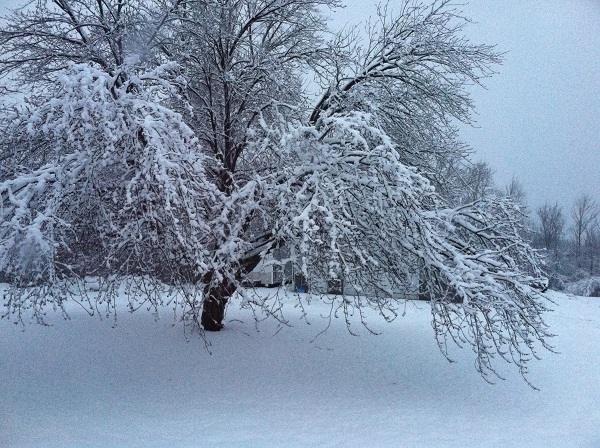 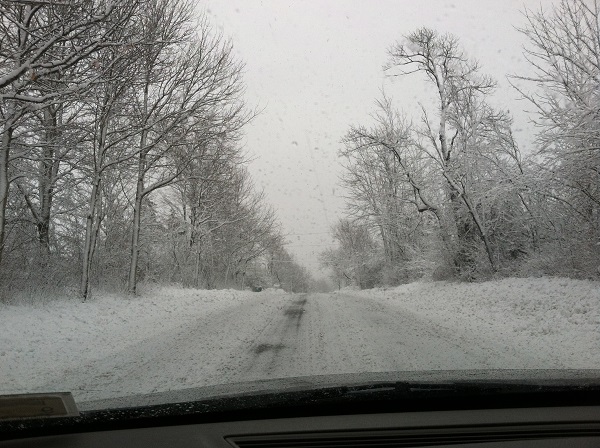 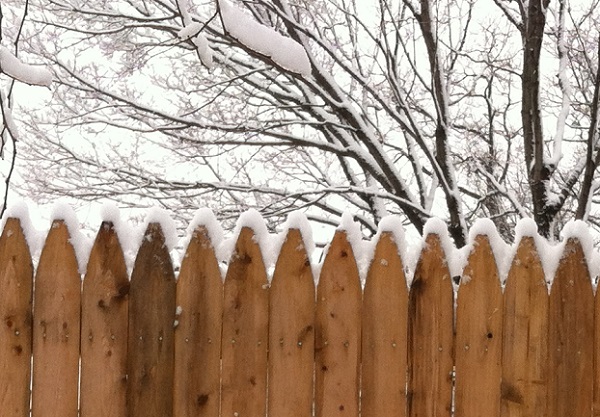 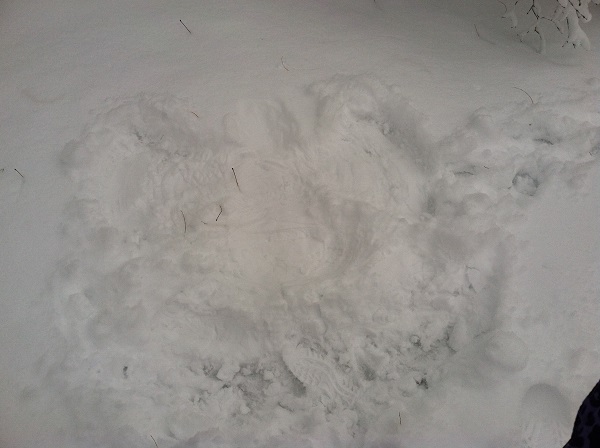 (that’s a snow angel up there) 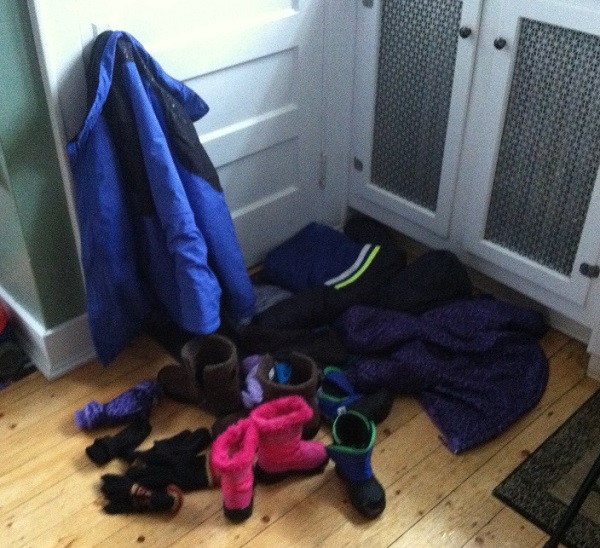 And then I finished up teaching another class, the Kaweah Hat: 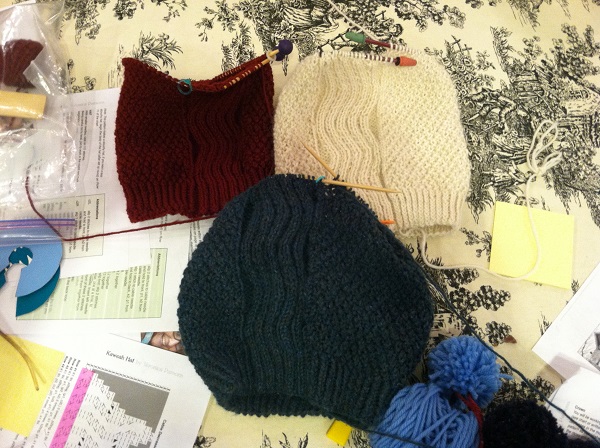 And somewhere in there, I was working on some Alaska Color Homesocks for my sister and things went terribly wrong: 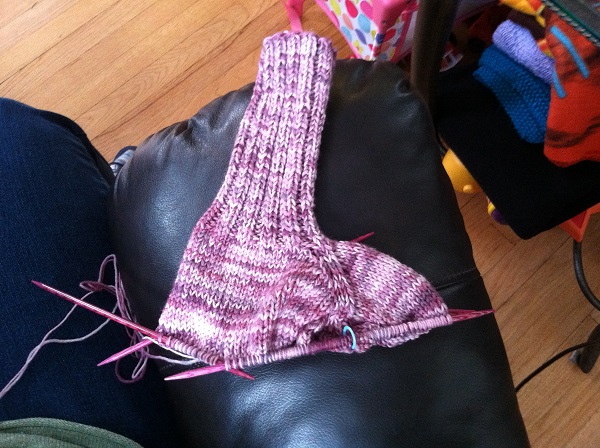 I read the instructions wrong, increased in too many places and ended up with that misshapen thing up there.  So…… 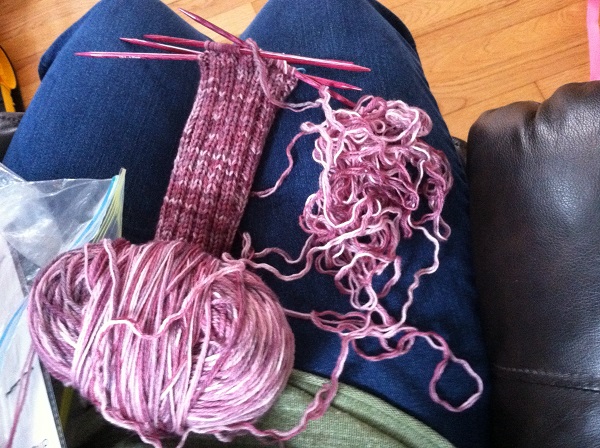 And now one is done: 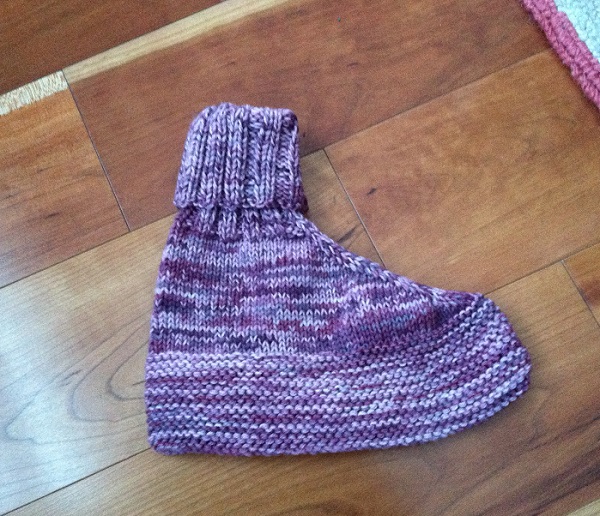 I know, still looks like  a misshapen mess right?  But NOW look at it: 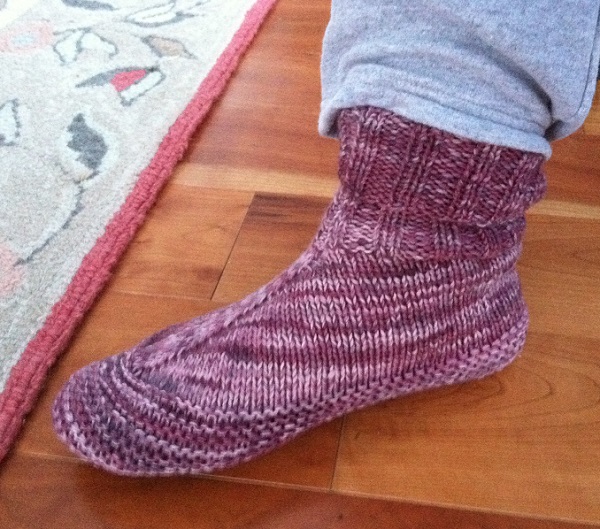 Pretty cool, huh? (They are very comfy.) And also, I worked on some holiday decorating: 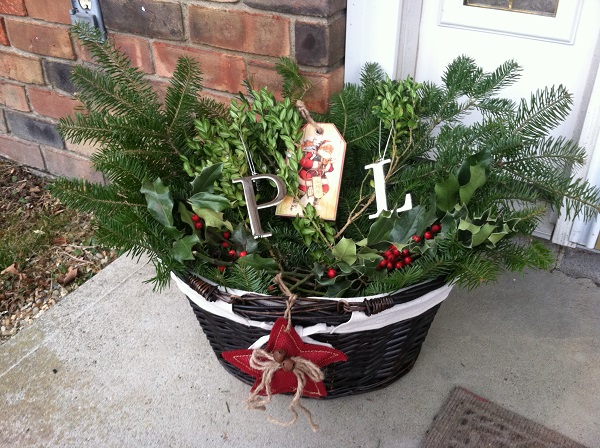 Then, THIS weekend…. I made Olive Oil and Maple Granola (granola is my new obsession): 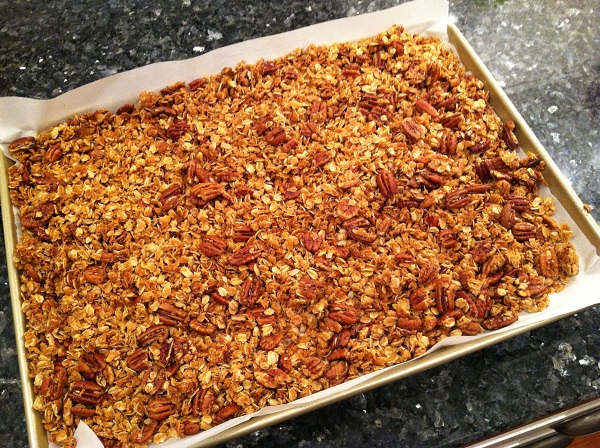 so, So, SO yummy!  (Don’t worry, I will be getting back to my cupcake obsession. Hopefully this weekend.)  I made the granola so I could bring some to our friends Elaine and Steve when we went with them to: 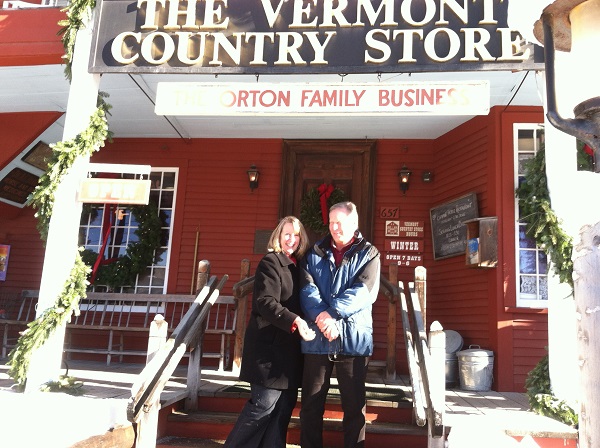 That’s Elaine about to throw snow at Steve.  But here’s a better picture: 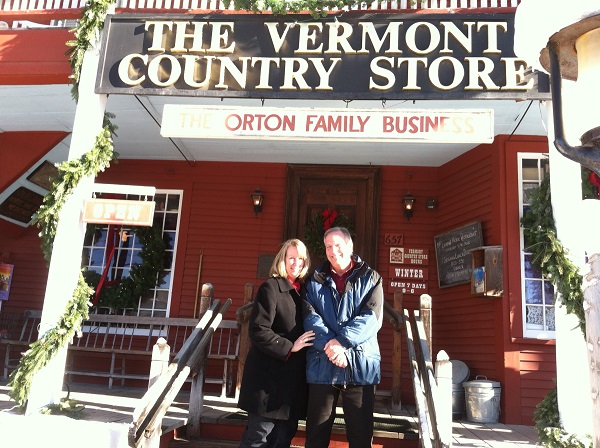 These two are tons of fun and we had a great time, driving up to Vermont and seeing the beautiful scenery: 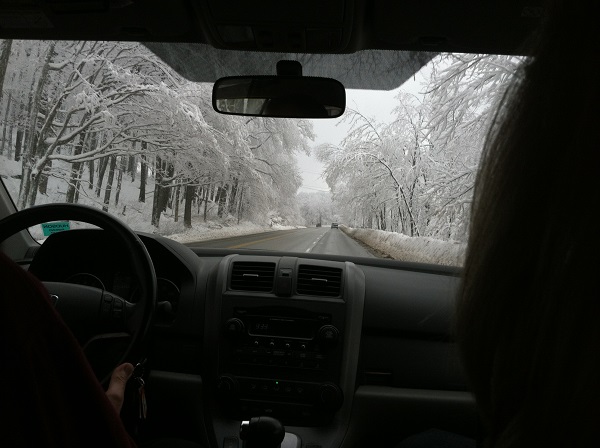 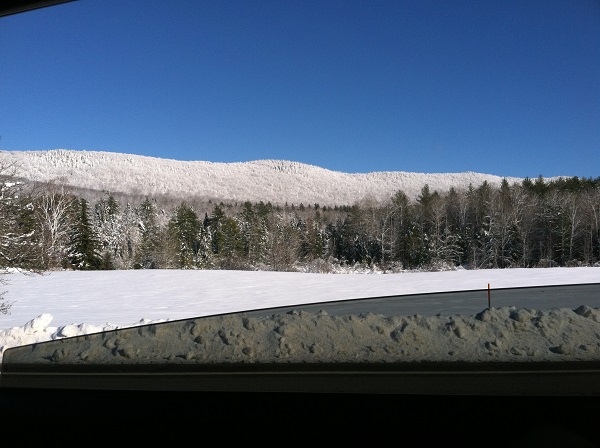 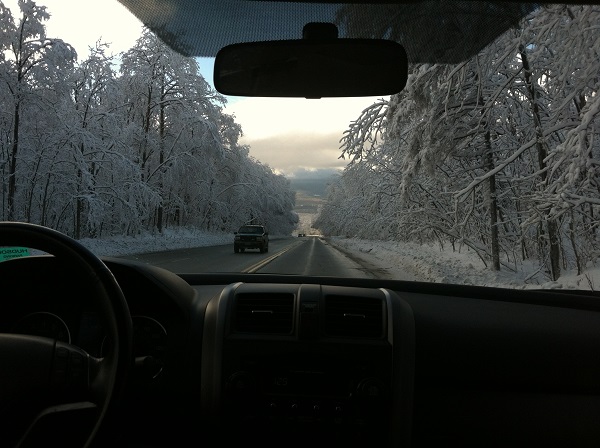 (Steve pointed out all these beautiful shots to take – and slowed the car down sometimes – so I could put them on my “blog-a-roony”.) We shopped and had lunch at the store.  We also stopped at a farmer’s market (at a local elementary school) on the way up and the way back to get maple syrup and fig-wine compote.  We were the first customers, there way too early while they were still setting up, AND the last customers, holding them up while they were trying to go home.  But it was worth it (for us, and we hope for them too) for the yummy goods. Then, Paul and I made our way back to New York, while they made their way back to Massachusetts. While riding in the car all that time I worked on a Christmas hat: 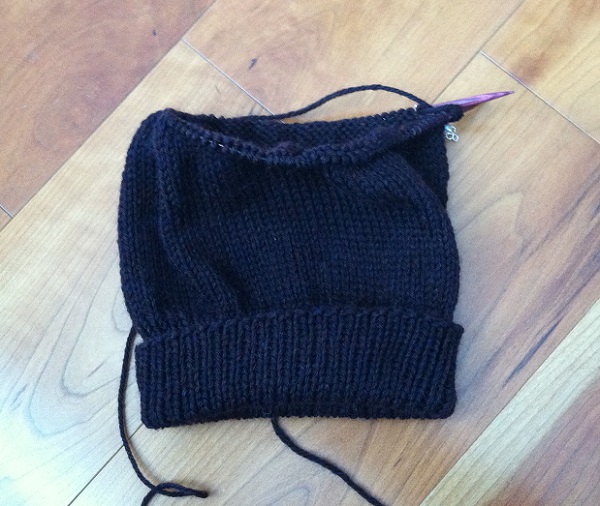 I knit all but about an inch of this in the car.  I was almost ready for the crown decreases this morning and decided to have Paul try it on, to make sure it would fit an adult.  It was waaaaaaaay to small.  AAAAAAARRRRGH!   So, I will still finish this because I am way too far along to rip it out, and it will likely go to Mr. Doodlebug next year, because it really will only fit a child.  And here I was, thinking I was just knitting it nice and tightly so that it would fit closely and be nice and warm.  So, it was off to the yarn shop to get a new skein for another hat. On my way there, I stopped at the Altamont Community Traditions Victorian Holiday Celebration to see the tree decorated by The Spinning Room: 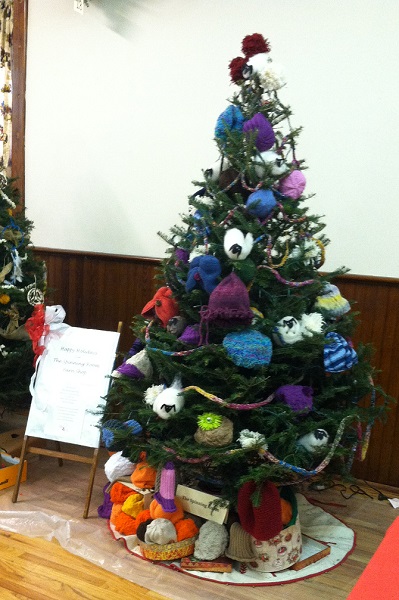 These are all hats knitting by the yarn shop customers (mine is in there somewhere!) and will be donated to Halos Of Hope. And then I came home and decorated our tree: 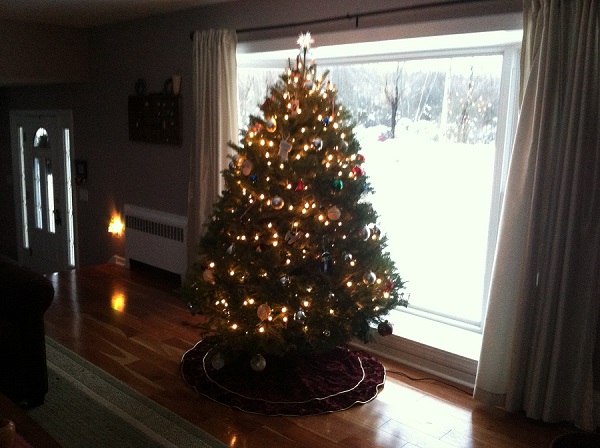 So, as you can see, things have been pretty busy.  And I suppose you won’t mind if now I collapse on the couch and watch Love Actually