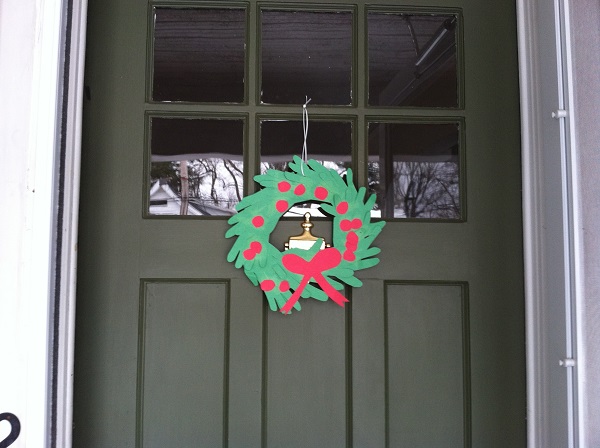 Have we met?  I’m a knitter.  Right?  I’ve been knitting for a loooong time.  And for the past 7 years I’ve been knitting practically non-stop and have 288 completed projects on my Ravelry page. Two. Hundred. Eighty. Eight.  So tell me this:  Why in heck can’t a get a basic hat knitted up???????

I finished the way-too-small-because-I-was-trying-to-knit-it-tightly-and-used-smaller-needles hat: 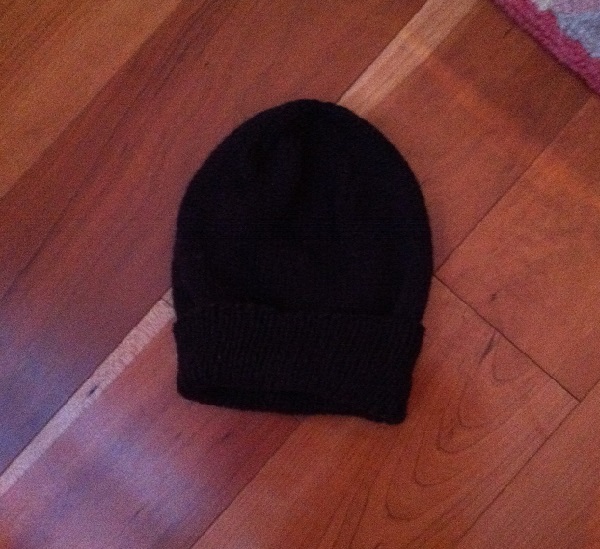 Then I cast on and knit 3 inches of ribbing on the now-this-one-will-fit-because-I’m-using-the-asked-for-needle-size-and-I’ve-added-some-more-stitches hat: 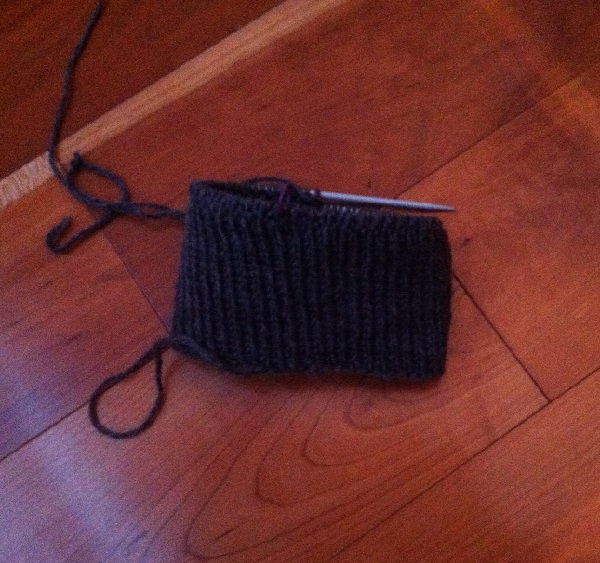 It is still too &@#$-ing small.  What in the name of sheep that give us this darn wool am I doing wrong?  I have no idea.  This is a new pattern, so maybe something went wrong there.  But the cast-on number seemed about right.   So, out it comes.  Again.  Paul said I should just buy a wool hat for this person.  Yes, other knitters, he said that.  He said that, and I gasped as if he had said the worst swear word ever said.  BUY A KNITTED WOOL HAT??????  How awful would I feel that I have knit more than 288 things, especially this, and I can’t knit a simple hat to give as a gift?

To his credit, he was trying to be kind, because he saw my frustration, especially after last night where for some weirdo reason, I didn’t sleep, and he knows I’m tired and running out of time.  So his second plan was to convince me to knit the hat that I knit for him several years ago that stretches out (it has alpaca in it) and is not warm enough for him (which it would also not be warm enough for the person I’m making it for because they have about the same amount of hair).  But we think maybe with 100% wool it will turn out better.  Can you guess how this might turn out?  Stay tuned.  Last resort is an I.O.U.  Especially because I still have one more gift-in-progress to finish.  I just don’t think I can muster the courage to buy one.

I did finish the Alaska Color Homesocks for my sis: 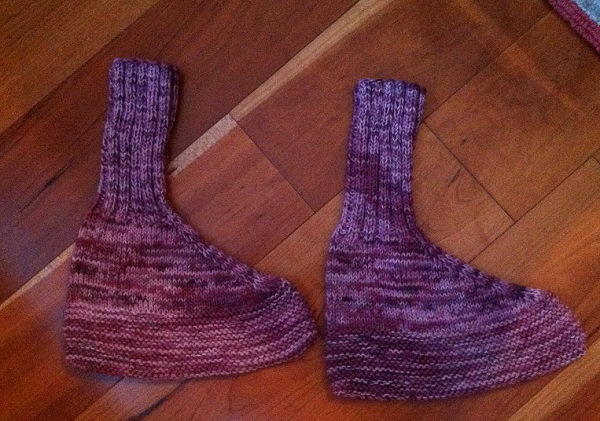 And on tap this weekend is to felt the slippers for my nephew.  Then it’s just the one other thing and “THE HAT”.

In crafty Doodlebug news, it was a crafty week:

A hand print wreath for the door ( got the idea here):

Q-tip trees for Miss Ladybug and me (Mr. Doodlebug was not interested): 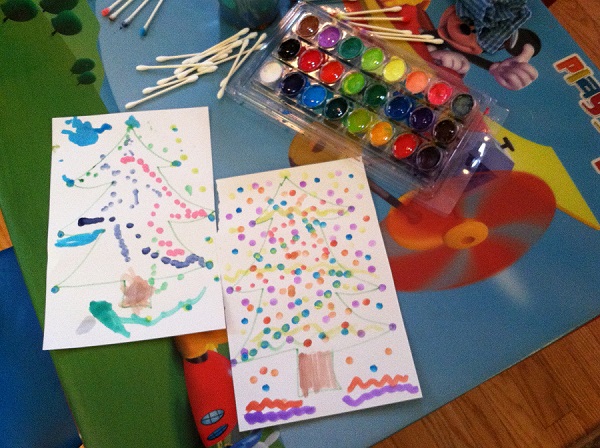 And construction paper chains for the tree: 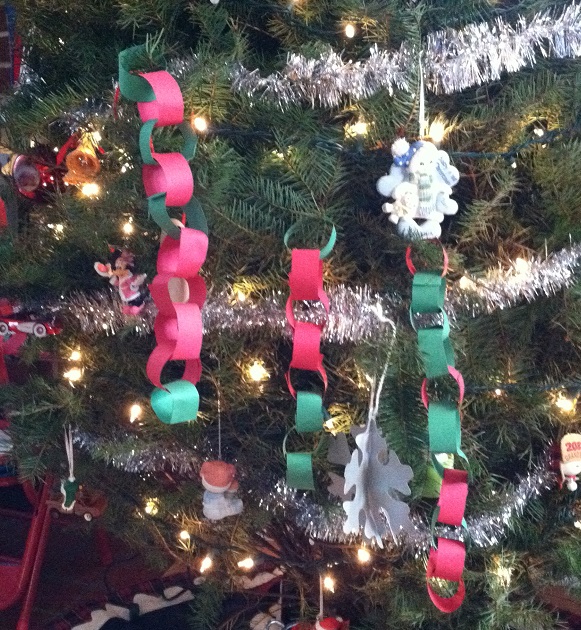 All while listening to Christmas music on Pandora.  Which really was a marathon of waiting for Frosty the Snowman to play. (It didn’t.)

And Paul did a little more decorating: 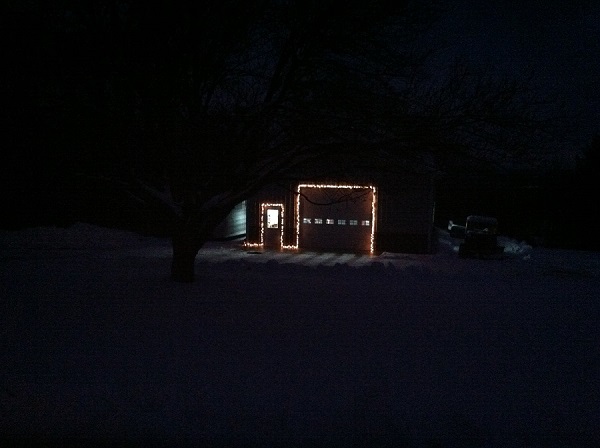 And it looked really cool when I looked out the window the other night when the big door was open, but I don’t think my camera really captured it: 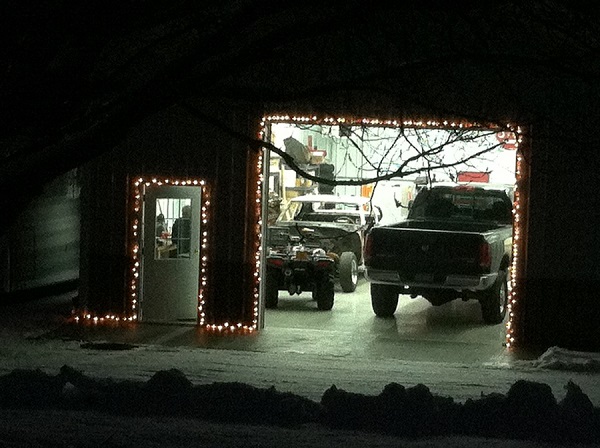 Some day I will get a better digital camera. (I always say that, but it’s also much more convenient to use my phone.)

Ok, off to The Spinning Room yarn shop to work for the day.  This is the last weekend before Christmas so you can only imagine what will be going on around here.  Knitting.  And also some baking.  But mostly knitting I think.  A hat, probably.