Paul’s car was invited to the GM Nationals Car Show in Carlisle, PA this past weekend.

We traveled there on Thursday, in order to set the car up.  Looking at the weather radar ahead of time we saw this: 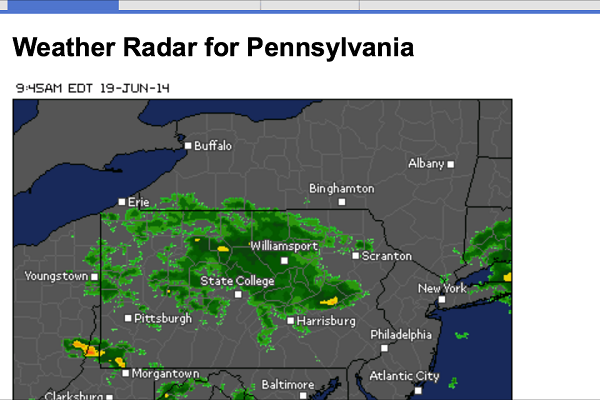 (we were going a little southwest of Harrisburg) So, we decided to stop in  Binghamton, NY to try and miss that big blob of rain. It’s a little stressful driving in the rain towing a big trailer with a heavy car in it.  We did some retail therapy… 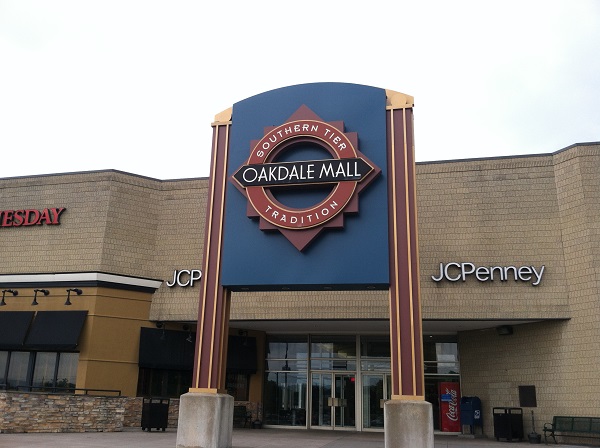 ….during which I successfully resisted the urge to purchase a Cinnabon which I love and there are none around where we live and I thought about it all weekend and regretted not getting one.  Then we went to Barnes and Noble for more retail therapy, had lunch and then we were on our way, hitting just a few sprinkles.  A successful detour all around.  Except for the Cinnabon thing.

On the way to Carlisle, I almost finished one of my Hidden Gusset mitts! 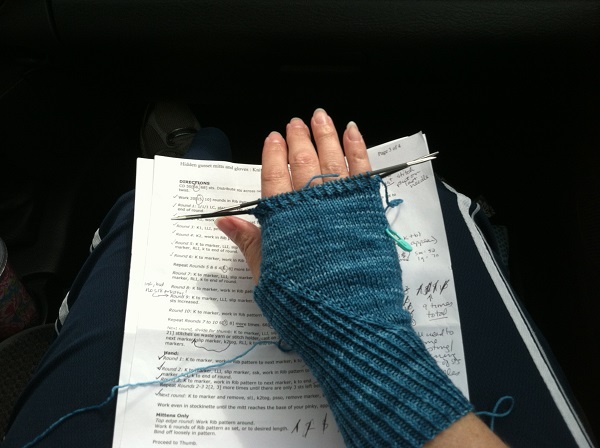 …but I finished it later at the hotel: 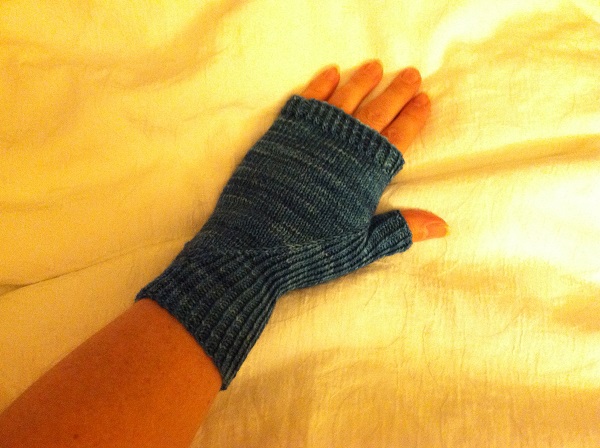 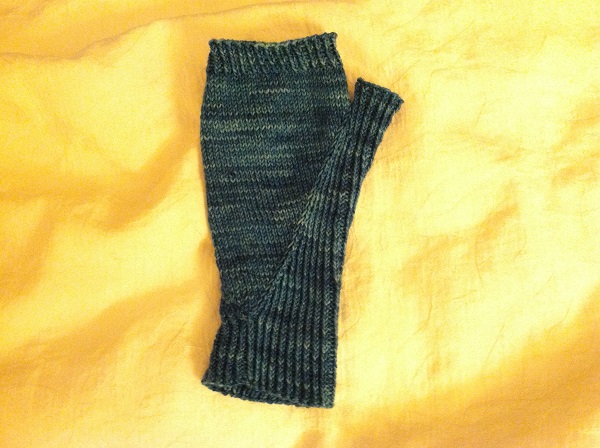 Then we got there and set up: 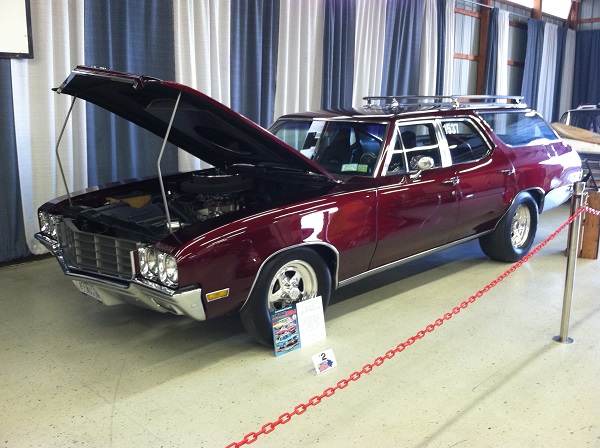 Because his car was invited, we got to display the car inside a building rather than out on the grass with all the other cars.  That was kind of nice since it was hot one day and it rained another day.

Since the car was just going to sit there for three days, we decided to do a few things in the mean time.  One was a trip to Hershey’s Chocolate World in Hershey, PA….. 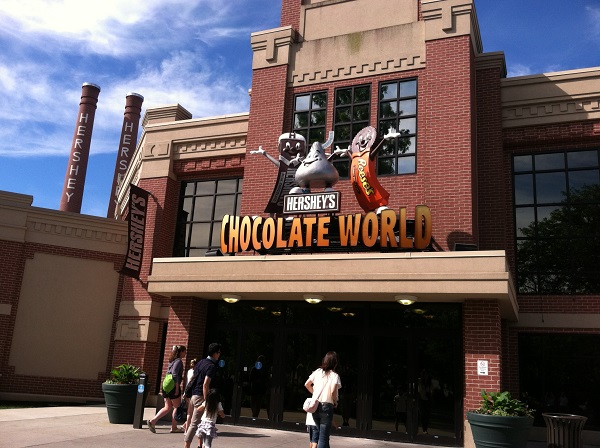 Where we may or may not have bought the largest chocolate bar available.  Five pounds.  FIVE. (Paul had to have it.  He’d been thinking about it since we were there two years ago!)  And maybe a few other things: 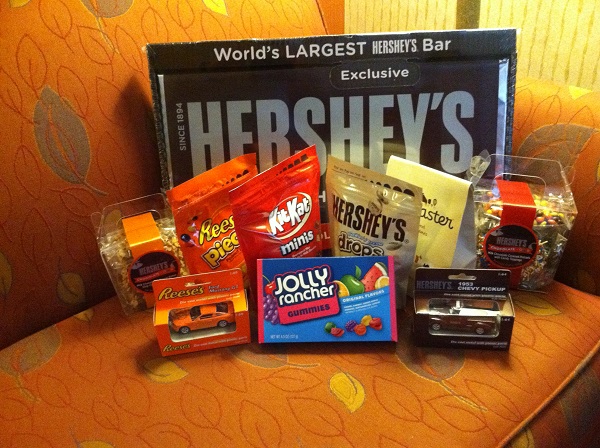 Despite all that, I still thought about the Cinnabon.

In between little trips to do this and that, we sat near the car and I got to knit while Paul talked to people about his car… 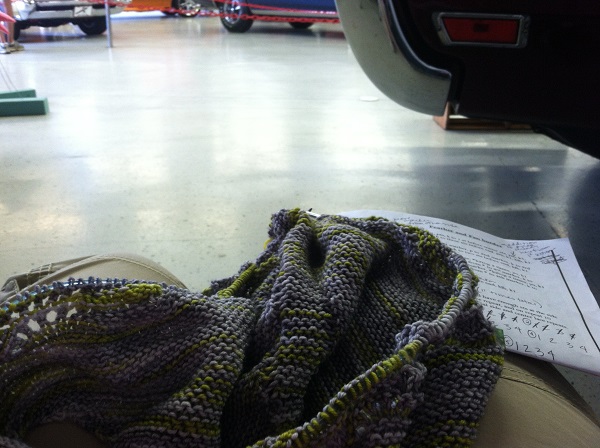 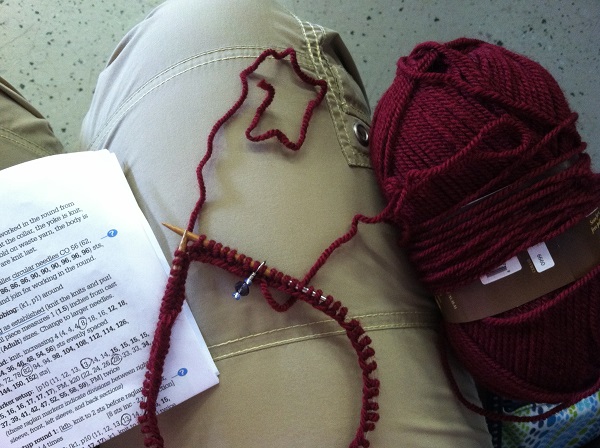 I had a few knitting setbacks which I’ll tell you about in another post. They were some doozy’s, let me tell you.  I’m blaming it on lack-of-sleep-at-the-hotel-which-was-very-nice-but-not-home-and-so-it-goes.

We did a lot of walking around looking at cars.  From a mile away, Paul spotted this car, which apparently is an excellent example of a “straight” car (meaning nice, clean lines, with no crooked stuff sticking out when you look along the doors and fenders): 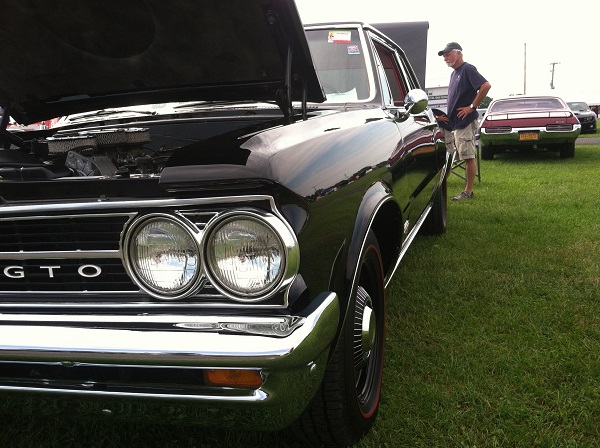 I still have no idea how he saw this from so far away.

And we spent a lot of time looking at examples and discussing what color the car that he is fixing up will be.  You might know the car…. the 1970 Buick Skylark which is “my” car that I didn’t know was “my” car when we drove to Ohio to buy it, but for which now I’m getting somewhat excited to drive since now I know it will have air conditioning.

There was this driving around, although we did not take a ride: 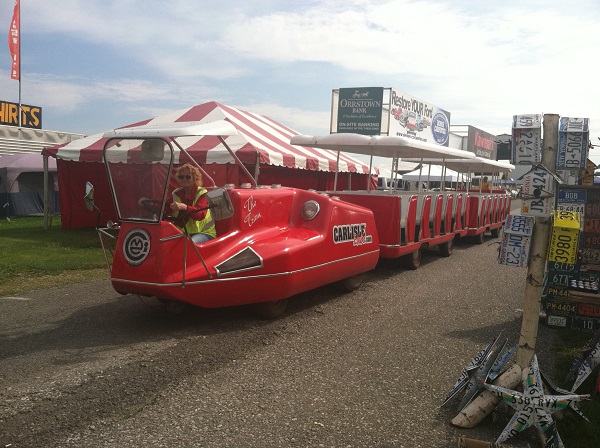 There was also a Smokey and the Bandit display, highlighting the Firebird (aka That Burt Reynolds Car): 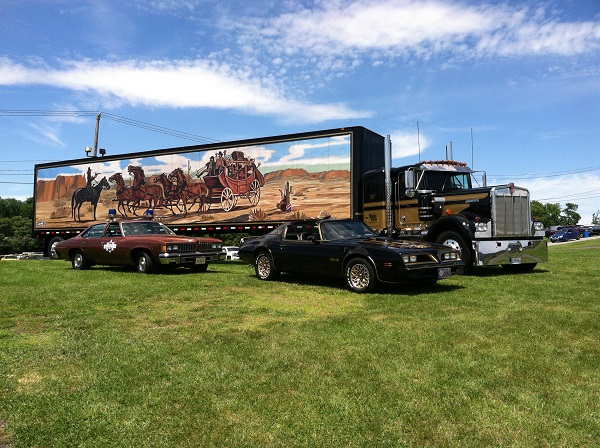 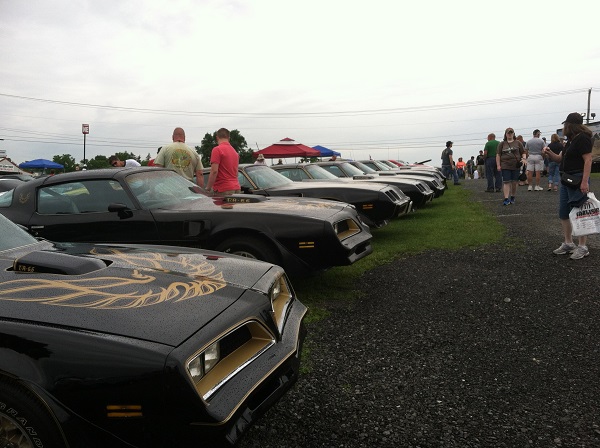 I have seen that movie but apparently don’t really remember any of it because I had no idea that tractor trailer (driven by “The Snowman”) was in it and was kind of an important part.

On Saturday we walked around the Swap Meet: 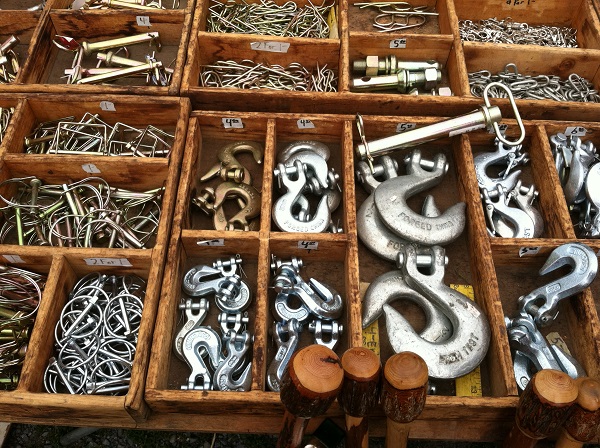 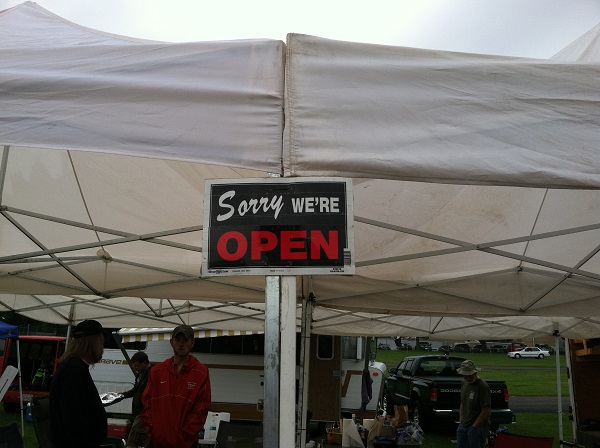 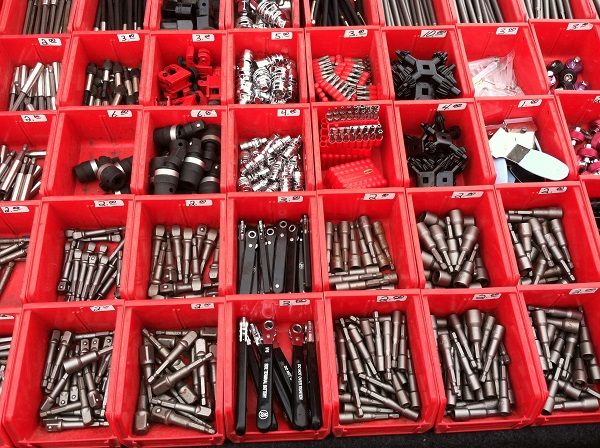 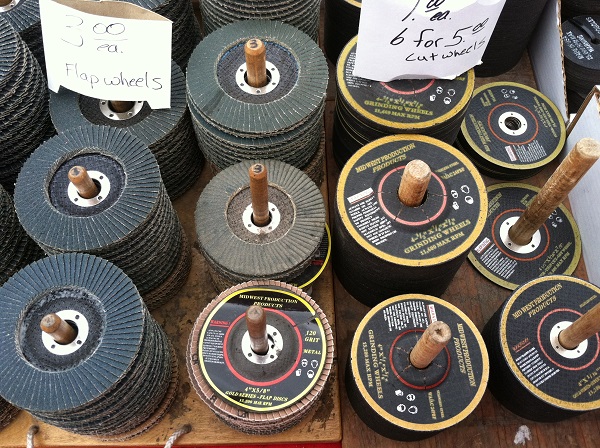 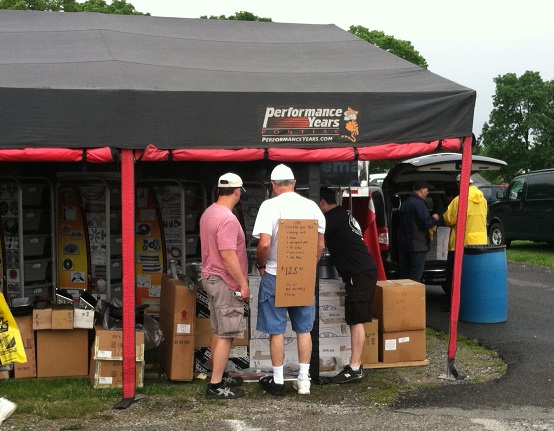 I have no idea what most of the stuff was, but I know that we bought 6 of those cut off wheels for $5 and we had already bought several of those recently at Home Depot.  Apparently this was a good deal and apparently he goes through them quickly.  Oh, and I got some socks.

And we also attended the Burnout Contest: 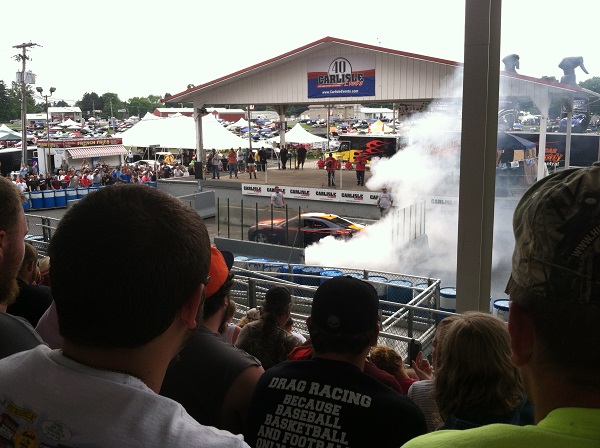 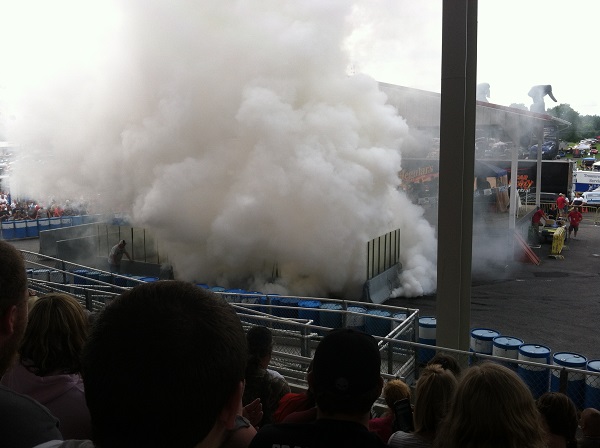 There is a car in there somewhere.  The winner was an orange 1970 pickup truck which continued the burnout for the whole three minutes allotted and managed to pop both tires, one of which shredded to the point of falling off the wheel.  Good times.

Sunday was the trip home and the most notable thing about it was the fact that I-81 in Pennsylvania and I-88 in New York are the bumpiest, most poorly maintained roads in the entire country (only going home) and by the time we got home our brains felt scrambled and we were sore from trying to stay in our seats.  More good times.

We had a great weekend but after that return trip, it’s so good to be home.

One thought on “Carlisle, Pee Aay”