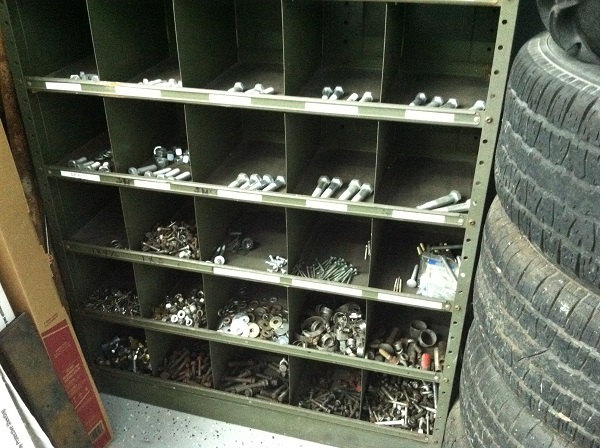 Reading the title of this post, you may be thinking this will be some sort of tutorial for what happens when you go broke.  Spend all your money.  None left.  Well, you would be wrong.

When a drag racer is going down the track and something happens to his/her car so that it needs to stop and be pulled over to the side of the track, you may hear people say “He/She broke.”  [This is different from when you hear them say, “He/She broke out” which means the racer crossed the finish line faster than he/she said they would and therefore lost the race.]  There is usually a collective gasp because the “break” is often times preceded by a puff of smoke out the back of the car.  Then there is a  collective “Ugh” when all realize this is probably a big deal, especially if the car needs to be towed off the track.

Well, people.  That is what happened to Paul this weekend.  Booooooooooooooooo.  I was not there to witness the carnage as it happened.  Only later, as you will see.  On his very first pass down the track, he felt some shaking then a noise, with that puff of smoke out the back and then everything stopped.

He came home upset, understandably.  While at the track, they were able to do a little investigating as to what happened.  They found this: 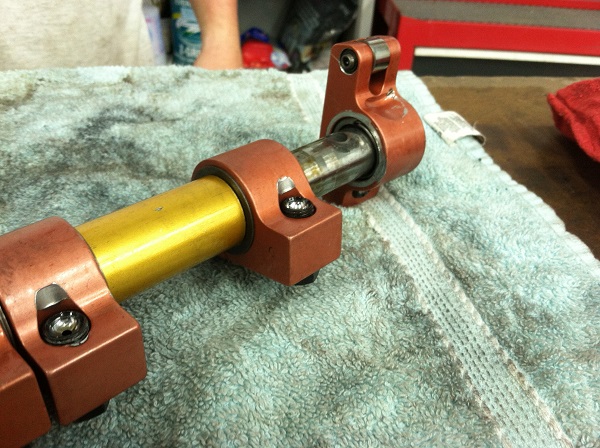 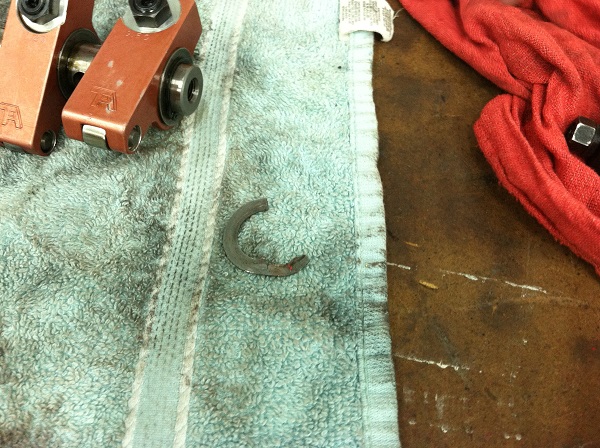 Bear with me in my not-very-articulate car parts knowledge.  But that up there on top is apparently a bent rocker arm with a crack in the circular part of the one sticking up.  Then there is half a circle that should be whole.

I felt terrible for Paul.  When the car does that, you just know it’s not something good and it could mean that the engine block got damaged and that is REALLY bad.  As in, need-a-whole-new-engine bad.  As in, a bazillion and a half dollars bad.  So, even though I don’t usually help with car stuff – except for helping to take off the hood or sit in the car and press the brake pedal to bleed the brakes – I offered to help.  What did he need help with you ask?  Why, pulling the whole engine out of the car, of course.  Easy peasy.

First was getting the car out of the trailer and into the garage: 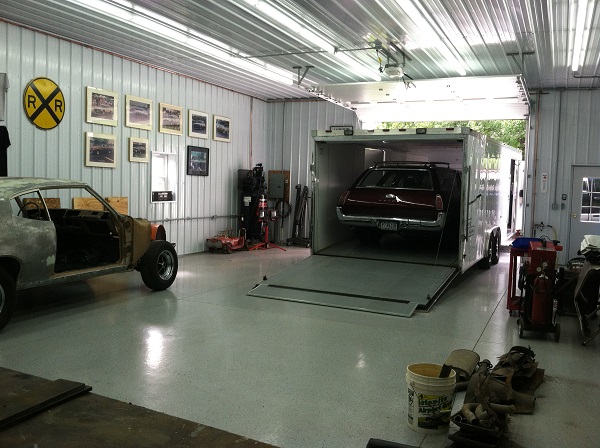 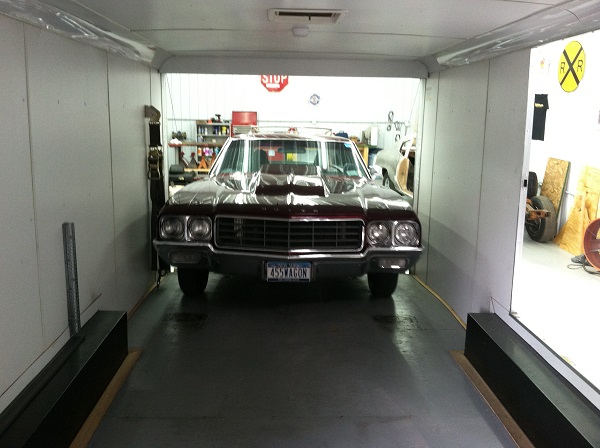 ….which was so much easier with our new garage.  Just one little push from me to get it rolling out of the trailer and it was done.  With our old garage, there would have been a ton of pushing up a humongous hill.  You know, the hill which is actually the lip of the concrete into the garage but seems like a humongous hill when you are pushing a 4000 pound station wagon from a dead stop.  [And also, as you can see, “my” car is no longer a priority.  Just pushed off to the side.  Literally.  Since it has no engine.]

I undid lots of bolts, as directed, and took lots of things out from under the hood: 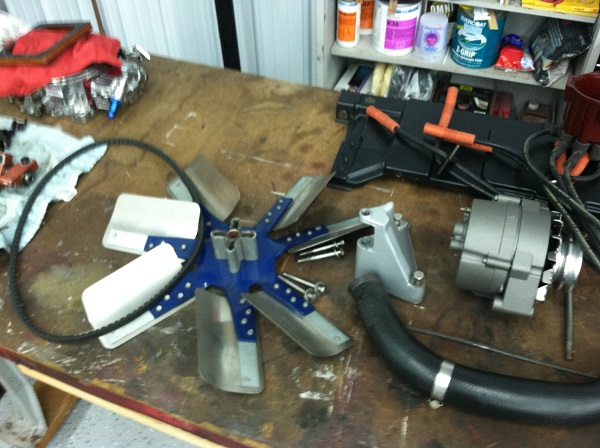 Aside from the spark created when I put a wrench somewhere I thought I was supposed to put it, all went well.

Then I worked the crane thing: 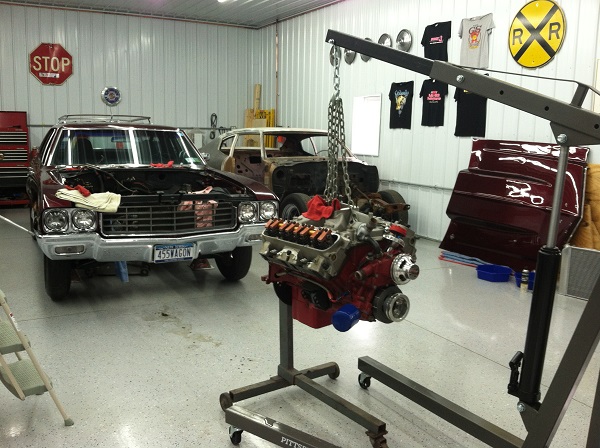 And it was surprisingly easy to lift that 500 pound thing out of the car. 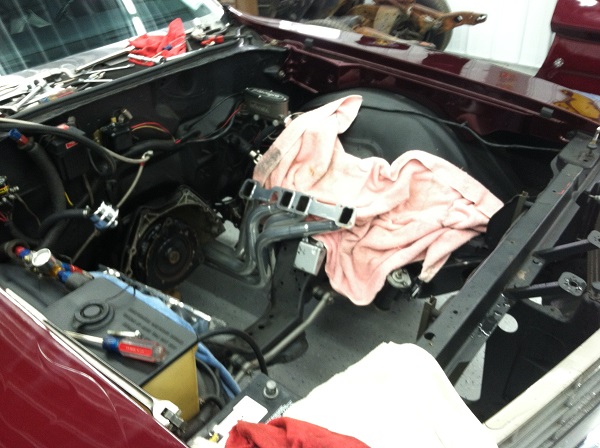 Then I went inside for a knitting break while Paul did some other stuff.   This is a good time to tell you I finished one of my knit-a-long socks: 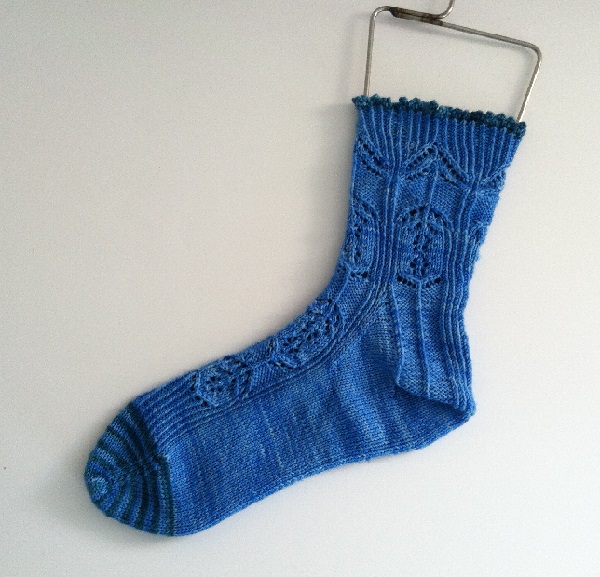 I’m well into the second one and will hopefully be done soon.  I’m getting a little bored of them to tell the truth.

I went back outside just in time for the big reveal of the carnage.  Paul took off some cover thing and we saw this: 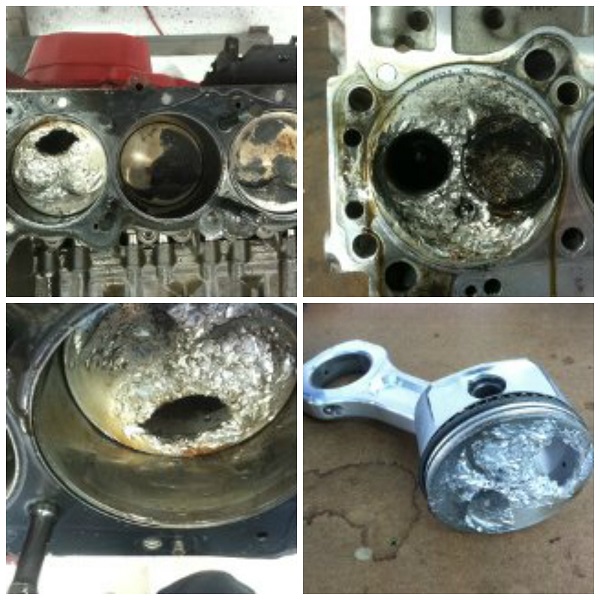 Top and bottom left, and bottom right are pictures of a piston with a big hole in it.  We could see right into the oil pan. (I think.)  Top right is the head, and the hole in the left side of the head is where a valve should be.  It was in the oil pan.(I think.)

If you non-car people aren’t yawning by now (the car people are on the edge of their seats, though), I’ll just let you know the good news and be done:  the engine block was not damaged, which means these things can be fixed and replaced.  If it doesn’t cost a bazillion dollars.  Now that I think about it, the title of this post could be about going broke….

P.S. This is how organized my husband the engineer is:

He used up all my label-making tape. [And also?  what does one do with all those “extra” nuts, bolts and washers?  I guess you never know when you’ll need one.  Or eighty.]