The fiber festival season officially began for us on Saturday when we went to the Southern Adirondack Fiber Festival at the Washington County Fairgrounds.  It was a gorgeous fall day, at a very warm 80 degrees.  Our drive up was beautiful since the leaves are changing in full force now: 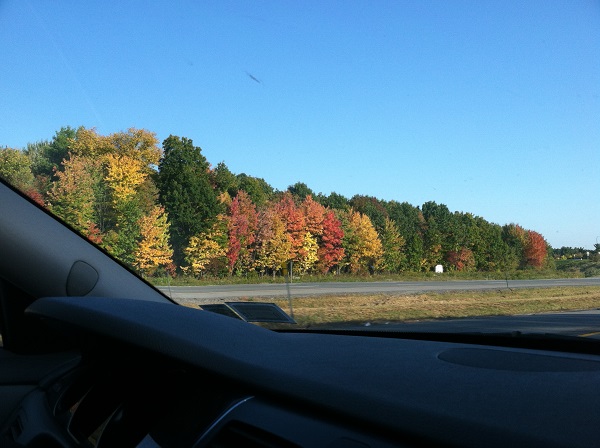 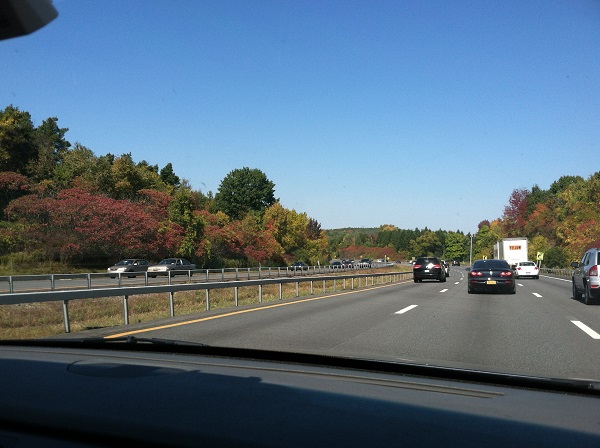 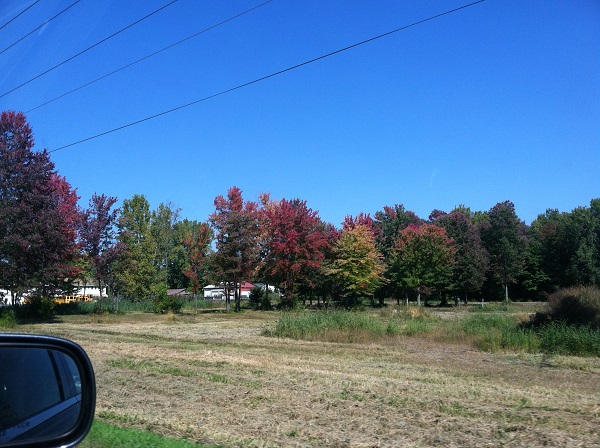 Still not “peak” but pretty enough for us!  More signs of fall once we got there, again despite the 80 degrees: 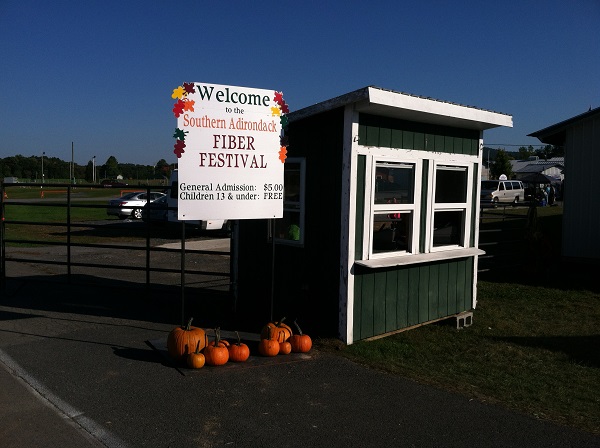 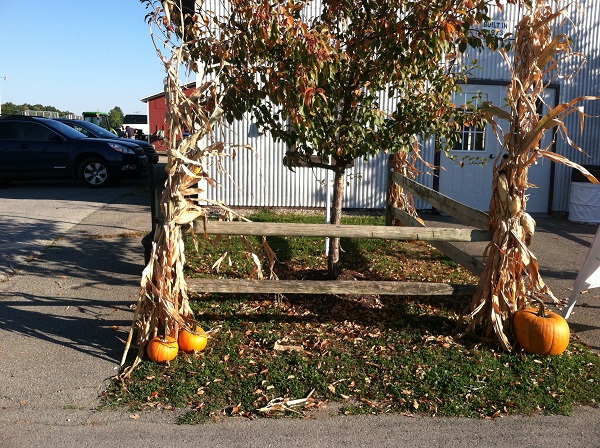 And definitely plenty of shopping to be had: 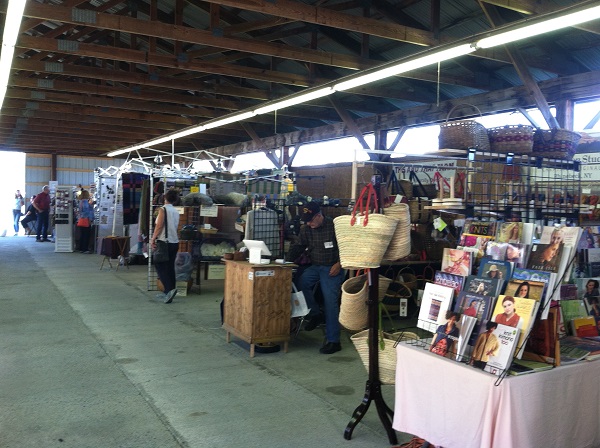 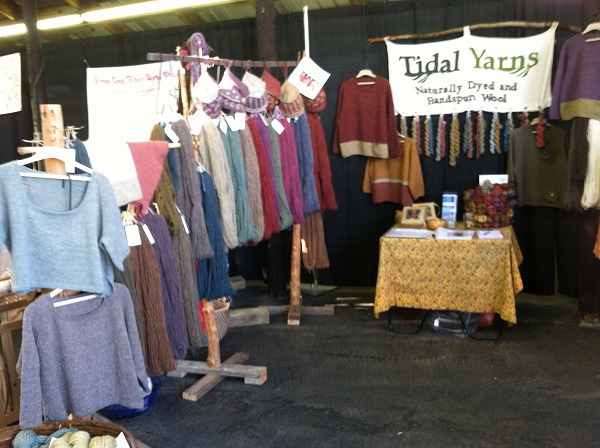 I may have gotten a few things: 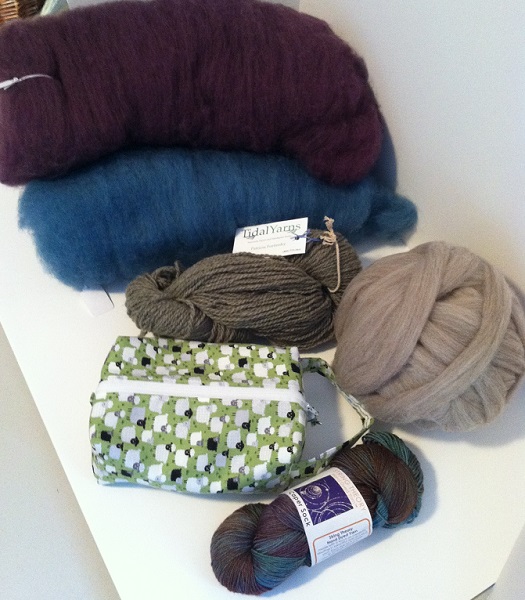 Naturally dyed roving from a booth whose name I can’t remember, naturally dyed yarn from Tidal Yarns, natural roving from Lyman’s Sleighbell Farm, sock yarn from String Theory (cashmere!) and an impossibly cute project bag from Stitched by JessaLu.   Add to that a clam roll/fish fry, ice cream, and cider donuts to take home, and it was a pretty successful day! (By the way, Lyman’s Sleighbell Farm yarn is what I used to make my circular shawl that won the big prize at the fair.  I lent it to them to use as a sample in their booth and it looked so pretty!)

Meanwhile, from the files of learning-a-lesson-you’ve-already-learned-before-about-knitting …..  On our way to the festival, I was knitting on my High Plains poncho, getting about 4 inches done on the way up.  We got back in the car to drive home, and I was thinking, “Cool, only a few more inches before I’m done with both sides and can seam them.”  Then I looked at it: 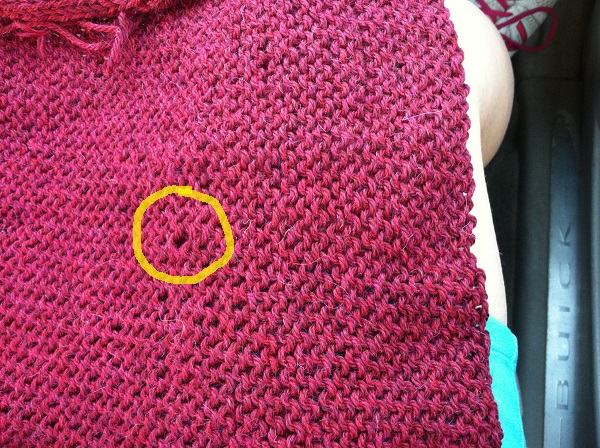 See that hole thing?  You might not think it looks like much.  It looks worse from the “right” side of the fabric.  I was too flustered to think about taking a more clear picture.  Right there is just after I started knitting when I got in the car to go to the festival.  I had to join a new ball of yarn and about 30 stitches in, there was a spot in the yarn where it was clear the yarn had broken and the factory re-joined it.  It wasn’t a knot.  If it was a knot, I would have undone the 30 stitches, cut the yarn and started that row over.  But it wasn’t a knot.   It looked a little thicker, as if the ends had been felted together.  I paused and thought about  whether I should go back, whether it would really be that noticeable.  The pause is the lesson I have learned many a time before:  If you are in doubt – don’t!  But I did.  I went on and kept knitting.  I totally forgot about it until getting back in the car, settling in, laying out my knitting to admire what I had done on the drive up, and it was screaming at me, “See??? Here I am!  A big hole! You shouldn’t have kept knitting!!!”  Since I’m knitting loosely with a large needle, that part of the yarn that is a little thicker because of the join stretches out the stitches even more, making a hole.  So I ripped it out and re-knit.  As we pulled into the driveway at home, I was exactly where I was when we got to the festival.  The whole way home, I was saying to Paul, “What a waste of time! I should have just fixed it right away!  I would be done by now!  Will I ever learn?”  Poor Paul.

Fast forward to Sunday night, when I actually was done with both pieces and seamed them together: 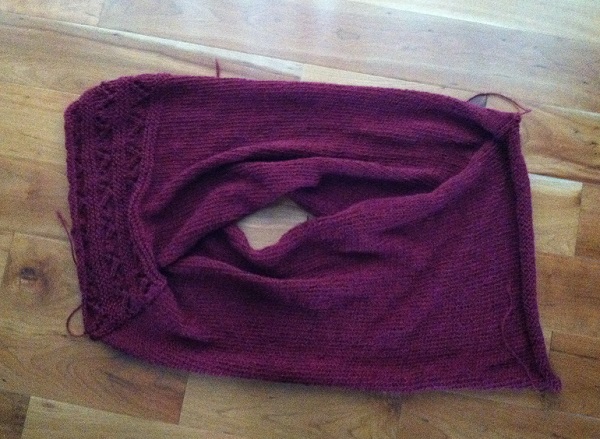 Now, on to the edging!

AND, we saw these two in the yard twice on Sunday: 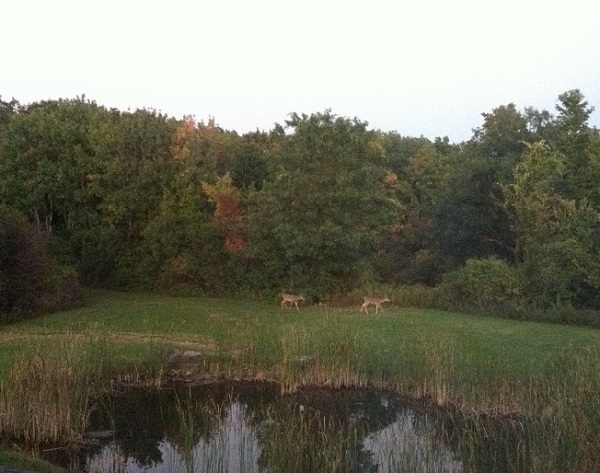 It’s hard to tell, but they are two bucks.  This is an evening picture and when we saw them in the morning, they were going the other way.  They seem kind of small and their antlers are certainly small (and one only had one antler), but we haven’t seen any bucks since we’ve lived here.  Usually we just see does and fawns.  Pretty neat.

One comment on “A Lesson Re-Learned (for the billionth time)”