I’ve said many times here on this blog that I really dislike swatching for gauge. And today I’m here to tell you I still dislike it, but I’ve been schooled in the need for it.

To me, swatching feels like wasting time and I just want to get to the knitting of the project.  I do know, however, that there are times when it really is necessary to do a swatch.  For example, when you are making a sweater or something else in which it is important for the item to fit correctly, you really should do a gauge swatch.  You really, really should… but often, I still don’t.

I think my knitting is “average” in the gauge department, meaning I’ve done swatches with the suggested needle size before and have gotten the right gauge, so why should I keep doing it, right? And for projects like a shawl or cowl, however, gauge is not as important because it could fit just about anyone and often there is only one size anyway, right?

That first question really is just pushing the issue and you really should do a swatch anyway for a project in which size matters.  That second question is what we are here to talk about today.

I started the Diamond Tempest Cowl with the wonderfully soft Baby Llama Chunky (both by Cascade) last week. 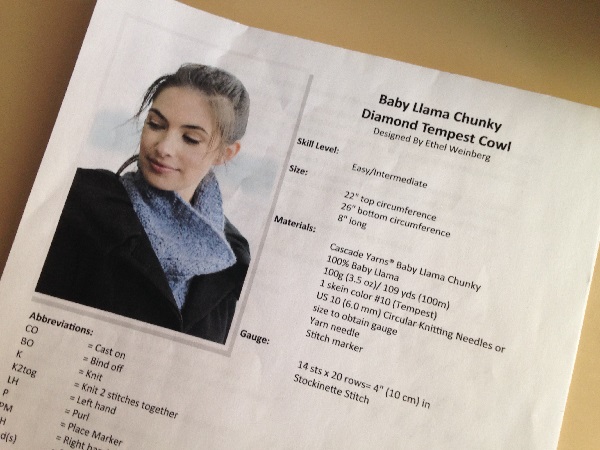 It was going along swimmingly.  The yarn was wonderful. The square needle was feeling great in my hands.  I was doing a little at a time and was creating this pretty pattern:

But then, I started looking at my ball of yarn and it seemed to be getting awfully small.  I had this gnawing feeling I’d be playing a game of yarn chicken.  Yarn chicken is when you are pretty sure you don’t have enough yarn to finish your project but you are really hoping you do have enough so you keep knitting, crossing your fingers and toes that you will have enough.  Then it’s just a game of seeing  who wins, you or the yarn.

With two pattern rounds and a bind off still to do: 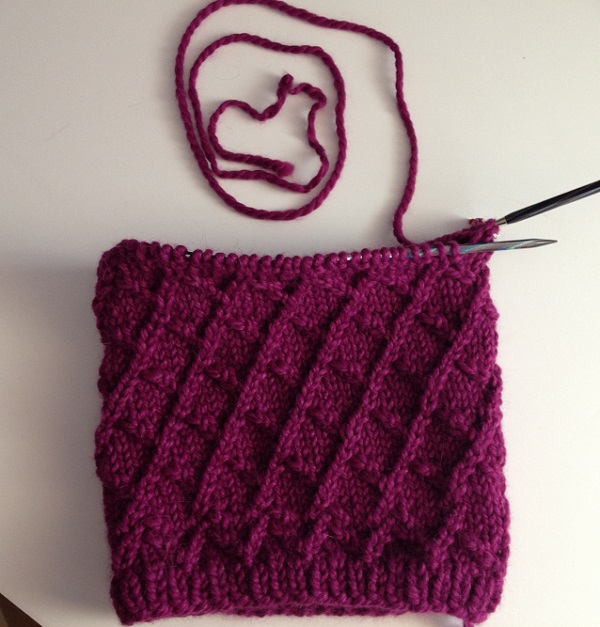 The pattern called for just one skein so why did I run out?  I thought about it for a bit and then I knew.  It was the needle.  I had done some reading about square needles and how they are supposed to be easy on your hands.  I also read that because of the squareness, the actual gauge the needle gets might be different than a round needle and many people have to go up a needle size in order to get the right gauge. So I chose one size larger for this project.  The project calls for a US 10 and I used a US 10 1/2.

You would think that a half millimeter difference in diameter would not make a difference but it does.  And you would also think that given the uncertainty of how these needles get gauge that I would check it –it was many people, not all people who had to go up a needle size.  And you would be thinking wrong because I blindly trusted that statement and didn’t give it another thought.

Once I realized my mistake, I put that cowl right into time out until I could stop being mad at myself.  And then I started this: 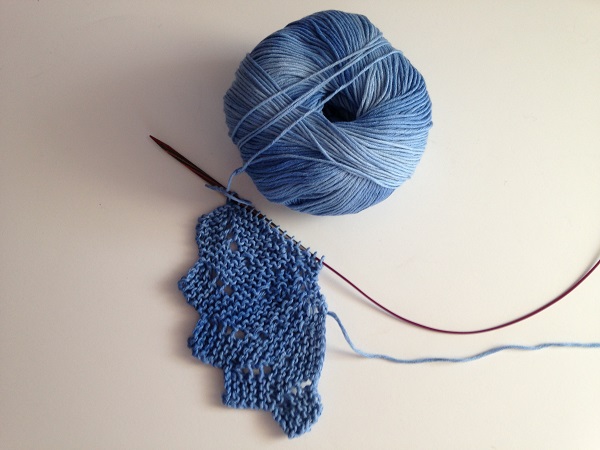 The Almost Lost Washcloth which will be an upcoming class at The Spinning Room this spring.  More about that when it’s done.

So, I’m now off to the ball winder to unwind the whole project and start again by doing a gauge swatch with a size 10 needle. [It’s really kind of ok, though, because if you look closely way back near the beginning, just after the ribbing, there is a weird section that I think I knitted wrong and I was trying to ignore it.]

While I’m doing that, take a look at what the Thrummed Mitten class came up with on Saturday: 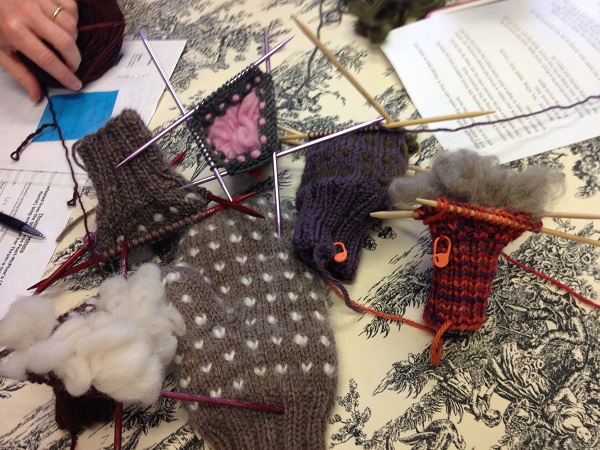 Do you have a gauge fail that you’d like to share? Or something you’ve been “schooled” in regarding knitting?   Tell us about it in the comments!