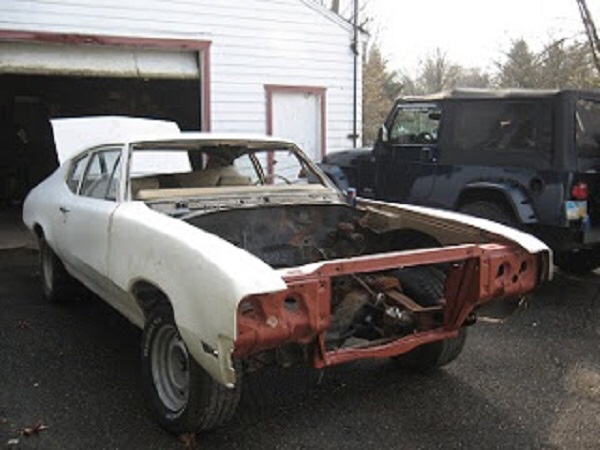 Over the past several years, I’ve posted periodically about the gutted car that has been sitting in Paul’s garage, which he informed me – after it was purchased, picked up in Ohio and brought home – was going to be my car. I couldn’t for the life of me understand why he wanted this car and was willing to go to Ohio to get it and it didn’t even have an engine.

Granted, I have known him for many years and his car obsession is akin to my yarn/knitting obsession. We have mostly agreed to go along with each other’s whims without too much questioning and have gotten used to the quirks of said obsessions.

Turns out, he knows a few things about cars and apparently saw its potential.

This was back in 2012. Yes, it’s been sitting in the garage for 8 years. I seem to remember a bunch of spare parts being loaded into the truck as well that day.

Paul’s grand plan is to fix this up so that it will run like a modern car but look like a classic car. Modern engine, AC etc. Before getting the engine and fixing up the inside, he is painting it. And before it gets painted, all the pieces have to come off.

Here is a conversation Paul and I have had several times:

Me: Tell me again, why do you have to take all the pieces off instead of just painting with it all put together? (Which would be so much easier and quicker.)

Him: So you can get the paint on all the inside parts.

Me: Why do you need to get paint on all the inside parts?

Him: Because when you open the door (or hood, or trunk or take the wheel off) it will look terrible if you see it’s not painted.

Seriously. Have you ever noticed the paint on the inside of a car door? The part near the hinges??? Anyway, one of those car things that I won’t understand. But again, it’s ok because……knitting. There are plenty of things he will never understand about that.

Here it is, primed and ready for paint:

Hanging these things up in the paint booth is the part of the process that I get to help with. Over the years, Paul has obtained various implements that help with the process. I like to take credit for this. It was my whining and complaining about not being able to lift heavy things (especially the hood – do you know how heavy that is???) that made him get them. Hey, I’m the only one here to help him, so “Help me help you” is my mantra.

Don’t get me started on the paint selection process. It is really hard to imagine a color you like on a car when you are looking at pictures on the internet.

If you know me, you know that purple is my jam. But for a car it couldn’t be just any purple. It had to be the right purple. I didn’t want something bright and crazy, like our plow Jeep:

I wanted something dark and subtle, but still purple. So, I settled on Plum Mist (officially a 1967 Pontiac color) and I love it!

In the sunshine, it is a little brighter:

It’s exactly the color I wanted.

Next post is going to have some works-in-progress progress!

What is your obsession that some people don’t understand? Let me know in the comments below!

A Knitting Class on ZOOM??